It’s funny how just about anything that you put up for sale (vehicle-wise) puts up a fuss and fails to cooperate when it is given the opportunity to move onto greener pastures.

After countless hours of building/rebuilding just about the entire derelict CL90 chassis, which was married to a S90 gas tank and half of the engine, the bike failed to start up on the night before it was to be picked up.

This funky bike’s story continues on with the buyer contacting me from a Craigslist posting, showing interest in it, but he lived 500 miles away in San Jose. Just last week, I was able to secure a PNO title only for the bike after repeated inspections. Once the pending title was secured from DMV, the buyer stated that he was coming down to San Diego and would pick up the bike with his rental car; in this case a new Toyota Highlander! After some “negotiations” for an even greater discount of the $995 asking price, (including boxes of spare parts), he did show up early on Veteran’s Day morning ready to test ride it before concluding the sale.

Almost as an after-thought I decided to check ride the bike once more, only to discover the “non-starting” gremlin had returned. The bike had run beautifully after jetting was worked out, with easy starting and a nice steady idle. Suddenly, we are back to square one with no spark to the plug. In the process of troubleshooting the problem, I used a screwdriver to flash across the open points in order to complete the ignition circuit. It worked randomly, acting somewhat like a failed condenser. Prying the points apart with the screwdriver tip I sensed that something was amiss with the ignition points.

Moving them open with the screwdriver revealed a sense of sticking on the contact arm.
This ignition plate was the original S90 part which was once submerged with water, leaving a high-water mark on the inside of the points cover and across the point plate. The plate was disassembled and soaked in a rust neutralizer solution to help recover the surface condition. The points were left in place during the process and the refreshed point plate reinstalled into the cylinder head opening. For the most part the ignition worked okay, but randomly it would lose spark and there was no clear clue as to what/why this was happening. Once the point plate was removed from the cylinder head, the point arm could be more easily moved on the pivot pin and it was apparent that this was the problem for the point’s motion failure. With the points removed from the plate, the tiny screw hardware for the point wire was removed and the point arm gingerly pulled off the pivot pin. There were signs of corrosion inside the point arm sleeve bushing and certainly greenish corrosion on the pivot pin, as well.

The pivot hole was cleaned with a quick pass of a drill bit, while the pivot was scrubbed up and lubricated. When the two components were reunited, the pivot action of the point arm was greatly improved. The point plate was all reassembled and placed back onto the cylinder head cavity. The point plate had been marked as to where it was located in the head to set the initial timing, but when the engine was kick-started there was no immediate response apart from a very loud backfire BANG! The dyno cover was removed to allow access to the rotor markings and the engine turned over with a 14m wrench. Suddenly the ignition timing was about 40 degrees late and the points were barely opening at all. Apparently the clean-up pass with the drill bit overdid the arm’s original ID and now the points were somewhat loose on the pin and the point gap was nearly zero.

The engine was turned over until the point cam was at the highest location and the points re-gapped to the normal .014” or so. The adjustment slots were at the end of the travel, but it was just enough to get them into specifications again. With the point plate shifted appropriately, the firing marks lined up once more. The engine covers were re-installed and the bike started on the first kick. Well, that problem was solved, but the neutral light hadn’t worked since the bike was put back together again. Opening the headlight found a bulb socket with a tiny blown 6v bulb at the end. These are very uncommon bulbs, not to be found at an auto parts store. Digging back into the S90 spares, the old speedometer had the bulb and socket/wire still attached. Luckily, the bulb was still okay and finally the neutral light turned a nice soft green color again. That was as far as I could go with the bike, so I took the tools back to the shop and awaited my customer’s arrival.

After his test ride and inspection of the paperwork I had on the machine, we tried to wedge the bike into the back of the Toyota SUV. Unfortunately, the back seats did not fold down fully, but did tip forward somewhat. We had drained the gas tank and removed the battery so the bike could lay on the right side away from the crankcase vent passage on the left. The rear tailgate wouldn’t close so the front wheel was removed while the bike was lying in place and that gave enough room to close the rear door safely. Finally, an hour after their arrival, the happy couple drove off into the horizon with the CL90 nestled in the back of their rented Toyota Highlander. Their next stop was Sea World, then off to San Jose on Saturday where the little CL90/S90 hybrid will find a new home with an enthusiastic owner.

In the end, I think I broke even just for the investment in parts and services while the bike was revived. If it had been a customer repair job, the labor charges would have been close to the selling price alone. While being retired doesn’t require that a profit be made on every one of these rolling waifs, I do need to be a lot more selective about what to revive and what to let go as-is with a “Sorry, I can’t do that this time!” 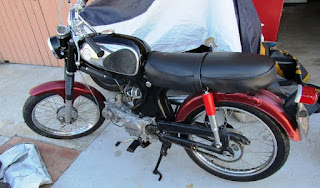 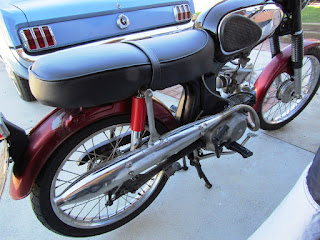 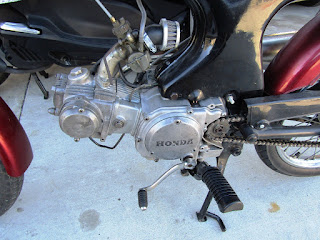