The Beast within the Beauty; CR93 Replica tales of woe

This was the first of two bikes that “came back” to me after ownership in the 1990s. It showed up at the recent Mecum auctions in Las Vegas, quite by surprise and completely unannounced. An impulse buy had it in my possession after spirited bidding, but I had no idea of what I was really buying until after the deal was done.
In the first go-round, the bike came to me from Utah, brought to my home in San Clemente in the back of a Honda Civic... really! We had to reassemble some of it, but it did turn out to be a pretty cool piece, but was somewhat unfinished in many ways. At that time the whole bike was CB160-based. While I owned it, a CL175 5-speed “sloper” engine was sourced from somewhere and eventually was shipped up to a new owner in San Francisco who saw it at an AMA-AHRMA event that I attended.
The bike slipped my mind for many years, but at some point I was messaged about it awhile back, asking if it had been mine at one time. Life goes on and the bike disappeared from my radar until 2017 at the auction. The bike showed up the night before the auction day and was not included in the catalog or any other preview information. It was just wheeled up to the auction block without fanfare, but I knew that it had to have been the bike I sold so long ago.

It had been announced at the auction as a CR93 replica with a CL175 5-speed engine, so obviously quite a lot of work had been done to it over the past 20-something years. After the auction, I returned to the holding area to look at what I had spent a large amount of dollars on and was pleasantly surprised to see the overall quality and workmanship of the end result. The early-version CL175 engine was mostly sand-cast and had been assembled pretty much with a rudimentary cleaning of the outer surfaces, but nothing that indicated an attempt at a 100 point restoration.

The chassis was powdercoated; nice polished AKRONT rims were mounted up on refurbished hubs and brake plates. Modified CB77 footplates carried some solid alloy footpegs in the most rearward position on the mounts. I discovered that I could barely manage the footpeg positions now, due to having both knees replaced which have more limited flexion than before. Otherwise, the overall fit and finish seemed to be well executed, but I couldn’t run the engine inside the facility so the engine condition was unknown. Based upon the overall look of things, I surmised that the bike had been fully finished, tuned and ready to run at the turn of a key.

While a stock CL175K0 bike engine was not originally fitted with an electric-starter, the CB160 starter parts will retrofit into the CL175 cases. So, thankfully, this bike was fully outfitted with an electric starter and even had an electronic regulator/rectifier installed. The little turn signals were replicas of Honda’s original CB72 lamp assemblies from the early 1960s, as used in domestic markets.

I hustled the bikes back to San Diego, off-loaded the CR93 and another auction purchase and then fired up the little Honda for the first time. It started easily and sounded throaty with its Thailand-made reverse cone mufflers. All seemed well until I took it out for an extended run around the neighborhood. As I throttled it up under full-power the engine note began sounding scattered and it felt like it was going lean in the mid-range. When I added some choke to the engine at speed, it picked up momentarily so I felt I was on the right track.

Back at home, I discovered a poorly repaired float on the right carburetor and a bit of an oil leak at the tach drive seal. A new float was fitted along with a new tach drive seal and the testing resumed. The more it was driven the worse it ran, choke or no choke. I fitted up some slightly larger main jets to the carburetors, which seemed to help in the first few minutes of riding, but then the bike went lame and wanted to run on just one cylinder.

Limping back to the house, the carbs were checked and the right side float bowl was nearly empty while the left side was at about the normal level. The petcock for the alloy tank only has one outlet, which tees into two fuel lines, one for each carburetor. It didn’t make sense that only one carb was getting fuel when the right side bowl was removed and the petcock turned ON, gasoline ran out freely when the float was in the down position. The float valve was a replacement and found to be slightly longer in the threaded section than the original. The float levels were carefully checked again, but that problem persisted somewhat until I refilled the tank again, then it seemed to have cured itself of that symptom.

What hadn’t improved was the poor running after a few minutes of operation. Chasing “fuel problems” for another hour lead to continuous dead-ends; nothing else of note was to be found in that system that could be causing the problems. After too much electric starting sessions, the battery finally gave up, dropping from 12+volts down to 7 or so. The battery was charged overnight and replaced back in the bike the following day, but even though it had full power, the engine continued to sputter and fail after a few minutes of riding.

Further checking of all the basics revealed that the right cylinder had fuel, spark, compression and air to the cylinder but it was not running on that side at all! A spark check revealed a somewhat thread and uneven spark, compared to the opposite side plug. As a last desperation effort, I swapped the plug wires from side to side and suddenly the opposite side cylinder went dead and the previously dead cylinder woke up!

With the fuel tank and seat removed, the shiny black coil was accessible for testing. At first I blamed the condenser as the points were arcing more than normal. Changing the condenser did nothing for the problem, so onto the coil for the final test and therein lay the problem…

Honda 12v coils which are used with points and condenser ignitions have about 4.5 ohm readings on the coil primary windings. This shiny aftermarket piece read out at 1.5 ohms! Coils with these readings are generally used in conjunction with electronic ignition systems, not with points and condensers. The low impedance of the coil caused it to overheat after a few minutes of running, which then compromised the secondary output. These are double-ended coils, used on either 360 degree crankshaft twins or on two of the four cylinders of a Honda four of that era.

A trip to the local salvage yard eventually yielded a suitable 12v coil, with a 5 ohm readout on the primary side. With a few wiring modifications, the coil was installed and the engine fired up. It instantly sounded better, heated up both exhaust pipes immediately and took throttle with a crisp exhaust note exiting the little chromed exhaust mufflers. Success at last! 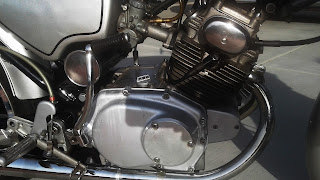 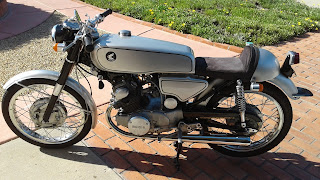 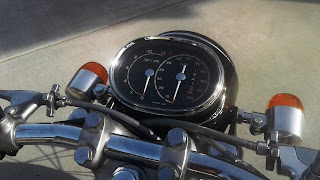 Looking back, you can see that this must have been one of the reasons why the bike was put on the market. It never could have run properly with the coil that was installed during the bike build. With all the good work that was done to the bike in the past, just this one poorly-chosen part pretty much ruined the CR93 Replica party until now. Now it runs as good as it looks!
Posted by MrHonda (Bill Silver) at 10:17 PM