Time flies, whether you are having fun or not…

My apologies for failing to update this blog recently. I have had quite a lot going on wrangling my 1997 Dream 50 street bike and the Rickman CR750 project bike, of late. In addition there are the transient repair jobs that come in and out of the shop that tax my patience and shop space at times, too.

The little Dream 50 street bike arrived a few months ago, packed with a built from scratch 89cc race motor, featuring a dry clutch conversion, race head and cams, HRC crankshaft and 5 speed transmission. The head was ported and a monster 26mm Keihin CR carburetor adapted to the cylinder head. The engine was built with a new set of cases and all fasteners, which caused a problem with registering the bike in CA. California requires engine numbers for the titles and the new engine had none. 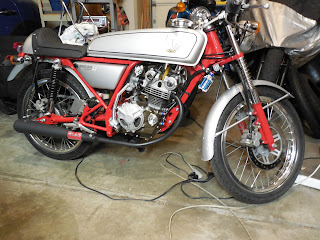 The bike did come with the original 5.5 horsepower stock engine, which was restricted by various methods. The cylinder head had a small 16mm port leading to undersized valves. The carburetor was a 16mm Keihin, tied to the stock air box. Honda’s CDI ignition system was married to a transmission switch that sensed when the bike was in 4th or 5th gear. The spark timing was limited in the top two gears to prevent the bike from exceeding 36mph (60kph) speed limit which is imposed upon 50cc motorcycles in Japan. Additionally, the front drive sprocket has only 12 teeth, which is the same as a Z50 mini-trail model. A little digging around on eBay turned up 13t and 14t options, however.
It is sad that a bike with such flashy good looks and disc brakes on both wheels is so restricted, but of course there are ways around those issues, which have been shared on the internet over the past 20 years. One of the gear indicator leads had been rewired with small little resistors between the wires to over-ride the speed limiter functions in 4th and 5th gears.

The stock cams top out the power output at about 10,500 rpms, despite a 13,500 rpm redline on the tachometer. An XR75 20mm carburetor was acquired from an eBay seller, which is a bolt-on for this bike. Jetting wound up in the #85 range vs. #75 for the stock 16mm carburetor. With all else basically in a stock configuration, the bike will tach out to 13k in 4th gear burying the speedometer needle to approximately 60 mph on a long downhill run with a 14t front sprocket.

When the stock engine was reinstalled to get the registration accomplished, the 89cc big bore kit was installed on the engine, using stock cams and the 20mm carburetor. While displacement increases are always helpful on small-bore engines like this, the compression ratio was 11.6:1 and kicking it over was quite a chore, given that the kickstarter system was designed for a 50cc piston at 10:1 compression. Eventually, the bike was reassembled back to stock 50cc size, still keeping the larger carb in place. So far the engine has been out of the bike three times! 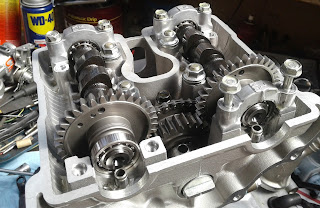 Getting a JDM Honda motorcycle registered in CA isn’t always easy, however the combination of having an Indiana title and the fact that the bike was less than 49cc allowed an over-ride in the CA registration system and a fresh CA title and license plate were issued to me for the little tiddler.

The bike was offered up as a package: stock bike along with the race motor and a lot of rare spares on eBay. The auction page count was nearly 2,000 with over 100 watchers, but failed to rise above $6700 at the end. After that, just the race motor and other racing parts were offered as a separate package, which drew several hundred page hits and over a dozen watchers, but no bids at the end. 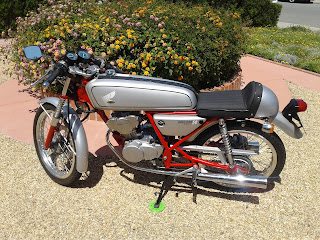 The bike may wind up in a trade situation for a 1964 CB92 Benly Super Sport deal soon, but that hasn’t been finalized. As beautiful as the little Dream 50 is, its overall usefulness is limited for the type of riding that I hoped to be able to use it for, locally. Perhaps my expectations were overly optimistic for a 50cc bike that I outweigh by 10 pounds. I have fond memories of owning a 1970 SS50 which was brought in from Japan when I was in the USAF. That bike was always capable of 60mph in dead stock form. It is funny that with the passing of time and the improvements in technology haven’t yielded a faster machine than that little 2-valve horizontal single in the SS50, dating back 45 years.