Honda’s NT650 Hawk GT model was introduced to the US market in 1988. Available in a nice metallic Blue or Silver colors, they looked the part of a great “café racer” style machine, fitted with a 650cc version of the earlier VT500 V-twin powerplant. Added “coolness” features were disc brakes on both wheels, an alloy twin-spar frame and a single-sided swing arm. Weighing in at just over 400 lbs, the bike was a secure handler in a size that fit many riders with a responsive but not overwhelming drive train.

I have owned several of these models over the years, including a very nice red 1990 bike back in 2012. The red bike ran well, but started to overheat due to a failed thermo fan switch, which is a somewhat common problem with these machines. I installed a toggle switch temporarily to control the fan function myself until a new fan switch was secured from Honda. Once that problem was solved, the bike ran well and gathered more than a few miles on SoCal highways during a warm summer.

It is difficult to find really nice Hawk 650s, as many were modified with aftermarket exhaust systems, CBR600 front ends and a host of other “racing” mods to help boost the horsepower to better match the handling of the chassis. I saw a nice original red bike last year, belonging to a long-time friend, but the bike had been off the road for several years and would need a thorough refreshing. His asking price was $4500, as-is, which is kind of top of the market, but it did feature a nice custom seat and a few other upgrades. Ironically, the bike was just posted for sale on eBay auctions with a starting price of $3800, but it failed to gain a bid after a week on the site. It has been relisted at $3200 now.
I wasn’t actively seeking another one, but a recent Craigslist posting popped up late one night that offered a 1988 bike with 1,000 miles for $1,000. The seller was moving soon, had not listed any photos because the bike was buried deep inside his 2 car garage and hadn’t been run in almost 20 years. 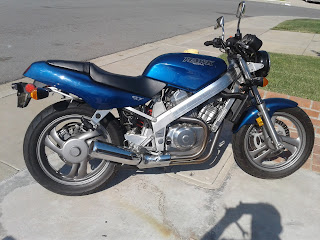 I sent a quick message to the seller, who contacted me right away. I spoke with him to get a better picture of what he was offering and guessed that it would probably take about $1,000 worth of work and parts to bring the bike current in the DMV system and completely refresh the whole fuel system, cooling system and add new tires. He set an appointment for me the following day, which I kept promptly. It took both of us to extract the bike from his packed garage. I had brought a portable air compressor to refill the tires, which helped the rolling resistance, but it was clear that the brakes were dragging as well, when the bike was pushed across the driveway.

Apart from a missing tool kit the bike was 100% original. Unfortunately, he had attempted to get the bike running about 10 years ago and discovered that the fuel tank was full of foul-smelling old gas and a good bit of rust inside. He poured some Kreem tank liner inside the tank, probably on top of the old rust and now the liner was peeling off in big chunks. Having been stored deeply inside the garage, it was untouched by damaging sunlight and ozone exposure, so all the paintwork, instruments and controls were nearly perfect.

I was prepared to pay his $1000 for the bike on the spot, as-is, but then he said that “someone from San Clemente had called and offered $1200 for the bike,” sight-unseen. Sure enough, about 10 minutes after I had arrived a young man showed up in a big Chevy PU all excited about seeing the bike. Apparently he already had 2-3 of them, but was looking forward to owning an original one with super low miles. The actual miles on the odometer was 602! Suddenly, it became a bidding war and I eventually prevailed at $1700. The young man headed back to San Clemente and I had to make a quick trip to the bank to pay the extra $700 for the bike.
I was considering how to get the bike into the back of the Tacoma, even using my arched ATV ramp, as the bike was somewhat reluctant to roll very far. Fortunately the owner had a crew of repairman arrive to do some exterior repairs on the house, so I enlisted a couple of them to give the bike a big PUSH and in it went.

\On the way home, I stopped by the local Honda dealership and ordered up $300 worth of parts to use for the fuel and cooling system updates. The fuel tank was going to be the biggest challenge and eventually I spent more than four hours using phosphoric acid, acetone and Evapo-rust products to cleanse the badly corroded tank and rid it of the decaying Kreem coating. The fuel opening is fairly wide, once the gas cap and mounting are removed. Using penlights and a long “grabber” tool, I slowly extracted gobs of loose Kreem coating that was clinging to the bottom of the tank and the various internal venting tubes and baffles inside. The acetone helped to dissolve the Kreem coating eventually and 2 gallons of $25 Evapo-rust dissolved the remaining rusted surfaces. Caswell 2-part epoxy coating was ordered up to seal up the newly cleaned surfaces to prevent any future corrosion issues. 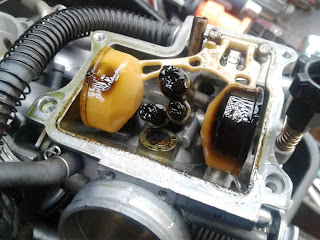 New intake manifolds were ordered and carb float bowl gaskets bought from eBay sellers. The carbs had some very dark and gooey black residues, which were dissolved with degreaser, then the parts went for a bath in my ultrasonic parts cleaner. The stock 135/132 jets were bumped up to 140/135 and the needles raised with tiny shims beneath the needle heads. Hopefully, this enrichment will be sufficient to fuel the engine properly, running on the pump gasoline that we have here in CA laced with 10% alcohol.

The front double piston brake caliper was removed and both pistons pushed out using the original master cylinder for hydraulic pressure. The pistons were gummy and the seal rings were pushing up against the pistons due to 30 years of corrosion and brake fluid degradation. The single-piston rear brake caliper got the same treatment and proper brake functions returned to both wheels.

The cooling system was drained revealing bright green colored coolant and little in the way of corrosion or degradation. The thermostat was removed and inspected. It appeared to be in great shape, so was re-installed. With the carbs off and the cooling system apart, there was sufficient access to the valve train for a valve lash adjustment and inspection of the cams. The valve covers came off easily and everything inside was sparkling clean. The valves needed very minor adjustments and the cams and rockers were oiled up to prevent a dry start for the top end.

A fresh battery was dropped in and all the fluids checked and topped off. The bike fired up quickly off of a remote fuel tank bottle and the engine allowed to run while coolant was observed to warm up and circulate, indicating proper thermostat function.  The engine poured blue smoke out the muffler for about 5 minutes, which diminished slowly down to nothing a few moments later.

With a fully-restored fuel tank and new petcock installed, it was time to button it all up and take it for a ride. While warming up, the bike was pointed out of the way of solid objects in case the clutch had become stuck after sitting for over 10 years. Surprisingly, there was a normal little clunk sound and the bike stood still while in 1st gear as if there was no issue with the clutch whatsoever.

The first test run was just around the block, followed by another 6 block run while the coolant temperature was monitored. The gauge stayed well into the first 1/3rd range and the bike was running happily along with no apparent distress or leaks. A quick return to home base revealed a loose top radiator mounting bolt with the acorn nut still laying atop the radiator core. Apart from that oversight, the bike seemed to be completely normal, as you might expect for one with just 600 original miles on the odometer.

The bike was revealed to a surprised group of my Sunday breakfast riding buddies.  The breakfast stop suggestion was Potrero, CA which was about 29 miles from our starting spot in Jamul, CA. Bearing in mind that I was running on the bike’s original tires, I rode at a brisk but not neck-breaking pace and the bike rode normally and had decent grip in the corners. The brakes finished self-bleeding the last few air bubbles out of the lines as the ride continued and a continuous smile was painted across my face for the entire ride. The total miles covered, at the end of the day were about 102 and the bike took about 2.5 gallons to top off the tank. These bikes do not have a great fuel range with only 3.2 gallon capacity. According to internet sites, the gas mileage is somewhere in the 45mpg range.