To Advance or to Over-advance, that is the question…

Regarding those pesky and troublesome camsprockets on the 250-305 Honda twins, I unearthed a previously published story in the old Examiner.com site, which has since dissolved and disappeared:

The recent following “tech message” exchange between my UK vintage Honda friend, Dennis Murfin and I had been covering the various aspects of the function and dysfunction of the integrated camsprocket/spark advancer system used on the 250-305cc Honda twins, built from 1960-67.

Dennis had restored a Honda 305c Scrambler (rare in the UK) some years back and has ridden it about 1,000 miles so far. Recent messages to me concerned his “observation” that the engine was excessively “hot,” even though it ran well and hadn’t seized its pistons yet. Dennis owns a stable of fine restored bikes, including some racing versions and we picked up the message exchange here, regarding his discovery of a substantially over-advanced spark timing setting, which contributed to the “hot” experience after a ride:

“I realized then, up until my 'recent' CL experience, just how long it had been since I built a standard engine with stock ignition set up.  That said I went to a lot of trouble with the CL and there is next to no slack anywhere in the points drive, so good that rocking the crank only a degree or so either way will open and close the points cleanly, a pretty good indication that everything is snug and tight.

This morning I carefully set the timing correctly at full advance with a strobe light and both cylinders were giving static timing at approx. 5 degrees After TDC rather than 5 degrees Before TDC, interestingly, the points base plate was now almost exactly in the central position at the midpoint of the adjuster slot, which it wasn't before I started!

I realized that somehow, the advance retard unit was producing substantially more advance than its designers intended, so clearly more research was needed. There is a heap of stuff on the 305.com forum about this, mostly a dialogue between Ed Moore, who swears by static timing and Tim Miller who insists that using a strobe light is the way to go. Both were trying to explain it to a guy who clearly doesn't understand the fundamentals.

No definitive answer there then, although I agree with yourself and Tim that the fully-advanced timing must take priority over static or low speed timing. Both Tim and you mention rubber tips on the advancer arms, which I couldn't really grasp, Tim mentions that he always renews these but I can't imagine how?

I decided than that I needed to take a really good look inside an advancer to see how it goes together and how it should work when built as Honda intended. As usual the answer was found close to home in a drawer full of old cam sprockets, some already dismantled. Close examination of some of the bob weights showed that yes, they do have rubber tips, at least a rubber cushion on the limit pegs but only on the 'inner' faces which affect the static or fully retarded position.

At this point I suppose that I was lucky in finding two pairs of bob-weights one pair intact and one with the rubber damper part almost completely missing - see attached image. This was really the 'lightbulb' moment and all becomes clear, as follows: 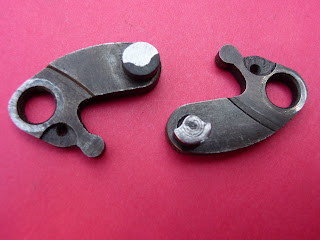 The rubber missing from the inside face of the 'stop peg' affects the 'home' or static position of the advancer; effectively the rubber stop that the springs should pull the weights against is missing, so the springs need to pull the weights further in until the steel part of the peg makes contact with the sprocket. The springs may not be short enough to impart this extra contraction, which then gives the illusion that the springs have lost their tension which they may not have. This also explains why new OEM springs may appear to be too long and don't always take up the slack in the mechanism.

If the springs do pull the weights fully inwards they are creating a false 'at rest' position, which is actually retarded relative to what should be the correct position. Static setting of the timing will then need the base plate to be advanced to counteract the missing cushion from the stop peg, but at least the static timing can be set correctly - I hope you are still with me so far?

As the engine speed increases the weights move out, as normal, but because they are starting off from a retarded position, they now advance the timing much further before the fully advanced position is reached, this explains exactly the symptoms I have and also might explain the noisy top end when everything appeared to be in order.

With the advancer assembled it is very difficult to determine the condition of these rubber tips or even to see if they are present, missing or something in between; an advancer unit which appears to be good in every other respect could be missing the rubber tips. At this point I must confess that I have reclaimed apparently 'stretched' springs by rolling the hooks on the end of the springs a little tighter and trimming off a millimeter or so of the spring. This was when NOS replacement springs appeared to be too long!

Of course, until I pull down my CL motor all this is conjecture but I'm pretty confident of what I'm going to find when I do.  Hopefully I can avoid the same problem with my CB77 if I can find an advancer with the rubber tips intact.  I'm intrigued by Tim Miller's comments about renewing these tips, I might drop him a note to see if he can recondition a couple of units for me, one for the CB and another to put into the CL, I'm confident that this will bring everything back to spec as Mr. Honda intended.

Attached picture show 'good' and 'bad' bob-weights one with rubber tip intact, the other with the tip missing altogether.

Dennis’ write-up here pretty much sums up the ignition timing challenges that all engine builder/tuners face, when working on this series of engines. Checking the condition and presence of the rubber stopper ends on the pegs of the spark advancer will reveal whether or not you are going to have ignition timing difficulties and the resultant associated problems of off-spec spark timing. Ensuring that the weights are brought back to “home” position by tightening the spring ends or replacing the springs altogether will help keep the tuning process simple and more straightforward than trying to overcome a problem that can’t be fixed by fudging the ignition timing and carburetor idle speed/mixture settings.

After our message exchanges, a quick check of the spare camsprockets in my spares bins showed variations in how they were manufactured and how they functioned with modified springs. It certainly will pay dividends be even more diligent about selecting replacement camsprockets in the future.

For those of you who have been mystified about how the spark timing can go so far awry, even when it has been carefully set statically, the probable cause is addressed here, in the above details.

That’s not quite the end of the story, however. Many restorers and rebuilders may not realize that there are two distinct types of camsprocket units with different weights, springs and advance curves. Honda 250-305 Dream engines have a quicker spark advance curve, which begins at 1,000 rpms vs. 1200 rpms for the CB/CL engines. Total spark advance for the Dreams occurs at 2500 rpms vs. 3800 rpms for Scrambler and Super Hawks. As shown in the included photo, the Dream spark advance weights are longer and the return springs are more delicate with less tension applied. 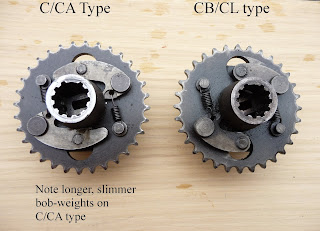 Not only that, but there are at least 3 different spline patterns for the cams and sprockets to interface with. You CANNOT interchange camsprockets and camshafts which have non-matching splines, so if you are shopping online, be sure that the ID and OD and type of spline pattern will all match up in the end.

Bill “MrHonda” Silver
With acknowledgments to Mr. Dennis Murfin for his research and sharing the results of that work.