The Trials of the Trail 90

It should have been pretty straightforward, I thought. I was tasked with reassembling a “project” bike that had been passed along from one friend to another for not much money, a few years ago. The engine was brought to me for a top-end and to un-stick the high-low transfer function of the transmission.

The engine looked like it had been underwater, as the head casting was deeply pockmarked with corrosion and the cylinder bore was rusty. The cylinder was sent out to DRATV for a big bore kit and was reassembled without apparent difficulties. The cylinder head was treated to new valves (aftermarket) but the valve seats seemed to defy being cut in properly. I have both OEM Honda valve set cutters and a partial other seat cutting kit to use, but it seemed that the whole valve guide was offset somehow and the valves leaked every time I reassembled the head.

Fast forward a couple of years and both the engine and chassis returned to me for marrying back together again. There are a lot of little details that seem to take forever to accomplish, but finally it arose from the rusted state towards looking like an actual motorcycle. All the cables were replaced and an aftermarket headlight shell from Thailand was installed with rather poor results as the reproduction part dimensions didn’t fit the headlight rim properly.

Once it was assembled, it failed to start up, despite having most of the ingredients to run. Rechecking the compression revealed only 90 psi, which is marginal for most engines to run at all. The head was removed again and another hour or so devoted to cutting the seats to make a correct seal. After much work, the head was reinstalled and the compression readings came up to 120 psi. It was still difficult to start, but a little bump start down the driveway finally lit it off. Initially, it sounded okay but oil started to leak between the head and cylinder. There is a small rubber sleeve around the only cylinder dowel that feeds oil to the camshaft and rockers, plus a complicated seal that wraps around the camchain tunnel opening.

As a backup, a good used 1969 CT90 head was purchased from eBay seller, but contrary to the seller’s claims, the head was from a CT110, which has completely different head gasket arrangements, plus all of the valve train components were different from the original CT90 types, so that was a dead-end effort. 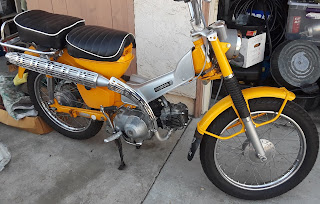 Researching the engine parts, I noticed that there were two versions of cylinder heads listed for the 1969 CT90, plus apparently some changes to the cylinder, itself, in later editions. I recall seeing the returned cylinder not being the same as the one I shipped out to DRATV, but assumed that they were mostly the same and that we were shipped a cylinder that was already bored and ready to go, instead of getting our original cylinder machined to fit.

When disassembled, nothing appeared to be out of the ordinary or misaligned, but it leaked immediately once again after reassembly. I had parts of another gasket kit with different sealing parts, so I tried those instead, but with the same results. After several rounds of assembly-leak-disassembly went over and over, suddenly the piston was making contact with the edges of the combustion chamber. Marking the combustion chamber numerous times revealed contact up around the intake valve area, just inside the copper head gasket. After a half dozen attempts at carving away material around the combustion chamber, it finally turned over without piston contact.

I contacted DRATV to see if they had problems with piston contact and they said that there were issues, so they include a thicker copper head gasket to move the head away from the piston! They sent one to me at no charge, which was somewhat helpful, but I continued to have the oil leak problems, apparently around the stud knock pin seal. Ron added a bit more complication to the mix when he ordered a set of heavy-duty valve springs and a mild camshaft for the engine, as well. The parts came in with no instructions, as to different valve clearances and if the carb jetting needed changing. I just added an extra thousandth of an inch to the valve clearances.

I ordered an OEM cavity gasket which has an embedded metal base, so it doesn’t squeeze into the camchain tunnel. Finally, I put two sleeve gasket packings on a new knock pin and squeezed it all together. Success, at long last! I verified the ignition timing, which seemed to be suddenly retarded over what it was set to initially and the engine became easier to start and had a much improved idle performance.

There was just one small irritation after another, until I was about to put a torch to it, but resisted the temptation. There’s always a reason for these kinds of problems, but sometimes the answer is not easily discovered, even on such a rudimentary and simple one-cylinder engine like this.