In my 57 years of wrangling bikes and cars, I have estimated owning about 400 vehicles during that time, but in only a few cases have I ever bought one back from the owner that I sold the car/bike to in the past.

In recent years, there was the return of a 1980 CB250RS, which I had bought new in the UK and shipped to California. I got it licensed and rode it for a few thousand miles, then sold it when I bought a new 1983 Honda 750 Interceptor. In 2014 the bike was listed locally for sale and I bought it back. A few years later, a “cafe” 1962 CB77 with Type 2 engine came back to me after the owner passed away and his wife was selling off numerous bikes, including that one. Both were eventually resold again as I continued to roll bikes in and out of my life.

Recently, I was contacted to revive (again) a 1963 CB77 that I had built from bits back in 2013. It was originally sold to a young woman who loved the look but didn’t have a great deal of motorcycle riding experience, much less keeping up on the maintenance. The bike did come back a few times for some various issues initially, then it suffered through a couple of minor crashes during its life with her. A move into a 3-story apartment with no garage necessitated the sale of the bike to a good female friend who rode scooters and various small-bore bikes. That owner rode the bike all the way to Joshua Tree Monument with a large group of women motorcyclists which covered over 300 miles of riding, mostly on highways at speed. The trip was successful, but oil leaks and other issues surfaced, so the bike was parked for a year or so. I gathered it up, brought it home, and revived it once again. The bike was treated to a set of prototype Hagon shocks that I had helped the factory develop for these bikes, so the rear suspension was much improved over the stock shocks.

Again, the bike was seldom used and then taken off the road in 2017, where it sat in a garage slowly degrading away. I had built the bike with new spokes on the powder-coated rims, but now the spokes had become rusty and beyond scrubbing up again. The tachometer cable oil leak was an ongoing issue and the battery had died over time. The fuel in the tank was left to leak out over the engine, due to a leaky petcock connection to the fuel tank. The rear tire was down to the wear bars and the bike was looking pretty sad when I gathered it up again, now 4 years later.

The fuel system was dismantled, cleaned and reassembled. I had a spare can of Caswell fuel tank sealer, so coated the tank inside to seal up an old pinhole in the saddle of the tank that I had treated with POR15 some years ago. A new AGM battery was ordered and installed. The battery that had been in the bike had about 30% left of battery fluids, so was beyond saving anyway. A spare Heidenau 3.00x18” rear tire that fit the bike was a leftover from the last CB77 recently sold, so that was spooned onto the rear rim. A little research came up with a small seal that fit inside the end of the tachometer cable and seems to have solved the persistent oil leak there. The seal cost $15, but did remedy the issue, so far.

First test rides were encouraging, as I used the bike for some local post office runs to drop off small eBay sales items. The return trips involve riding up a long uphill road which unveiled a slipping clutch issue. Right after that, the dreaded clutch pushrod seal popped out on a PO run and left a pool of oil on the ground in the parking lot and had also oiled up the entire rear end of the bike, including the new tire which was just mounted. I nursed the bike home quickly and parked it over cardboard strips to catch the oil drops and runs that were shedding off the chassis.

After removal of the right-side muffler and kickstarter cover, the errant oil seal issue was confirmed and the latest fix is to order a neat seal retainer that keeps the oil seal in the end of the transmission shaft and anchors to the countershaft sprocket bolts. 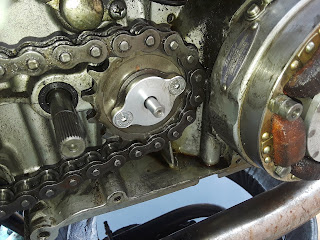 I drained the rest of the oil from the engine, then pulled the clutch cover off to check the condition of the clutch components. The 1963 bikes came with a 6 plate clutch, but I had revised it with most of a later 5 plate clutch pack, including the little retainer wires. The friction plates were still to stock thicknesses but were glazed and hardened with oil residues. The steel plates were in decent shape but were only 1.5mm whereas the later clutches have 2mm steel plates. I ordered new friction plates from an online eBay seller and found a set of 6 steel plates that were in good used condition and combined all the parts into a new clutch pack. The combination changed the stack height a little bit, but the clutch adjuster needed only a small adjustment to create the proper setup for free-play in the system. Once it was all wrapped up the clutch worked flawlessly and the transmission shifted better than most that I could recall in the past.

I worked out a deal with the ladies involved to take over custody of the bike permanently, but gave them both a key so they could come and take it for a ride if they were so inclined in the future. I went ahead and bought an aftermarket rear luggage rack from a Thai eBay seller and waited for it while I finished dialing in the bike’s carburetors and attending to a few other small oil weeps.

The luggage rack came quite quickly, but once out of the box it appeared to have been either malformed when manufactured or somehow got squeezed since then, as the whole rack was a bit twisted, the ends that go to the shocks were torqued over and the two ears that go under the seat mounts on the frame were at least 1” too tight together. I took photos of the damage and sent them back to the seller who was not wholly cooperative. First, he wanted to know if I was actually putting the rack on a CB77 and wanted photos to show that I really knew what a CB77 was and that the bike was correct for his rack. He seemed to disregard all the detailed photos I sent to show how badly out of square it was, but he continued to argue that he had never had problems with the product and that he still wasn’t sure that I was trying to put it on the correct model. Finally, I surmised that I could perhaps tweak the rack back to normal again using a bottle jack. I placed it inside the rack’s structure and wedged it apart a bit at a time until I got the width correct and was able to bolt it back into the chassis correctly. I did send him a photo of one of my books, to assure him that I really did understand what a CB77 was and that I was really trying to mount his damaged part on the correct machine. 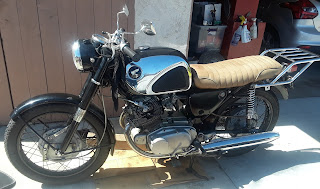 The bike still has the original points/condenser ignition, but I had fitted it with a late Honda replacement silicon diode rectifier that had come my way, back then. So, the charging system is working fine and the new AGM battery kicks the motor over promptly every time I hit the button.

The headlight rim had a pavement mark from the earlier tipover event, so I sought to find a new or good used one. I was able to secure a new one from the UK at a cost of about $80. In the process of searching I discovered that enough parts were available to build up one of the domestic/Euro headlight assemblies which use a replaceable headlight bulb inside the reflector. A rim, reflector, parking light pigtail and socket were all acquired, along with the correct bulb base from an Ebay seller. What I lacked was a retainer wire, which is made of spring steel and formed to hold the base into the back of the reflector. The part is NLA it seems, so a piece of thick stainless steel safety wire is doing the job now. I can’t use the parking light function until I turn up a 3-position headlight switch, which is used to select just that light only.

The bike is now registered, insured and fully-functional now for its new duties as my post office runner and other short-trip bike. It still needs to have the wheels re-spoked and a few more shiny bits replaced, but it runs well, shifts effortlessly and is keeping all of its oil inside the engine cases. In the past I have had a small scooter to make the eBay post office runs, but I much prefer the little black CB77 now for that purpose. It makes my heart happy to see it waiting for me in the parking lot and often draws comments from knowledgeable bystanders. Its next big adventure will be to go on the Distinguished Gentleman’s Ride, which is the day before my birthday this year of 2021.