Favor for a friend…

Last November, I received an email message from the wife of a former co-worker when we worked together at a Honda motorcycle dealership back in the 1980s. It started out like this:

Hi Bill,
I am hoping you are the Bill that knew XXXXXX If you remember him, please email me back. I have some info to share. I also have a M/C to ask you about.
Thank you,

Well, I’m probably not the only one who has received similar messages from the spouses of friends, family and co-workers who have passed away in recent years. In a following conversation, I discussed my relationship with her husband in the past and that we had lost touch for some 40 years, but I always thought very highly of him. Her dilemma was that he had left two bikes behind; a 1975 CB750F Super Sport and a 1986 Honda CB700SC. The CB750 was a full tear-down and restoration with a few modified touches done back in the 1980s. The CB700SC was a “Covid project” bike that had been sitting for awhile. It’s still a mystery as how she knew my name and how to reach me, but we called it divine intervention and left it at that.

Supposedly the bikes had been run regularly and ridden enough to keep everything functional, but when I got to them in early Jan 2022, they were not ready to ride or sell. The CB750 was in her garage and when I started it up, the bike coughed and barely ran with a full choke. Pushing it across the garage floor felt very heavy, denoting a lack of air in the tires. We rounded up an air compressor and pumped the tires up from 10 psi up to the mid-30s, which gave the bike a much lighter feel right away. It still really didn’t run much better after 10 minutes of idling and a brief run around the neighborhood, but I could see that an enormous amount of work and care had gone into the rebuild of the bike, so it was just a matter of a carb clean and tune-up to get it going again.

Rather than haul both bikes out, plus numerous boxes of spare parts, we settled on me just taking the CB750 home first along with its box of extras and see what could be done with it to make it marketable in the near future. It was an hour and a half drive up to the Inland Empire where they had purchased a home in a golf resort and I mused about what I had gotten myself into in this quest to help a friend’s family with finding a good home for the bike.

When we first talked at the end of 2021, their daughters were dead set against their mom making any sudden decisions about disposition of the bikes because they knew how much they meant to their dad. I backed off and told her that I was available whenever they were ready to make some changes in the situation. Two months later, the dust had settled, grief had passed somewhat and they agreed to start letting go of the bikes.

CB750K series bikes (4 muffler versions) have risen in prices greatly in the past few years. For the CB750 F Super Sports, the market hasn’t been so enthusiastic although the basic motorcycles are both based upon the same engine design. The 1975 models were the first generations of the Super Sport line-up with the 4into1 exhaust systems, which included the CB400F and CB550F Super Sports editions. The first generation 750s still had wire spoke wheels, but featured a rear disc brake and a more racy style than the K model bikes. The 1975-76 bikes were pretty much the same, but the model got a major revamp for the last two years (1977-78) of the SOHC 750 Four which came with Comstar wheels, blacked-out motor finish and more aggressive cams, canted valves and higher compression engines.

With some assistance on both the loading and unloading ends of the trip, I was able to get the big 750 down to earth from my Tacoma’s bed, ready for some evaluation of the running problems. I was able to access one of the pilot jets in a carburetor and it was plugged up, so I had to assume that the rest of the carbs would need attention. Fortunately, removal of the air box and carbs is a lot easier than the later DOHC models, so the carbs were out and on the workbench pretty quickly.

Popping the bowls off revealed little in the way of varnish or major contamination, apart from the plugged idle jets. What was more evident was the amount of old dried up varnish deposits on the bottoms of the carb throats both on the inlet and outlet sides of the bodies. A little Dremel sized brass tipped brush in a drill motor swept away the varnish deposits and a quick squirt of brake cleaner washed away the evidence for the most part.

The jets were slightly over-sized to compensate for the Kerker branded 4into1 exhaust system, which is about 20 pounds lighter than the OEM system that had a large cigar-shaped muffler attached at the back. Aftermarket systems generally need a bit of enrichening to help keep the air/fuel ratios in balance after some of the back-pressure was released. I rechecked the float levels and buttoned the carb rack back up for re-installation on the bike. Running a separate remote fuel tank to feed the carbs, I noticed an improvement in starting and running as it warmed up, but there was still some irregularities in the sound of the engine’s exhaust note.

Checking the spark timing with a dynamic timing light, I noticed that the 1-4 cylinders were working well but the 2-3 coils were firing erratically. Misfiring problems like this are caused by a number of factors including dirty point contact faces, weak condensers, loose coil wire connections on the primary side and problems with the spark plug caps or the coils themselves.

Removing all the spark plugs gave me a chance to check the compression readings, look at the spark plugs and check the spark plug caps for resistance values out of the 5k ohm range. When I unscrewed the spark plug caps, the one for the number three cylinder was kind of glued onto the wire. As I pulled and twisted it finally came off, but there was a big buildup of burned rubber and plastic from an arcing plug wire that was not making good contact with the inside of the plug cap. That spark plug was dark and fuel-fouling, but I also noticed that that plug was a D7ES instead of the correct D8ES series. I can only guess that the plug was fouling and replaced by a hotter one to lessen the effect. A fresh set of correct NGK plugs, all plug caps testing in around 5k ohms and tightly connected to the plug wires which were cut back a little to access new wire made all the difference in the way the bike idled and took throttle. The timing light stayed steady under increased rpms, so that was the whole issue with the engine performance… a poorly connected plug cap.

Out for a Sunday ride…

Once I had confidence in the bike, after a couple of local test rides, I decided to give it a full test on Sunday with my Jamuligan friends to run up to the mountains for our breakfast run. The bike ran fine and I even ran it up to around 90 mph indicated with no ill-effects. The only problem for the ride was when I was stopping in my driveway and put the side-stand down. Or I thought I had put it down.. As I started to dismount from the bike I realized that the side-stand hadn’t come all the way forward and was folding back up as the bike tipped over towards the ground. My reactions were to plant my left foot firmly on the ground and lift the bike back upwards to reset the stand again. Something in my left leg went POP and I got all light-headed like I was going into shock! I was able to deploy the stand and set the bike down on it properly, but then had to just stand there for a couple of minutes while my body could recover enough to allow me to move away from the bike and remove my helmet and gloves. I limped back into the house and collapsed in a living room chair. The last time something went POP in my body, I had severely sprained my right ankle and it took me out for a couple of weeks.

Fortunately, the damage wasn’t as bad as the one in the past but I iced it and have been treating it with whatever I had available to reduce swelling and pain. I was able to walk around with some pain present, but as the leg warmed up and the muscles lengthened again, I could manage okay, but carefully. I’m sure my friend would have appreciated the fact that I saved the bike from a rollover and certain damage from hitting the concrete.

So, that was the last big ride experience for me and the CB750F. It was listed on FB marketplace, Craigslist and eBay for sale hopefully to find an appreciative new owner who understands the work that went into rebuilding the bike back from scratch. If I didn’t already own a 2020 Royal Enfield 650, I would have bought it to keep for myself. It’s really a nice example of Honda’s mid-1970s efforts for the CB750 Four.

Moments like this cause us to reflect on our own mortality and wonder who will step in to take care of our parts, bikes and unfinished projects when we depart planet earth. Plan ahead if you can... 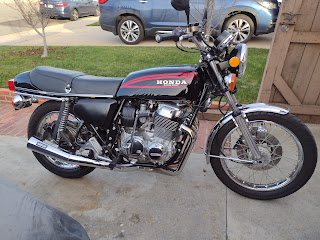