The speedometer wouldn’t lie, would it? Part 1

Well, another ailing CB77 has found its way to my door/shop; this time a fairly rare blue 1966 edition. The lead came from the vintagehondatwins.com site, when I was assisting a different person about a 305 question. This one popped up showing a speedometer reading of 2340 miles. The brief description was that it was stored in someone’s collection for over 15 years (CA license plate shows 1992 tag) and came without a title or other paperwork.

I was able to have a conversation with the current owner who had picked it up recently from a chance encounter with a man at a cars and coffee Saturday morning event. The bike has a seized engine, but initially the seller was describing a ribbed front tire that appeared to be in excellent condition, perhaps indicating that it was an original item. While the conversation continued more details came up that cast a shadow on the “originality” of the bike and the tires. The tires were from Cheng Shen, out of Taiwan, a common replacement back in the 1980-90s. The front tire size was not correct at 3.00x18 (date code 500). The rear was a 3.50x18 which causes the bike to be unsteady on the centerstand due to the increased overall circumference of the tires.

The chain guard's forward tab on the swingarm
was broken free and the chain guard was chromed at sometime in its life. The bike is a 24xxx model, so was originally equipped with the low, flat-bar handlebar setup. The bike had 1975 Oklahoma inspection stickers on the front fork, but the CA license plate was the blue version dating back into the 1970-80s era. The fork cover has some dents and there is a dent on the top of the fuel tank, plus lots of scratches all over and the usual rust buildup in the nooks and crannies of the frame. The mufflers are OEM, but the right side has some rust patches on the outside and some battery acid damage and the left side has major dents from some kind of impact.

After some negotiations, we came to an agreement, which included meeting me about half-way down from its location in Santa Clarita, which is where the last CB77 came from. It is a 340 mile round trip from San Diego, so a meetup in Anaheim was a big help even at additional cost to offset his costs and time to drag it halfway down the road.

Initial impressions were that the bike had had it’s share of use, beyond 2300 miles, given the changed tires, broken chain guard tab and after a closer inspection one of the cylinder head nuts had been replaced with a plain hex nut, so it was looking less and less like the speedometer was the original unit that came with the bike from the factory. Still, I am a sucker for a Super Hawk, so we concluded the deal and I brought it back the last 100 miles to home again.

First order of business is to remove the engine and get it on the bench for a top end teardown and inspection to see just what has happened to it in the past 20-30 years. In the meantime, I ordered another AGM Motobatt battery and a rear tire for the bike, which will be followed by a complete set of new cables, fuel tank cleanout, petcock overhaul, carb overhaul, gasket kit and seal kit and whatever else it will need to get operational again.

The engine was lowered down on my portable bike lift and then given a wash down to get the worst of the dirt and grease off of the outside of the engine casings. After a little scrub-up, the engine was hoisted up on the workbench. I always loosen the outside case screws on the cylinder head and clutch cover before I go to far into a teardown. Using the mass of the engine to hold things steady, my impact driver got a good workout loosening the screws, especially in the head where they appeared to be unmolested since the bike was assembled in 1966, which was noted on the factory wiring harness tag.

Based upon the wear on the sprockets and other chassis parts, it is doubtful that the bike only has the original miles that are showing on the speedometer. All the cables are beyond shot, the drive chain is worn out. The broken chain guard tab doesn’t usually happen at that low of mileage. As parts were removed, the crankshaft was checked for any signs of turning and to my surprise it did turn about one-quarter of a turn and then stopped dead. It would turn backwards for the quarter of a turn, but no more in either direction.

As luck would have it (for a change), the master link was almost right at the top of the cylinder head, giving me easy access to the clip. I string a piece of 22 gauge wire through the ends of the camchain to keep them from falling all the way down the engine cases. The top cover came away and revealed a nicely clean set of cams and rockers. Flipping the head over showed some normal carbon and a bit of corrosion on the valve heads, but nothing was bent, burned or broken. With the head removed, I tried the crankshaft again, but nothing had changed. The pistons looked okay on the crowns, but they would only move up and down a bit then tighten up solidly.

At first I thought that perhaps something was tying up the crankshaft sprocket and primary chain, but a look under the clutch cover didn’t reveal anything out of the ordinary except that the outer surface of the oil filter was showing signs of some kind of unusual rubbing marks. I setup my steering wheel puller which is generally used to push down a stuck piston with success in many cases. Despite the lack of obvious rust or seizure damage the right side piston refused to push down easily, fighting me every mm of the way. After an hour of wrestling with it, I was able to almost see the edge of the wrist pin bore at the bottom of the cylinder block sleeve, but it wasn’t giving up without a big fight. I left it for the night and plotted a new course of action for the next day.

Well, it took another hour of pounding and twisting the steering wheel puller in order to extract the stuck piston from the cylinders. I actually wound up getting the cylinders blocked up with a 2x4” piece of wood, then working the piston down far enough to get to the wrist pin/clip. I reached into the center of the crankcase and removed the two bolts holding the camchain guide roller/bracket which left me a clear shot at pushing the pin out using a very long screwdriver. As the cylinders were pulled up, the left side piston released lots of broken bits of piston rings.

The right side piston was still stuck in the bottom of the cylinder sleeve, but it finally popped out with a few more whacks with a hammer and a big drift punch. That piston had all of the rings solidly glued into the piston ring lands. The cylinder walls were actually fairly clean, as far as rust/corrosion goes, but there were some deep grooves in one side and some other irregularities on both sides, especially at the top of the bores. 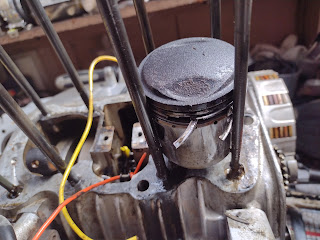 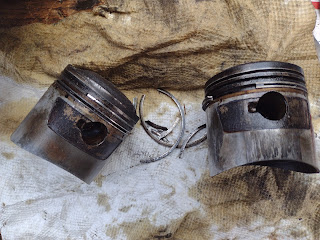 I finished tearing the rest of the engine apart, noting a burned shift fork and second gear slot. The gear dog engagement was about 10% and the gear dogs were rounded off from repeated jumping in and out of gear.

The clutch pack was a solid mass of plates and friction discs. I pried them apart but the steel plates are all very corroded from sitting pinched together for 30+ years. The clutch pushrod end was holding the steel ball in its grip as the end was an open piece of tubing instead of the normal hardened steel tip. Later comparison with a stock part, revealed that it may have been from a 160 instead of a 250-305 with the extension added to take up the shortfall.

The engine cases were covered with a clay, dirt, grease mix that would only release when scrapped off with a screwdriver or other scraping tool. I spent more than 2 hours cleaning, rinsing, cleaning, rinsing and finally getting them reasonably dirt-free. With clean cases, the reassembly can proceed.

The crankshaft locating pins were all installed and the crankshaft assembly reinstalled with all the bearing races engaged with the pins. The main shaft got a good used 2nd gear, offset gear cotters and a new seal. The countershaft was treated to a new low gear bushing, new kickstarter pawl, spring, cap to freshen things up. Obviously, this bike and engine had been driven way more than the indicated miles on the speedometer.

The oil filter was a shocker when I removed the through shaft, instead of old oil drooling out there was a pile of dry dusty, dirty particles that had filled up the filter. I have never seen anything like it, as if there was water filtering through it for awhile. There was no other signs of water contamination inside the engine, but this filter was totally unexpected to find this kind of debris trapped inside.

With the lower end buttoned up with a scarce NOS primary chain, I experimented with trying out a set of Barnett clutch plates that were in a pile of spares I went to work on the cylinder head. All the cam lobes and rocker arms seemed to be in great condition. The valves showed typical rounding on the intakes and intake seats, while the exhaust valves looked fine, but the seats seemed to be a bit uneven. Having some issues lately with oil leaks around the head gaskets, I have taken to using some GasketCinch to coat the gaskets and mating surfaces to prevent any more unnecessary engine pulls for unexpected oil leaks.

With help from my neighbor, Thomas, the engine was lifted off of the bench and onto my little bike lift, used to raise up bikes without a centerstand. I have found it useful to push CB/CA engines back into their frames, plus it makes it easier to roll the engine around from the shop to the driveway where engines wind up being installed.

With a little jiggling back and forth, the engine was reunited with the chassis and the reassembly continued. I had purchased a set of “CB77” chrome header pipes from an eBay seller in Thailand, but when they arrived I had a bad feeling that they were not made properly. A test fit confirmed that the pipes may have been made for a Dream, as they were 3” longer than the CB header pipes and the bend was so tight that the outlet end was hitting the bottom of the engine cases. The seller refunded the purchase price and said to just keep the pipes.