Coming through in the clutch… Honda 250-305 clutch history

One of the most confusing aspects of 250-305 engine repair is sorting out the numerous versions of the clutch assembly. I will attempt to demystify it here, if possible.

Honda started with a light pull, conservatively-designed 4 plate clutch used in the first generation C/CA72 250cc Dreams.  In the parts books, you will see these parts with 259 part codes, which is the code for the 250cc Dream engine series. With the somewhat higher power output of the 305cc engines, the parts were upgraded to 266 codes for the clutch pack and the primary chains. Yes, there were three different parts numbers just for the primary chains, starting with 259, then 266 and finally the 268 code part for the CB72.

The thick 5mm friction discs of the 250s, coupled with very light clutch pressure springs resulted in clutch wear and failures fairly early on in the production cycles. 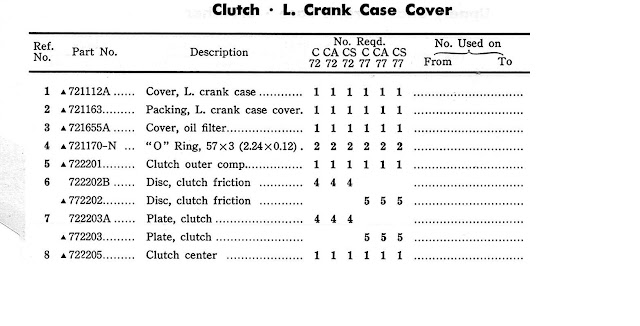 The 250s had four thick friction plates and four steel plates. The center hub had no grooves for retainer springs. Early pressure plates have been seen with small metal pegs inserted around the edges with tiny coil springs attached, which helped push the clutch assembly apart during disengagement. The 305s had five sets of thinner plates. One set of clutch springs sufficed for both versions, at first. Apparently clutch wear and failures became common, so a new set of clutch parts were designed for the Dream engine applications. Notice there are two clutch outer part numbers. The first is a solid mount rear chain sprocket style and the 010 version was the improved “cush drive” model. The inner clutch hubs came in two more types using the stopper rings, fitted into grooves machined into the clutch hub. Ring groove locations varied due to the differences in the thicknesses of clutch plate pairs which were being retained by the stopper rings.

Clutch springs were offered in 259-000, 259-010, 266-000 versions, which became progressively stronger, as necessary. Clutch centers were offered in 259-000, 259-020, 266-020 and 266-030 for 250 and 305 models, respectively. The early model clutch friction plates were molded solid fiber material. As the clutch designs progressed, the 268-020 coded friction plates were made in aluminum-backed parts with the friction material bonded to the metal backing. Friction materials varied in thicknesses depending upon the application and number of plates used. Dreams wound up with either 5mm thick, 4-plate clutch packs or the thinner 4mm 5-plate combinations. The Plate “A” (first plate on the hub) was generally 2x the thickness of the other steel plates. Steel plates come in several thicknesses, so just the right combination of parts needs to be achieved to create the best possible clutch pack build.

Many people have discovered sudden loss of clutch lever action, usually when the kickstarter covers have been removed for servicing or clutch cable replacement, due to the ball bearing dropping out of the lifter arm hole. The thickness of the ball takes up considerable amount of lateral play in the clutch release mechanism, so when it is missing it is impossible to adjust the clutch free-play using the cable adjusters or the clutch adjuster on the side of the kickstarter cover.

Scrolling down these pages to the CB72-77 clutch parts list, you will see that there was a 6 plate clutch offered, a 5-plate version using all fiber friction plates and finally the last generation 5-plate clutch using the metal-backed friction plates. Obviously, in order to accommodate a 6 plate clutch pack, all the plates needed to be thinner than the 5-plate set. The last generation CB72-77 (and CL77) used a clutch center with retainer grooves placed to allow the thicker plates to be installed and retained. The last of the steel plates had anti-warp notches stamped along the inside edges to help keep the plates flat when they became heated during aggressive operation. The Plate A is quite thick and has a beveled back edge to clear the clutch outer when installed. Late version pressure plates have angled drain holes to help evacuate trapped oil inside the clutch assembly.

There were three different clutch covers first due to a change in the shift shaft lengths, then the progression from “small hole” to “large hole” outer oil filter cover sizes. Remember to check your new parts against the old ones, when doing replacement of components.

CB72-77 clutch springs went through a series of part number changes from 268-000 for the 250s, followed by 275-000/010 for the 305s, then to the very stout 275-810 racing clutch spring. For most normal stock street applications, the 275-000 spring (equivalent to the 323-003 CB500 Four spring) works fine with stock clutch pack parts. These springs give a nice balance between light lever pull and sufficient pressure to prevent clutch slippage. Use of the later 275-810 springs will give the rider a very heavy lever pull experience, but does ensure that clutch slippage is pretty much non-existent.

When there is wear inside the clutch adjuster threads, there is a progressively lessened amount of clutch pushrod travel to disengage the clutch plates. The wear increases the amount of force needed to disengage the clutch to the point where the combination of heavy springs and worn clutch release parts can cause damage to the early version kickstarter covers. Later versions of the kickstarter covers were designed to move the clutch cable joints more forward, closer to the cover retainer screw mount.  Increased strengthening ribs were incorporated into the cover design to help prevent breakage which is especially common in the Super Hawks, which have forward-kicking kickstarter levers. 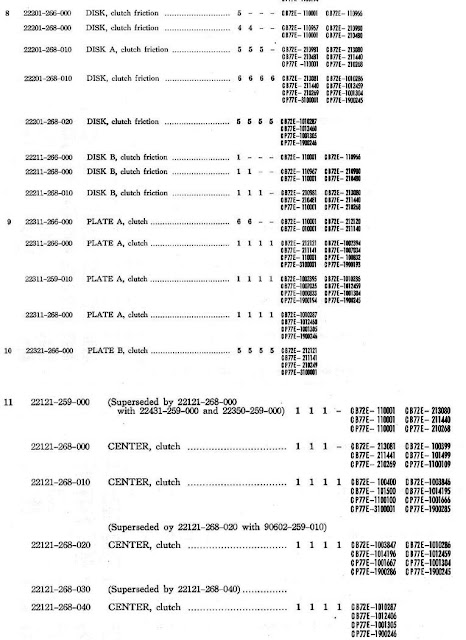 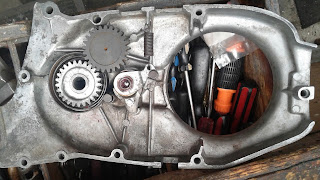 You cannot indiscriminately mix and match Honda friction and steel clutch plates and have a normal operating clutch on a 250-305. Steel and friction plates come in various thicknesses and designs.
You MUST use the clutch plate pack that matches the inner clutch hub retainer wire grooves AND use the retainer wires, as designed. These “stopper” wires are becoming extinct, so I have used picture hanger wire or very thin safety wire to use for the same function. Installation of the plain wire requires drilling an additional hole in the hub and securing both ends of the wire inside the hub where the stopper wire ends usually wind up after installation. If you leave the stopper springs out, you will have difficulty in selecting neutral when the engine is running and you are at a stop light/sign and need to release the clutch in neutral while you wait.

The best solution is to use the 1965-ish and later CB/CL77 clutch assembly, which includes the cush-drive clutch outer and the sturdy 268-020 friction plate sets. See photo below for comparisons to your clutch assembly. Remember if the clutch pack stack height is not correct, clutch engagement/disengagement issues will arise.

Using a CB/CL77 clutch is perfectly fine in a 250-305 Dream. You might play with using some of the lighter clutch springs to lighten the clutch lever pull, as strong springs are not needed for Dream applications. The Honda 425 code springs are the superseded parts for the Dream clutch springs.
Using Barnett clutch kits will not allow use of the inner hub stopper springs, so clutch release at a stop sign/signal light will be compromised. Barnett plates tend to drag when cold and the spacer plate they use to compensate for the changes in plate thicknesses will cause problems for street use. IF you are racing your bike and don’t care about street use, then going for heavy springs and heavy duty clutch plates may be the way to go, but you will have difficulty getting the transmission into neutral without the stopper springs in place.