I haven’t been very consistent in my blog postings lately, due to a number of situations that have arose over the past month…. But I’m BACK now.

Let’s see… There was the matter of the CL125A, which needed some attention for oil leaks, fresh rubber and some performance/appearance issues. The shift shaft seal was replaced, new fork boots and one fork seal were replaced, new tires/tubes installed and the muffler was welded up on the inside where a hole was rubbed through from contact with the shock absorber. A new battery was procured, of course, and the fuel system cleaned and re-jetted for modern fuels. It was too underpowered to make the hill nearby which leads to the post office, so the bike was offered up for sale and found a new home in Ventura, CA as a result of an eBay auction. The buyer had one just like it when he was a kid! That will sell a bike every time, when you find that right buyer. 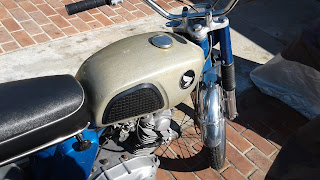 While that one was pending sale, a 1982 Honda FT500 Ascot showed up in running condition, but needing some TLC in the usual places that these bikes require. The air box was cut in half, which allows a large K&N air filter to be used in conjunction with some adapters to allow use of the crankcase breather system. The bike has a custom-made rear luggage rack that even included little LEDs in the back end of the rack rails. The owner worked at a metal fabrication shop and thoughtfully created a sturdy rack for his lunch box, while commuting to work. The seat cover was original and splitting apart, so a nice aftermarket replacement cover was procured and installed with the help of an upholstery shop. My staple gun didn’t have enough power to put staples into a plastic seat base. Fortunately, the seat foam was still intact, so a cover was all it needed to make it attractive again.

After some trial runs, it seemed that the carb jetting was a little off. The spark plug looked pretty good, but there was a flat-spot off the bottom into mid-range that was annoying. All the testing revealed an oil leak at the camshaft rocker arm cover, which was an ongoing problem with those bikes and the related XL500s back then. I ordered a gasket kit (EMGO) but the head gasket was less than stellar. A couple of the bolt holes were off by half a hole. That necessitated some gasket mods to get it to go together again. The camshaft lobes were somewhat pitted, but not necessarily from lack of lubrication. This seems to be another problem area for these bikes, perhaps due to insufficient surface hardening. When the rocker cover was removed, it was evident that someone had been in there before, as a number of bolt holes had inserts installed to repair stripped out threads. Again, this is another long-standing problem with these bikes.

The balancer shaft adjustment can only be made by removing the clutch cover. The spring-loaded tensioner arm moved a couple of notches before coming to a stop. Honda recommends backing off the tensioner one notch from where it stops.

When the carburetor was removed for inspection and jetting, it appeared that the slide piston was somehow jamming up into the top cover, so the throttle never really fully opened to full power. A friend had some CX500-650 used carburetors, which share the same components as the FT500s, so that fixed that problem. Eventually, I would up with a #150 main jet, the CX500 needle with shims and a larger idle jet to finally solve the performance issues.

The bike came with bar-end mirrors, so I wound up spending over $100 for a set of OEM mirrors, which are just about gone from anyone’s stock now. After a test ride, the right front turn signal lens promptly broke off and fell into the street as I came up the driveway. A pair of OEM lenses was found on eBay for $15 including shipping, so now I have a spare, just in case this happens again. I have never seen that happen before! It was like something out of a comedy show… ride, ride, clink, clink…. Stop and recover the lens from the driveway. All the other three seem to be just fine.

The electric starter systems on these bikes are somewhat problematical so the covers were removed and the system inspected, cleaned and serviced. So far, it is working well now. The FT500 is up for sale now, as I continue to try to trim down the motorcycle herd nestled in the driveway. 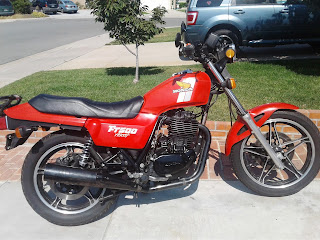 The last three people who reported hard starting problems had bikes with battery levels that were WAY TOO LOW to allow the battery to charge up and stay charged. These lead-acid batteries need regular checking at least once a month.

Finally, a long-time customer rang me up to ask about redoing the top end on his CT90K1 Trail 90. In general, parts have been available from Honda and the aftermarket for many years. Honda must have build a couple of million of the OHC 90-110cc horizontal singles since their 1965 introduction. Honda placed those engines into ST90, S90, SL90, CT90, ATC90s and many, many more.
Taking the top end off is about 15 minutes work, even with hand tools, so the autopsy can be done quickly when there are problems. The bike was using smoking and using oil since the last visit, so the focus went to the piston/rings/cylinder bore primarily. Despite a smooth-looking bore, when the top compression ring was removed and fitted to the ends of the bore, the bottom measured out at .008” while the top measurement was out about .020”+, so obviously there was a taper in the cylinder bore.

The bike only showed about 4400 miles on the odometer, but the overall condition was fair-average. The bike has been used as designed, out in the sand, gravel and general off-road conditions. When the piston was extracted, the first thing noticed was a loose-fitting piston pin clip, consistent with those found in a lot of Chinese-made piston kits. The piston was marked 028 (product code for an S90), but it had a 3 piece oil-ring, which the bike never came with from the factory. I wondered why a low-miles bike would have a replacement piston until I removed the carburetor and discovered that the little choke flap was missing from the choke plate! It was another case of flap failure, which I have seen on many of these kinds of carburetors made in the 1960-70s. The spring loaded flap fails and gets sucked into the engine, where it usually jams the intake valve open long enough to have the piston come up and bend it smartly. The valves in the head were cupped at the seats, so new valves were ordered and fresh valve seats cut in and the head assembled for final work.

There wasn’t any sign of catastrophes inside the combustion chamber, but the head could have been changed when the piston was damaged along with the valve. There were a few Heli-coils in the threaded holes, so obviously someone had been inside the engine at least once before it came my way. When I started looking for an over-sized piston, I discovered that Honda has discontinued the S90 series pistons and ring sets from US inventories! It is one of those things that will last forever, but I see that this isn’t the case now in the 21st century. I was able to find one set of OEM rings at a Honda dealer up in Orange County, plus one matching OEM piston from an eBay seller in Texas. I tracked down a pair of 14mm wrist pin clips after going to two different dealerships….. ?!?!? It really is shocking that you cannot find wrist pin clips in stock at a motorcycle dealership these days. The first local dealer didn’t stock them and the second one, some 12 miles away only had two available. I guess people are not rebuilding their bikes much anymore….  Sad isn’t it?

I did find that the camchain was pretty well stretched, so a new chain and guide roller were ordered up, along with a quality Vesrah-branded gasket set. These engines have a valve stem seal on the exhaust valve side, which was replaced with a spare that was in stock, but it was surprising that the complete gasket set didn’t have this tiny part included.

Two 25-mile round trips later to drop-off and pick-up the newly bored cylinder yielded a nice smooth, straight and round cylinder to fit a new piston into, now at factory specs. As fast as it is to tear down one of these engines, the reassembly/repairs take several hours. The valve job probably took about 45 minutes as the seat contacts were adjusted several times until they centered on the valve head. Scraping gaskets, checking threaded holes, replacing seals, doing a valve job, cleaning parts and carefully reassembling this little engine takes a lot of patience and some expertise.

With the carburetor cleaned out, float adjusted and some new gaskets/seals installed the engine finally was ready to run, once again. The engine fired up after a few kicks and once the oil solids coating the inside of the exhaust system burned off, the engines ran smoothly, with little noise or smoke evident now. It will probably receive a slow break-in period at the hands of the owner who has enjoyed it, even as it was, for many years.

The CT90s have a dual activated rear brake, which also incorporates the brake light switch. If either of the rear brake functions jams up, the brake light will stay ON and eventually run the battery down because the little 6v system is barely up to the task of keeping a fully-charged battery up to normal voltage levels. This bike was a 1969 CT90K1 which had a front brake light switch function as part of the brake cable. The cable was changed to a non-switch version, so loose wires are flying in the wind at the front fork area. Honda made many changes to these bikes through the years, so keeping them stock with OEM parts is a challenge now.

I think that brings us up to date so far… MrHonda
Posted by MrHonda (Bill Silver) at 5:01 PM