Although you will find parts ads and other listings for Honda “Dreams,” which wind up describing CA95 Benly or CA160 Touring 160 models (sometimes called Baby Dreams), the only true 1960s Honda “Dreams” are the 250-305cc models.  Only a few parts will actually interchange between the two series (Dream vs. Benly), such as the ignition switches and the rear shock covers. I usually refer to Benly/CA160 models as a “7/8 scale Dream.” Despite similarities on the chassis design, headlight shape, suspension function and 16” wheel sizes, Honda made the 150-160 models completely different all over.

Another parts issue that arises for new owner’s is their bikes often need new batteries, so they search for “Honda Dream” battery, instead of the correct “Honda Benly” (or CA95 CA160) battery. The Benly series machines are ALL SIX volt electrical systems, so a “Dream” battery won’t fit in the battery tray, in any way, shape or form and if it did, it would immediately fry all the electrical components in a Benly series bike.  A secondary cause for confusion was that the CA160 models (no longer called Benlys, although they were essentially a 150cc Benly with a 160 engine installed) continued to use the SIX volt electrics, even though the CB160 and CL160s had adopted TWELVE volt systems. This is just one part of the battery dilemma for vintage Honda Benly-Dream owners.

In a perfect world, Honda 250-305 Dreams would all have the same TWELVE volt battery, but of course they do not.  When the first dry-sump 250-305cc Dreams were released in 1957-60 timeframe, they had large SIX volt batteries installed, in order to crank over the engine efficiently. When the new wet-sump Dreams were released in late 1960, the revised machine was equipped with a full TWELVE volt electrical system. Honda cranked out thousands of early 250-305cc Dreams from 1960-65/66 with the same battery, which was somewhat taller and thinner than many other batteries on the market.

Invariably, new Dream owners go online, see Honda Dream Battery listings and assume that one battery fits all models, including theirs. So, you can imagine the surprised buyer when the battery that they receive is nothing close to what they needed, if their bike is the “early” style battery type.  The few remaining early type batteries are sold as WISCO JB-2 editions. There was a GS branded battery offered under a slightly different number, but Honda has long discontinued the early style YUASA MB J4-12 OEM batteries due to their rather sparse sales numbers and singular applications.  The early batteries are 7 3/8" x 2 9/16" x 5 1/2" (LWH) YUASA batteries are a highly known and respected manufacturer of motorcycle batteries, but I have often found that there are ordering errors, even on their own website. The last time I checked their site, the 12N9-3A batteries were no longer listed.

The first generation of those “new style” batteries had horizontal terminal posts, but in recent years, the posts were changed to an upright design, but no change was made to the part number. There are inexpensive aftermarket batteries being made now in Taiwan and elsewhere in SE Asia, with tiny 5mm attachment bolts instead of the previously supplied 6mm hardware. So, double check the specifications of the hardware to avoid disappointments.  Current EBay listings for Honda Dream batteries show various types, some showing 1963-66 applications, which makes no sense whatsoever. There are new maintenance free batteries and even lithium ion batteries coming to market now, but nothing new that actually fits the early Dream model frames and hardware properly.
So, why is that important?
Good Question!
The answer is that the battery holds an air filter body cover in place, on the side of the frame. The cover has no attachments or hardware to secure it where it belongs.  Only the correct-sized battery will hold the cover in the frame recess and be properly secured in place by the tool tray.  You cannot mix-match batteries, tool trays, battery ground straps, battery covers/latch knobs and their respective frames.

Check the illustrations accompanying this report to see some of the details surrounding this long-standing issue for Honda Dream owners. 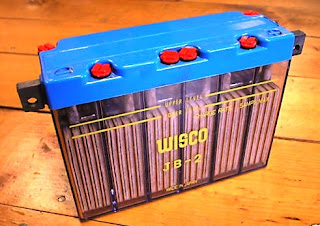 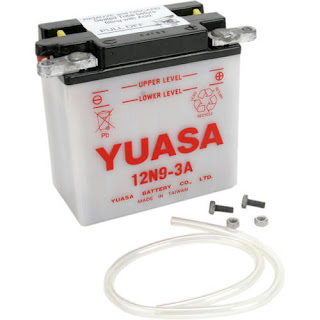