I was recently contacted by a SoCal gentleman who was complaining about some oil leaks on his 1963 CA77 Dream. The serial numbers on this bike are CA78-311781 with engine number CA77E-316817. Whereas, virtually all 250-305cc Honda twins have serial numbers which are within 200 digits from each other, this one has numbers with a five thousand+ number spread.  If you deduct the five thousand number difference, the engine/frame serial numbers are only 36 numbers apart.

Below are some examples of strike-through numbers, apparently done at the factory, but could have been done at a dealership. The mystery will never be solved, I'm afraid. 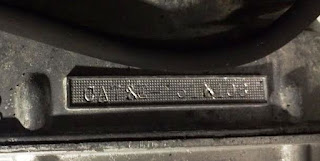 I recall hearing from a few CA77 owners who were wondering if their bikes had the original engines in them because their serial numbers were a little over five thousand numbers apart. I just figured that the bikes had experienced an engine swap somewhere along the line and that was that.

However, over the past few months, a VJMC member and Dream enthusiast, named Bill Soli, began inquiring about the fact that more than a few bikes from the 1963 model ranges were showing up with a five thousand difference in their numbers.  He had been polling forum members from various sources and collecting numerous examples of this five thousand number spread effect. Obviously, this was not just a random case of engine swapping now. Something significant was going on, which was not reported within the Honda serial number listings, released to date.

American Honda’s parts books listings left a big gap in the timeframe from when the original 1960-62 bikes were changed over to the restyled “CA78” versions, These were only mentioned as beginning production in 1964. Apparently, 1963 models didn’t seem to exist, according to the AHMC records. Honda’s parts books show 901 versions of the CA77 models being built in the 1962 year of production, then just skip to the six digit serial numbers of 1964.

There is nothing remarkable shown here, which is what I have used as a reference for a number of years.

You can see that Honda went a little schizoid with their numbering system. First, they used a series of 6 digit serial numbers that began with a ONE for a while, they then changed their minds and began using serial numbers beginning with a FOUR, which is more inline with the previous years.

Secondly, they switched from calling out their chassis numbers from C/CA77 to C/CA78. This corresponds to the changeover from the early seamless fuel tanks to the reshaped seamed tanks, which also relocated the fuel crossover hoses from the front of the fuel tank to the middle section. The chromed fuel tank side covers were reshaped, along with the rubber knee pads. This also ushered in the changed fuel tank’s plastic emblems script from “Honda Dream 250 or Dream 300” to just plain “Honda 250” or “Honda 300” styles.

There are other changes in the C/CA78 series, regarding the handlebars and controls. The clamp-on mirrors, sourced from the CE71, were replaced with CB72 lever brackets, which incorporated mirror mounts on a raised pad. The hidden throttle cable system, sometimes called “Slide throttle” was also introduced. On the “delete” list was the formerly included tire pump, with mounting brackets and lock.

What really occurred, shown in some entries within the large “World version” of the parts books, is that the changeover from C/CA77 to C/CA78 happened during the 1963 model year, instead. Adding to the confusion is that the 252-305cc Dream was ALWAYS called a C/CA72-77 Dream and the 305 engines were ALWAYS stamped with C/CA77 all the way through their entire production life. If you see an engine with the numbers stamped C/CA78E, it is a fake.

Suffice to say, now, that owner’s of 1963-series Honda Dream motorcycles who find themselves faced with this five thousand number spread between engine and frame numbers can now relax and be assured that their bikes came from the factory, serialized in this way.

Please note that I have been using C/CA77 or C/CA78 notations to cover both U.S (CA72-77) and domestic/Euro versions, which were identified as C77 or C78 models. U.S. models came with turn signals deleted, plus dual seats included; whereas many domestic C-77/78 models might have had sheet-metal handlebars, winkers (turn signals), solo seats w/luggage racks and even rotary shift gearboxes.

The whole CA77/CA78 engine/frame number system causes great confusion among new owners and all I can tell them is that “it is what it is.” Honda had their own way of doing things, logical or not, but not to fret when the frame numbers don’t seem to “match” the engine numbers.  All you have to remember is that ALL 305cc Dreams had CA77 engines, no matter what the frame numbers indicate.

Hopefully, I have cleared up some confusion about the serial number system for the 1963 editions.  Next time, we can discuss why Honda put a SEVEN in the serial numbers, right after the first digit, instead of a zero.  Isn’t this fun?      Bill “MrHonda” Silver