I can’t say that I have really spent any time on one of Kawasaki’s long-running EX500 Ninja models, but one came available on Craigslist that I couldn’t pass up. These bikes were in production for 22 years, with few changes other than adding a rear disc brake, larger wheels and smoothed-out bodywork in 1994. 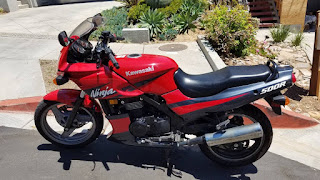 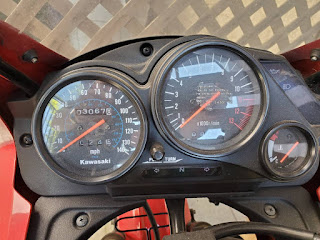 The Kawasaki Ninja 500R is a Sport Bike with a 498 cc parallel-twin engine, part of the Ninja series of motorcycles manufactured by Kawasaki from 1987 to 2009, with a partial redesign in 1994.

This bike was a California-emission spec model, so equipped with a carbon canister and pulse air system. The history, from the seller, was that the bike was bought new in 2002 and the original owner had put about 500 miles on before tipping it over and scaring himself from riding it again. The bike sat until about 2012 when it was offered for sale. My seller picked it up, replaced a turn signal, added a new set of tires, a new battery and had the carbs cleaned. He rode it for a total of 2500 miles in the 7 years he owned it, then decided to make space in his garage for new endeavors.

Apart from a little scuff on the left front edge of the fairing and a few scratches on the mufflers and bodywork, the bike is quite nice. When fired up, the engine was clearly not running on the right side at idle. It seemed to run off-idle, but faltered when idling, even after a warm-up. Our shared opinions were that the idle jet was probably clogged up from lack of run time. Faced with having the carbs cleaned again in order to facilitate a good sale, the owner offered it to me for $200 less and I agreed to take it off his hands.

Once it arrived back home, the seat and tank were removed for carb removal/cleaning, however I noticed that there was an emissions vacuum line lying loose near the carburetor. Tracing it back to a junction, it appeared to need to be attached to an engine vacuum source. There are fittings on the intake manifold stubs for vacuum to the petcock on the left cylinder and the right side one was found to be unplugged which is where the vacuum line was supposed to be connected. It all made sense now that the engine wasn’t idling on that side due to a large vacuum leak! I did remove the carburetors and had to reset one of the float levels, but the jets and bowls were still clean, so the loose line was the actual culprit.

With the carbs reinstalled and all vacuum lines connected the bike fired up and ran well. The ergonomics are just about right for my dimensions and I was especially pleased to find out how easily this bike can be pulled onto the centerstand. Ah, the centerstand! This lost relic on many models now, is a treasured feature on street bikes, these days. It makes chain maintenance so much easier and gives the bike a different option to be parked, as well.

While on the centerstand, I turned the back wheel to check the chain slack and noticed that the rear hub has a cush-drive setup which seemed to be worn to me, with a noticeable amount of play in the back and forth directions. With only 3k miles on the bike, it seemed like an odd amount of wear. I ordered a new $60 damper for the wheel but was disappointed to find that a new damper had about the same amount of free play as the original. Apparently, age was not a factor in the old part, but an odd engineering oversight.

Between the gear lash in the transmission and the built-in slack from the rear hub, there is a bit of backlash when on and off the throttle that is attributed to both factors. There is an EX500 forum, with a resident guru who offers a few improvement bits and sage advice. His suggestion was to add in some pieces of an aluminum can to pack in around the damper, in order to tighten up the assembly. He also offers some rear suspension dog bones that raise the rear end about 1.5” in order to change the geometry enough to eliminate some odd handling quirks in these models. However, jacking up the rear end negates the function of the center and side stands, without carrying some stand assistance pieces onboard. Carrying around a 2x4” board in your backpack might be an option for some, but I would seek other options, personally.

I noticed that when I reinstalled the rear wheel, the right side axle adjuster tended to squirm around when the axle nut was tightened. The only way around it was to tighten the axle into the nut with the provided tool kit wrench. Yes, these bikes do seem to have a few quirks, despite their lengthy development time.

Closer inspection of the rear axle setup revealed that there was a gap between the rear caliper bracket and the inside of the swing arm as you go to tighten the axle nut down. I found a 1.5mm shim to slide into the space and that seemed to help out quite a bit. There’s no reason to be pinching in the ends of the swingarm just to tighten up the rear axle hardware. So far, the bike has been up to an indicated 95 mph with no problems in the handling department.

The other puzzling issue was that the rear brake pads were worn quite thin. I ordered some EBC pads online and they installed easily with 3x the thickness of the originals. The front pads still seemed to have decent amounts of material left, so I guess the previous owners were rear-brake oriented.

Overall, the bike is really pretty good. It has a few more rated horsepower than the manic CBR250R that I ride, but weighs about 75 lbs more in wet weight. Obviously, the 500 twin has more torque and is geared higher for more relaxed freeway cruising at half of the engine speeds as the 250-4. Both have been getting close to 60 mpg, so quite economical to own and enjoy. 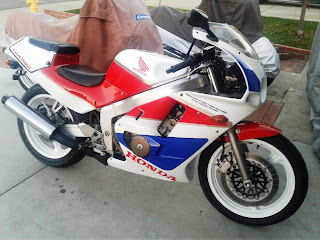 The only Kawasaki motorcycles I have owned in the past were a 1984 GPZ550 and a trio of 2000-2001 W650 twins. They are solidly-built machines with numerous positive attributes. Even though it seems out of character for MrHonda to own bikes from the K-brand, I think it is healthy to sample and appreciate bikes from other makers, especially when they bring a strong sense of satisfaction to the riding experience.