I’ll be the first to admit that I HATE to clean old motor parts, especially scraping baked-on asbestos gaskets on the old 250-305 engine series. I have spent about 10 hours of my life in those pursuits just in the past few weeks and I am TIRED OF IT!

After completing a CB77 engine recently, which was favored with a vapor blasting job, I reluctantly agreed to do ONE MORE engine overhaul on a 1964 CL72 engine. It was delivered on a homemade engine stand, which was handy for initial tasks that included tear-down of the top end and loosening some engine case bolts. The entire engine was basically an abused mud-ball of clay dirt, baked and sealed into the open aluminum pores which are so prevalent on the many sand-cast engine pieces. This turned out to be one of the most challenging engine rebuilds I have ever done, due to the outside grime and the inside baked-on varnish, which only comes off with physical scraping. It was awful….

At least it turned over, but getting many of the screws out was a test of patience and endurance. The engine task included a total of three engines from which to choose the best parts for the rebuild. The customer told me that it would need a good cylinder, due to fin damage and probably a cylinder head, as well. Not until I got the head off that the magnitude of a previous attempt to remove the head made itself known.

The owner’s “helper” attempted to remove the head without disconnecting the camchain, apparently thinking that the engine was a push-rod twin, perhaps. When the engine was viewed from the right rear, it was obvious that someone had broken several of the fins in a misguided effort to pull the head off. When I disconnected the camchain and removed the head, I discovered huge gouges in the edges of the cylinder head surface and the top of the cylinder block. That damage was fresh, but it became obvious that the top end had been rebuilt once before, as there were .25 over-sized pistons installed. Apparently, the correct 54mm head gasket was not readily available at the time of the engine build, so the previous mechanic just placed a 61mm 305cc head gasket on the cylinders and put it back together again. The baked-on varnish, a result of years of sitting on the internal parts after being severely overheated were so gummy that the transmission shift forks wouldn’t move because of the varnish build-up between the two forks on the shift drum.

A reconstruction would require a good replacement head and cylinders from another 250cc engine. Fortunately, my friend, Ron Smith, happened to have a spare CL72 engine that had been an inhabitant in his garage for the better part of 10 years. We arranged to have me pick it up from Ron’s Pacific Beach home and the lump was deposited in the rear of the shop area awaiting the needs of the customer engine.

Both of the CL72 engines were packed with mud, hardened old grease and varnished innards due to lack of engine changes and/or engine overheating of the oil back in its history. The customer engine’s internals appeared to be fairly clean and unworn as far as the cams and rocker arms were concerned. Once the head was disassembled, the cam sprocket showed signs of loosening rivets, however, so that would either have to be welded or replaced with a known good part.

Ron’s engine was pretty much fried inside, with well-worn camshaft lobes, rockers and a lot of varnish inside. Apart from one cracked fin on the cylinder head, the head and cylinder block were sound, but filthy full of dirt and grease. Wouldn’t you know that the “last one” would be the worst one to clean.

The customer engine also had a chunk missing out of the bottom case, back below where the countershaft sprocket is located. I still had the remains of a 1962 CB77 bitsa engine, which had a good bottom case, so that engine was cracked open to donate a few parts, including the bottom engine case half. Some ill-advised mechanic had put the engine together with orange RTV silicon sealer, which adhered to everything, requiring patient residue removal efforts.

The customer engine showed signs of some bottom-end work, judging from the condition and type of fasteners used. Careful inspection showed that someone had swapped in an earlier model transmission gear, which used straight-cut gear dogs instead of the later type, that used back-cut, angled gear dogs. The whole low gear bushing had the separating ring worn off and the kickstarter pawl was severely worn down, where it contacts the inside of low gear.

The gear dogs were worn on the drive side due to a lack of proper gear dog overlap which caused the transmission to jump out of 2nd gear. Signs of its struggle were also seen on the high point of the shift drum where it engages the fork that drives 2nd gear. Offset gear cotters were installed, along with new 14mm shaft bushings on both ends of the layshaft. One end bushing was severely worn where the kickstarter pawl was digging into the bushing for many miles. The other end bushing which helps to contain the rollers had a crack in the edge. That was a very unusual part to suffer damage from my experience.

Fortunately, I have a storage bin full of used transmission parts, so sifting through the pile turned up just what I needed to put a good transmission back together again. The last little trick was to X the gears, which closes up the gear gap jump from 1st to 2nd gear. The 250 engines respond to this modification well, as they lack the grunt and power of the 305 models.

The customer engine came without anything installed in the kickstarter cover, so I had to dig out a kickstarter arm and pin from my stash, a knuckle, clutch lifter/adjuster and return spring setup from Ron’s engine. The remaining parts came from eBay which came to about $35 for just a handful of clips, springs and a ball bearing.

The engine casings and top-end parts were repeatedly cleaned in various solutions, including a pass with some oven cleaner, but much of the embedded dirt needed direct removal using a combination of rifle brushes, rotary brushes, stainless steel wire brushes and small pointed metal tools to get down into the nooks and crannies of these complex engine castings. I generally do not paint these engines, apart from the clutch covers and kickstarter covers, but I am probably going to make an exception to my usual practices, in order to brighten up this grubby little motor.

Unfortunately, both of my “cleaning” resources were unavailable, so I wound up spending over an hour on each one, just to get them close to presentable. I had to clean two different clutch covers before I was able to use one with confidence, but that one needed some JB-Weld repairs for a small dent just below the oil filter cover area. Even the outer filter cover got a patch to cover some road damage. Every one of the filter covers I had in stock was damaged almost exactly the same way and place. The right side dyno covers are also NLA these days, but the solution was a $95 billet cover made on a CNC machine.

The cylinder head from Ron’s spare engine received all new valves, once the seats were cleaned and cut fresh to make a good valve seal. I was surprised to discover one VERY loose fitting intake valve in the head due to a worn valve guide. I have had valve guides floating around in my spares for years, as they seldom go bad, but I really needed one this time! Once I coaxed the new guide in, I had to clean it up with a valve stem reamer, then re-cut the seats again to match up with the new valves.

The customer cams and rockers were reused and the best of a couple of sets of valve springs put back into the engine. I have found that you have to check the valve springs carefully, as one had the end broken off. A near-new cam sprocket was discovered in the parts bins, which had matching spline patterns which took care of the problem of the loose rivets and floppy return springs.

All new chains will be installed, including primary chain, oil filter chain and camchain. I get the primary chains and oil filter chains from a vendor in the UK, which is great because the OEM parts are NLA and extremely expensive if you do happen upon any of them now. I replaced the camchain guide roller with one from CMSNL, which reproduced them recently.

The most expensive part of the engine build would have been a $200 NOS camchain tensioner, which seems to be one of the last remaining ones on the planet. With some digging, I was able to purchase a usable camchain tensioner for $15 on eBay, so the new one will be resold or swapped for something else, perhaps. I had a NOS D.I.D. endless camchain in stock, so decided to assemble the engine with that.

Ron’s cylinder block was still on STD bore, but there was some rust in the cylinders, which required a first overbore to match some pistons that I had left in stock. Stock CB72 pistons, used in the CL72 engines have a pretty high dome anyway, even in the lower 8.5:1 compression versions. My spares are the 9.5:1 versions, which will give it a little extra kick.

It seems like my self-inflicted punishment for not stopping the rebuild process, after the last CB77 completion, is being tethered to a solvent bucket and scrub-brushes to clean the grime from all these parts, one piece at a time by hand, which is a most unpleasant task at my age. After this one is complete, I declare “Enough!” 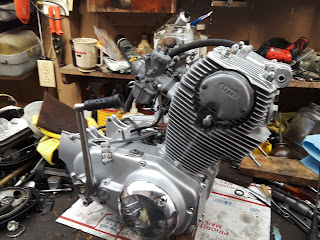 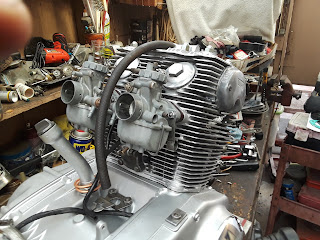 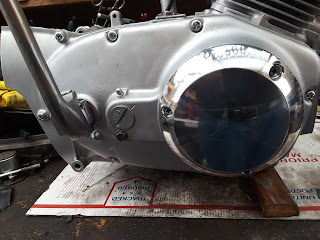 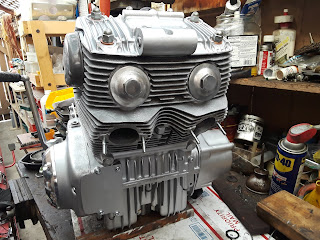 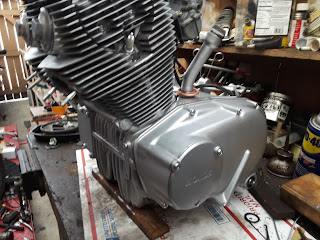 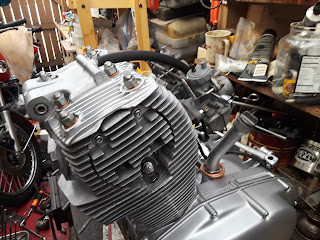