In my current (and hopefully last) Honda 250 engine build, I am in the middle of piecing one good engine from 3 engines in total. Two of the three engines are CL72 250cc twins from 1964-5 and a 1962 CB77 engine that was leftover from the last 305 engine build.

In the middle of all the current mess, I received a message from a SoCal CL72 owner who was having difficulties in getting the kickstarter to operate correctly. He had a local shop tear down the bottom end to have a look and this is what they found… 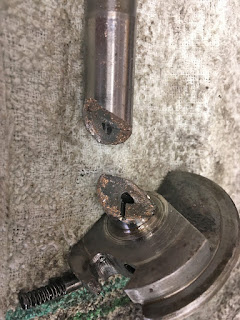 In all my days of dealing with the 250-305 engine group I have never seen a kickstarter shaft snapped off like this one was. More damage photos followed: 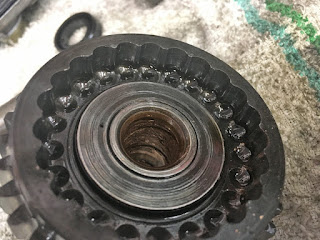 Low gear bushing ground away inside and the shift shaft splines twisted at the end… on a bike that had 5k miles, according to the owner. Wow! The parts bill for everything he needed was $350 alone. 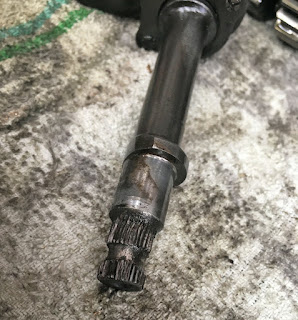 Fishing through the three engines, here in the shop, revealed more disasters in the making. The 1962 CB77 engine didn’t come with a primary chain tensioner, but this one had a lower case change to include that feature. The bottom engine cases are mostly interchangeable, so fitting a 1963-on lower crankcase half was a good idea. The REALLY sad part of this engine was that it was fully assembled with orange RTV sealer on all gasket surfaces and the engine case halves! For those who think this is a good idea, I just have to say NO, NO, a THOUSAND TIMES NO! 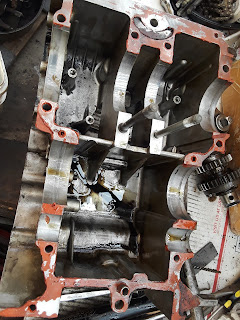 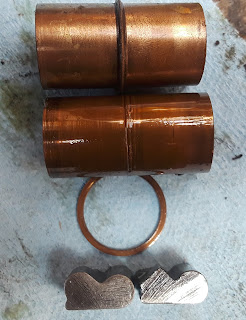 In dividing the various transmission shafts up for inspection, I found a low gear bushing with the center ring floating inside low gear, a kickstarter pawl with ground down ratchet surface and the substitution of an early 2nd gear, which has straight cut gear dogs installed to mesh with a gear that had backcut gear dogs. I can’t say that I have seen this bushing cracked like this, either. 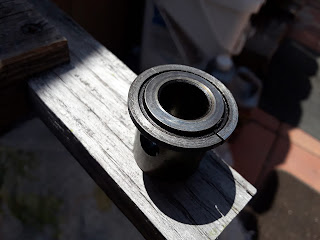 The hat-shaped 14mm end bushing had deep gouges in the surface from the kickstarter pawl contact and the gear dog overlap was less than 10%, with wear showing on the edges of the gear dogs from jumping in and out of 2nd gear. The shift forks were worn and old varnish deposits caused the shift drum to hang up inside the shift forks, preventing easy shifting of gears. The shift drum retainer plate had cracks in both screw holes and the forward kickstarter shaft bushing had a crack along the trailing edge.

Based upon general observations in the past 30 years of working on these engines, I would put the suggested parts lists to include:
*Low gear bushing, especially of the center ring is worn loose, as above!
*Kickstarter pawl, including the spring and plunger
*Kickstart shaft, if the roller bearing surface is damaged or the splines are twisted
*14mm end bushing
*Offset gear cotters ( 2 or all 4)
*Shift forks (reuse good ones)
*Shift drum (reuse good ones)
*Shift fork Roller bolt locking tab washers 2x
*Crankshaft locking tab washer
*6mm sealing washer for that long nut on the bottom case.

If the transmission has been jumping out of 2nd gear, then make sure you match the correct gear(s) for the rest of your transmission’s requirements.

If you look inside the top of the clutch cover and see a small shiny spot worn into the case housing, then the primary chain has worn beyond limits. If the primary chain is worn, probably the oil filter drive chain is also worn excessively. Replace both items. Aftermarket replacements are available from UK vendors.

Be aware that most of the basic return gearshift transmissions all use the same basic shifting selector parts, so you can go fishing for what’s needed outside of whatever model you have now. There are differences in the old/new CB/CL transmissions, including a late 1966 change in the spline depth. Dream transmissions had very few changes, but you can’t intermix Dream and CB/CL transmission gears. 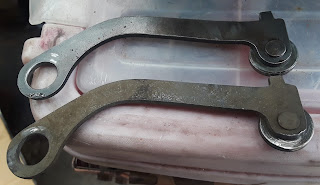 Shift drum roller, locked up in above photo, lead to wear on the roller and arm just below the roller rivet pin.

Remember that all the transmission and shift selector repairs can be done with the bottom end of the cases split. You don’t have to tear down the whole engine to do lower end work.

While you are in there, check the condition of the neutral switch. Many have broken wire connections or all full of dirt/grease and can’t make the required ground connection to turn on the neutral light. Check function of the switch before you put the kickstarter cover back on.