And so it begins again… will the CL90 circle be unbroken?

It was my very first motorcycle; a 1967 Honda CL90 Scrambler 90, which turned up at a local used car lot, apparently traded in by a local serviceman. I don’t recall how I got the money, but I think the price was about $350 and suddenly it was MINE!
You may have read the saga of my 1500 mile journey on the little Scrambler 90 in just 3 days. I began in San Diego, riding up the Hwy 395 eventually to Reno, then back over the mountains, out the I-80 to Sacramento and San Francisco then down the PCH until I hit Playa Del Rey, CA.
The bike seemed capable of somewhere around 60 mph and it was ridden at pretty much full-throttle for the whole trip. I stopped every 100 miles and put in ONE gallon of gasoline, then off I went again. I did virtually no maintenance to it, apart from keeping the oil level topped off. It just ran and ran and ran…
Having run through something like 400 cars and bikes in the past 50 years, I have seen a few decent examples of the little Scrambler, but most were in a rather poor condition with worn or missing parts and generally lacked decent care. I don’t actively seek out my “first bike” these days, but one pretty good example came my way via a phone referral from nearby Carlsbad, CA. 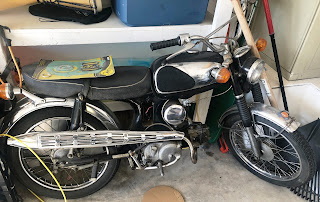 I was puzzled, at first, in that the bike had most of the CL90 parts, however, it had a S90 fuel tank mounted up in place of the little Silver Scrambler tank that one usually sees on a CL90. The message sender came back with “I liked the looks of the S90 tank, so I put one on the bike. I still have the original CL90 gas tank, though!”
The bike appears to be a 1968-69 edition, which featured chromed fenders, turn signals and the little front fender reflector, unlike my plain-Jane 1967 machine, which probably came from Okinawa. The bike didn’t have any turn signals and the fenders were painted Cloud Silver, just like the tank. Honda 90s were no strangers to change, although the main CL90 chassis appears to be interchangeable with an S90, there were CL90-specific parts used to differentiate the two models. The fenders, seat, muffler, fuel tank, and handlebars were the principal differences. Mechanically, the two were mostly the same beneath the cosmetics.
I happened to be in that part of the county, last week, so arranged to see the bike and perhaps take it home…
In all of its “glory,” the bike sat at the opening of the 2 car garage, awaiting inspection and/or purchase. It’s funny how the first impressions, felt in the gut, will give you a feeling of attraction or repulsion and unfortunately, the latter came into full force almost immediately. The list of deficiencies ran long, right from the beginning. Most all of the chrome was pitted to some extent and the bike hadn’t been started for quite a while. A lithium battery was installed and had enough charge to light up the neutral light, but a few kicks gave no joy. A check of the fuel tank revealed nothing inside. I did bring a compression gauge and got readings of 150 psi, which was hopeful. The miles showing were about 1500 and appeared to be original.
Among the missing were: chain guard, battery cover and center stand. The original CL90 fuel tank was in a separate box and there were telltale dents on both sides at the front edges. That usually only means one thing… steering stops on the frame sheared off from a crash. The end of the throttle grip was torn and the rear brake pedal was bent upwards beyond the footpeg, all indicating some forceful damage due to a crash at some point in its life. The bike had an original CA “Black plate” which are revered in the Golden State as being original to the bike and seen on all cars until about 1969. Unfortunately, the bike had never been registered to the seller since he took ownership sometime back in the 1970s.
Right before I left (Sorry, I have to pass on this one), I checked the serial numbers and discovered that the 2XXXXX numbers on the frame were not backed up by the engine numbers, which were 1XXXXX instead. There were a lot of Allen screws installed in place of the normal Phillips head screws, so someone had been doing some kind of repairs or just installed a different engine. Both were CL90 series though, instead of an S90 engine transplant which is often more commonly seen in situations like this.
With only the one photo to go from, I couldn’t tell just what the “value” might be. The seller put out a feeler at $1,000 initially. In an ideal situation with a near mint bike, the price might have been supported, however, this one was far away from that kind of price range. I felt that something in the $400-500 range might be more appropriate, given the condition and the many needs of this little Scrambler. I offered to help him sell it and posted photos on Facebook forums that evening.
I forwarded three potential buyers to him and one apparently showed up and paid $700 for the bike and was excited at the prospect of getting it going and maybe doing some level of restoration to it over time.
So, in the end, it was not my time to revisit the “first bike” scenario again and that was probably a really good thing, as my time would be sucked up in a fruitless labor of love, which would reduce my customer repair time, where I actually do make a little money these days.
Well, no doubt, there is something else waiting in the wings for me and my little envelope of cash leftover from the sale of the Honda Reflex scooter. In the meantime, the “Unique CB400F” bike featured in previous posts is getting revamped back towards stock again, but with a few little twists to make it a little more “cool.” Stay tuned for that update.
Bill “MrHonda” Silver
07-19
PS/// Same bike showed up on CL for $1500 asking 2 days later...