It seems very odd that vintage Hondas show up in my shop and in life in pairs. I generally don’t buy two of the same bike, but lately one shows up for repairs and then I find one like it for sale. Like my creampuff 1995 Cougar XR7 (80k original miles), I seem to get involved with niche market models of cars and bikes.  Consider the previously reported Tracy-bodied CB400F which had a stock, red CB400F partner come down from Orange County for a repair visit. Before that, there was a pair of CB77 Super Hawks, which showed up not long after a brace of CB92s came through Casa de Honda.

So, it wasn’t surprising that a blue version of the just-repaired orange CB400A showed up on Craigslist at an attractive price. It was a 90-mile round trip to go see and buy it, but the previous owners had been enjoying the bike for the previous 10 years, so it seemed like a reliable mount. When I arrived, I found a used, but not abused CB400A with 12k miles showing on the odometer.  The fuel tank had a small dent and the petcock had a tendency to weep if you put the lever in the full ON position. The oil needed changing and the drive chain hadn’t been adjusted for quite awhile. After a quick run down the block, I made a deal with the sellers and loaded it up in the Tacoma for the return home. 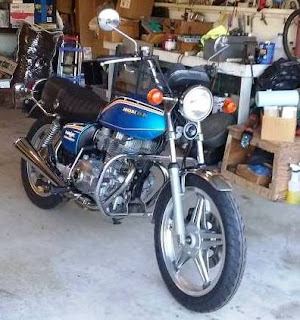 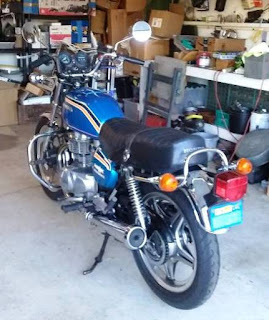 Once it was unloaded from the truck, a closer look for maintenance items seemed to indicate that perhaps the balancer shaft adjustment had never been done. I drained the oil and filter, which allowed for somewhat easier work on the torque converter covers. It is a messy job with oil coming out of the converter and from within the outer case covers.  The balancer adjustment required moving the adjustment arm one spline to get it set properly.  Fortunately, the gaskets came off clean, so everything was put back together without any new parts.

When the seat was removed from the chassis, an odd thing was noticed in that the little tray for the tool kit had been hacked off, perhaps to enhance air flow to the air cleaner inlet. A decent replacement was purchased from an eBay seller, but the swap continues to be delayed, as it appears to require rear wheel removal at the least. It is a deep, complicated piece that forms the forward portion of the rear fender.

One of the cautions from the seller, during the purchase, was that the countershaft seal was weeping oil, so new seals were ordered. After a couple of days, the 4into1 parts order arrived and work was undertaken to fix the seal issue. There are two seals shown in the parts book illustrations, but it wasn’t clear as to how they both worked together on the output shaft. One seal was mounted on a thick steel washer and the OD was larger than the actual countershaft seal outside diameter.

The first seal was stubborn and took a good 15 minutes to extract from the engine case. Behind it was the steel back seal, which I attempted to remove, but quickly discovered that it was actually sitting inside a groove in the cases. The only way to properly change it is to split the cases! I spent over an hour grinding, drilling and working on the seal extraction, which was required now that the seal lips had been damaged during the initial removal attempt. Drilling holes 180 degrees apart on the sides of the seal base allowed for it to kind of fold over and eventually be removed. All of the physical exertion in the outer seal removal left gouges in the engine case seal opening edges. Most of these were cleaned up using a rotary tool, but one deeper gouge into the seal housing surface lead to an immediate oil leak when the engine was restarted.

With the countershaft sprocket removed, it was easy to see that the oil was leaking out of the channel that was created by errant drilling. Removing the new seal to inspect the damaged area caused irreparable harm to the seal, so it was discarded and 2 new ones ordered in hopes that one would finally hold oil pressure once the case damage was repaired.  It wasn’t a good day at the office…

Part of the reason for being interested in an automatic is that I had ankle surgery last year, plus a flare-up of a left wrist pain that seemed to linger, so I have been looking at other 2-wheeled options that don’t necessarily require a manual clutch and a lot of rear brake action. My stepfather had both the CB400A and CB750A versions, back in the 1980s and was happy to troll around on them. The 750 proved to be a little too ungainly for him, so we backed him off to a 400, but added an “E” economy model fuel tank, which held another half gallon or so.

The first generation 400A models had some kind of factory glitch that caused the stators to fail and apparently every one built will need a new stator, according to a Honda service rep. This bike was a “wife’s bike” which had been purchased 10 years ago with about 8,000 miles on it then. After 40 years, it is difficult to know the bike’s history and if the stator has been changed or not. Fingers crossed and hope that it remains functional.

Having just done one of these bikes, I learned that re-jetting the carburetors yielded benefits to overcome their inherent lean conditions, built in at the factory in order to pass emission controls. New carb kits with the standard CB400T jetting were ordered and installed to improve drivability and performance.

It wasn’t a happy thought, but it became obvious that the engine had to come out for new seal installation. The wraparound exhaust system had headers that came out with some nudging, but the rear separate mufflers seemed to be unwilling to loosen for removal. Eventually, the rear brake pedal linkages was removed at the rear wheel, allowing the pedal to move downwards sufficiently to create space for the power chamber/mufflers to be slipped out of the chassis.

A floor jack was placed beneath the motor and it slid down and pirouetted out onto a waiting plastic tub, which was meant to contain the oil drooling from the internals, as the disassembly continued. The torque converter side covers were removed along with the other hardware for the shift linkage, while the rotor and stator mounting plate was pulled from the opposite side.

The cases seemed to be very reluctant to part with a few screwdrivers wedged in between the outer edges until the overlooked 6mm (by 105mm) bolt was discovered to have been hiding under some grease. Loosening the bolt without taking the wedges out resulted in a loud BANG; with the bottom engine case jumping up and the remaining bolt shearing off at the threads in the upper case.  I went online to locate what appeared to be the last 6x105 flange bolt in the Honda system and ordered it immediately.  Man, these “senior moments” can take a toll sometimes, but it could have been worse.

The engine internals were quite clean, but the transmission shaft seal shoulder was nicked from the previous seal replacement attempts. Another trip to eBay came up with a complete transmission for $20, plus $15 shipping! New seals from 4into1.com came in along with a gasket kit. Somehow, all the jacking of the big engine case hadn’t damaged the sealing edges, so with new engine seals installed in place, the lower case half was reattached successfully.

While waiting for incoming parts, the carbs were unhooked from their cables and new CB400T kit jets were installed, hopefully, to give the engine a bit more fuel to compensate for the alcohol in the gasoline which tends to lean older engines out. Main jets were moved up to 110 from 105 and the primary mains changed from 72 to 75. These bikes were notorious for being cold-blooded due to EPA requirements which were just coming into play during the mid-1970s.
Eventually, all the parts were received and the engine reinstalled into the chassis. The bottom of the engine doesn’t have much of a large flat pad to use for lifting by a jack, but a combination of tools, lifting back and forth, plus the hydraulic assist eventually got the big lump back into the frame successfully.

The engine fired back up without the troublesome oil leaks at the counter-shaft, which was a great relief. One of the carb mods backfired on me, as the shim beneath the needle locked it into the slide which subsequently seized up partially when running.  Removing the shims freed up the slides correctly and the engine performance improved back to normal, once again.

Returning from a long Sunday drive resulted in a horrifying sight of oil drooling off the engine, once again, but the cause turned out to be a little too much oil in the crankcase, plus I forgot to reconnect the breather tube back to the valve cover after the last carb removal session! Senior moments, indeed!
Subsequent testing did not reveal any further major issues, although some black oil was coming off the countershaft area, which turned out to be old chain lube which had been superheated by the 25-mile freeway run and flung off the chain onto the engine case cavity. A quick recheck beneath the left side cover showed no signs of fresh engine oil to be present, so I think the case can be closed now. Whew!

Riding these bikes is a lesson in relearning how to ride a bike without the usual engine compression braking when throttling down in gear. The bike feels like it is coasting when not under power, which it is with the torque converter functioning as they normally do.  If you aren’t in a hurry, the bike can be left in “2” and just throttled off a stop like a scooter. There is more oomph if you start in “1” but it tops out at 50 mph. Top speed doesn’t seem to be more than about 80 mph on the flats or downhill. Pulling the new spark plugs for a mixture reading showed very white electrodes, so a little more jetting might be helpful to increase performance and keep it off of detonation.  The engines are 360-degree firing, like an old Honda Dream, but have a chain-driven balancer shaft system to negate much of the vibrations normally felt in an engine of this configuration.

The Honda-matic versions of the 400T are pretty good at local commuting but feel woefully underpowered going up long grades at freeway speeds. The carburetors are 6mm smaller than those on the manual clutch models and the cam timing is configured for torque not super-high revs. The standard versions of these bikes are pretty quick for their size, however, and magazine articles praised the whole bike lineup as revolutionary and compelling overall… except for the CB400A!

Having recently sold my 2002 Honda Reflex 250 scooter, it is hard to tell the performance difference between the two machines, as the scooter was capable of 80 mph as well.  As my ankle continues to recover and the wrist problem responded well to treatment, the need for the automatic seems to be waning now, so when the title shows up, the bike will go out and find a happy home for someone who can appreciate its features, just the way it is.