With the last Tracy-bodied CB400F acquisition pretty much done (as far as I am going to take it), another low-miles, all stock, red, 1975 CB400F turned up on the local Craigslist posts, although the bike was actually in Temecula, CA. The photos looked promising and seller claimed to have had to buy 3 different exhaust systems before he could cobble together an all-OEM unit. Miles were in the 10k range, so it should be in decent shape overall, at least mechanically.

A friend, Michael, who lives up in OC, had contacted me looking for a nice vintage bike for his buddy to ride. He initially attached a 1969 CB450K2 listing from Craigslist, but it was up in Central CA. The bike looked decent enough but parts for the 450s are getting scarce on the ground and they aren’t my favorite model anyway. After imparting those thoughts, Michael sent back a link to the red 1975 CB400, which had been posted up in OC, after the one in San Diego had expired. Asking price was $4600, including a bunch of spares, including a nice fuel tank. I opined that if the price was closer to $4k, it would be a good deal, all things considered.  Next thing I know the deal was done, apparently at $4k and the bike was brought down to its new home in Mission Viejo. A day or so later, after Michael had taken it out for a test run, he sent back a message stating:

1.  Most important, it has an oil leak, that looks like from the head gasket just under were the pipe connects. Is this simple fix… do we just need to torque the head bolts?
2.       One of the 4 float bowl gas needle valves leaks
3.       The clutch slips a little when pulling high RPMs.

Unfortunately, for many of the inline Fours from the 1970s, the head gaskets tend to leak out around the o-ring seal, where the oil is channeled up from the pump through the cylinders. This is common for 350-400-500-550 and 650 Fours and not unheard of on the SOHC 750s, starting back in 1969. For a mechanic, the good news is that most all of the “small” Fours have enough room around the frame to remove the cylinder head with the engine still in the chassis.

A good webpage overview covering a restoration procedure is http://www.dotheton.com/forum/index.php?topic=59484.0

In this case, once the cylinder head is removed, then the “fun” begins…

The valves must be removed and new valve stem seals installed. The head needs to be checked for any high spots or warpage. All the valves and combustion chambers need to be de-carboned and cleaned. Camchain guides and end bumpers should be checked and replaced if needed. All the cylinder head hardware and fasteners must be cleaned and inspected before reuse. Securing the cylinders to the crankcase before any engine rotation has begun can prevent the necessity of pulling the cylinders and scraping off a LOT of factory gasket material from the base of the cylinders and the upper crankcase. Once the cylinders break the gasket bond between the cylinder base and crankcase, you are in for another couple of hours of labor.

After shedding the exhaust system, before mounting the bike on my bike work rack, the rest of the task is just a slow and easy disassembly of the top end components. ONE of the 8mm cylinder head nuts, which are one of two that are exposed to the elements, needed a fork tube slid over the end of my 3/8ths drive ratchet in order to break it loose. When the top cam cover/cylinder head cover was lifted off, I could see remnants of a previous attempt to seal up the cover to the head using some liquid gasket material, instead of just replacing the elongated o-ring packing.

The cam and rocker arms all looked well lubricated, but the tensioner blade on the back was getting some ridges in the face, so was changed.  The valves were taken out one cylinder at a time, de-carboned and the stem seals changed on the inlet side. The gasket kit came with 8 seals, so apparently these early engines only had seals on the inlet side. Checking current parts lists show a different exhaust valve guide part number, which can accept a stem seal, but the cylinder head part number was a 377-000, the original part number to the bike, which takes only 4 seals on the inlet sides.
There was a build-up of soft carbon on the back sides of the intake valves, indicating worn stem seals. Soft carbon deposits covered the combustion chambers and tops of the piston crowns, but the color on the exhaust valves seemed to indicate pretty good burning even with stock jets. 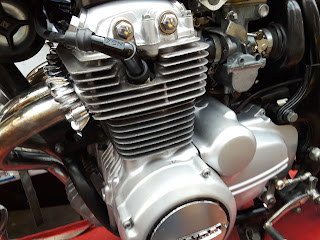 The whole intake system was intact with all the proper clamps and components in place, indicating that the carb rack might never have been off the bike. The carbs came apart without drama and all of the o-rings that seal the main jets and float valves showed definite signs of age. New carb kits were ordered from my friends at 4into1.com, along with a couple of sets of over-sized jets, fork seals, spark plug caps and other repair items needed for the bike. The owner supplied a gasket kit, but it was one of the Athena aftermarket kits, not a more desired OEM Honda kit. Hopefully, the head gasket will withstand the heat and pressure of the engine for the immediate future.

The bike apparently lived much of its life in Wisconsin or somewhere in the Mid-West and there was a general sprinkling of corrosion on the chrome and alloy parts that was consistent with its early days outside of California. Michael wanted the outer engine covers repainted, as they showed signs of corrosion that had worked beneath the original coatings. After the generator side cover was removed, I was surprised to see signs of the rotor rubbing on the inside of the field coil and a bit on the outside too. Given the fixed nature of these components, which never should contact each other, one must assume that the bike was crashed down on the left side and the case deformed enough to allow contact between the rotor and field coil. When the cover was stripped of all the components, it was clear that the cover had been impacted enough to deform the outer edges of the cover casting. This could be a used cover that was installed after the original crash had occurred. 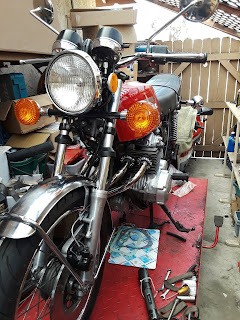 I have been raiding the leftover parts of my friend Scott, who restored a couple of CB400Fs back about 10 years ago. Of all the odd parts that he still had was one NOS CB350-400F rotor! I made a quick 22 mile round-trip on my newly-acquired 2002 Honda Reflex scooter and brought back the prize for installation. The engine was spun over to check for any deformity on the end of the crankshaft, but the rotor runs true with no wobble or run-out.  The dented area of the cover was worked a bit with a big brass drift and checked for any uneven heights of the screw standoffs.  The field coil checked in with 4.5 ohms and the stator windings were all connected to each other, but not to ground, so it should all work well, once the components are all reinstalled. I did notice a different flange nut holding the rectifier onto the frame and closer inspection revealed that the bracket had been re-welded at some point in time.

Checking the forks for weeping seals, it appeared that they had been replaced at least once before and they didn’t seem to be wet when the dust boots were pried up for inspection. What did show up were some fine wear lines on the fork tubes, equal on both sides.  A bit of test riding will be needed to confirm any leaks, but it may not be the fault of the seals in this case.

Michael reported an oil leak beneath the engine on the right side, as well. Apparently the galley plug cap was leaking slightly past the o-ring, so that will be addressed when the clutch cover, on the same side is removed for the clutch inspection and necessary repairs. Later a second galley plug, just behind the oil filter housing was also weeping some oil passed the o-ring. Both were replaced with the desired results.

The clutch cover was removed and the clutch disassembled to check for signs of slipping. I have never had a CB400F that slipped its clutch, even during racing conditions, so wasn’t surprised to find no signs of wear or slipping on the plate sets. The bike came with a complete set of plates and springs, so they were installed anyway. The springs were an optional 323 code spring from the CB500 Fours, so the clutch lever has a bit more tension when disengaging the clutch now. The cover was cleaned and painted, along with installation of a new kickstarter shaft seal.

A new set of exhaust flanges were available from 4into1.com so for a reasonable price, the exhaust system got a bit of extra bling. The exhaust collars had been painted over the old rust, so were stripped again for another coat of high-temperature engine silver.

The carbs were setup with #78 main jets, instead of the stock #75 sized jets, in order to compensate for the alcohol-based fuels we have to use in SoCal. The bike pulled strongly through the gears, once the engine was running again, but the plugs came out on the white side, so a bump up in the jetting to #80s might be in order. Speaking of spark plugs… the original plug caps all showed between 9 and 10k ohms, which is out of spec for resistor caps, which are set at 5k ohms of resistance.

The last stop in this journey was to re-seal the spare fuel tank that came with the bike deal. The tank was straight and the paint in decent condition, but a thin coating of surface rust was seen and felt in the roof of the fuel tank. A flush with phosphoric acid, followed by a rinse and dry preceded the installation of the 2-part Caswell epoxy sealer. A new OEM fuel filter kit was installed after the petcock was disassembled and cleaned.

Riding the bike is a bit of a time travel, as it is about as stock a bike as I have ridden for quite awhile. I bought one new in 1975 and have the muscle memory of that bike still ingrained in my psyche. There is still a bit of a lean stumble at part-throttle, consistent with just about every 350-400 Four that I have ridden, but once it clears that little glitch the engine winds out cleanly and with a pleasant roar from the intake and exhaust muffler. The single piston brake requires a strong pull to haul the bike down from speed, with an assist from the rear drum stopper. They are pleasant bikes with classic café styling that has aged well over the past 44 years.

Wrapping up this revival project would seem to end the 2x2 of the same bike combos that keep coming my way. Next up, not one but at least 2 CB72-77 engines for rebuilding…. One is very “stuck.”
Bill “MrHonda” Silver