My first Honda CB400F was purchased new, in 1975, when they first were made available at dealerships.  Apparently there were a few issues with the cylinder castings, as mine started leaking oil in the middle of the cylinder block, between the fins. So, it went back to the dealer for a new cylinder block and it seemed to be fine after that. I had been doing some roadracing with CB125s, but thought I would try the CB400F out in what was a new racing category, called “Box Stock.” You were only allowed to change the tires and rear shocks in this class and had to have working lights and full charging system components.

I discovered that these bikes were over-geared from the factory, so the first thing to do was to find a front drive sprocket that had one less tooth. This geared the bike down so it would pull redline in top gear more easily. I figured that much of the 350-400cc class competition, which consisted mostly of 2 stroke twins and triples would have had non-stock port jobs to boost their horsepower. Fortunately, Yoshimura Racing had been offering a nice bolt-in “road and track” camshaft, that helps build some power at the top end and give another 1,000 rpms to boot. You have to re-jet the carburetors and leave the valve clearances a bit looser, but otherwise the engine was pretty street-able overall. My competitors were somewhat surprised at my top 5 finishes in the first couple of races, but because I didn’t win, no one protested me. At one race, another stock CB400F showed up, but was woefully slow due to stock gearing and engine specs and they wondered why mine was so much faster…
My last race with the bike was at Ontario Motor Speedway, in Los Angeles. During the race, I tucked into the draft of a RD350, which was doing about 100mph on the straightaway. I pulled out of the draft with the engine hitting redline in 5th gear, I pulled out of the draft and then shifted into 6th at 100+mph. Top speed seemed to be about 105mph with that setup, so I pulled away from him and finished again in the top five results. I definitely got “stink eye“ when I returned to the pits though. As I coasted back to my spot, the Yamaha rider mumbled something like, “I’m not so sure that thing is stock.” The next week, I pulled the cam back out and sold the bike to my brother, who kept it for about 10 years, putting 40k miles on it without issue.

Since then, I have owned more than a dozen of these little jewels, including a 458cc-kitted bike that I crashed on, back at OMS in 1980 ending my racing hobby for good. I bought bikes from here and there, around San Diego and sold more than a few of them to exporters, who were shipping them back to Japan, where there was a great demand for the US models. The last two bikes I had came from Phoenix, AZ and one had been nicely restored. I sold it to a young guy who answered my Craigslist posting and said he was going to fly in and ride it back home…. to New York City! He made it back with no problems, giving the fresh motor a good hard break-in period.
These bikes do have their quirks and can’t really compete performance-wise with the likes of a KH400, RD400 twin or a Suzuki 380 triple. The engine was based upon the lackluster CB350F, which was slower than the CB350 twins of the days. To build the CB400F, Honda bored the 350 engine out to 408cc and then added a 6th gear to the transmission. Both engines shared the same carburetor rack and camshafts. The finishing touch for the CB400F was the iconic 4 into 1 exhaust system, which gave the bike such a sporting look. The downside of the exhaust system was that the header pipes were all of a different length, so the horsepower peaks were softened by uneven power pulses being reflected back from various length tubes.  These engines really perk up with a nicely-designed header system with equal length pipes. The Kaz Yoshima pipe added 1,000 rpms and a couple of horsepower when installed in a stock or modified machine. 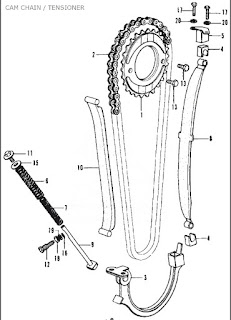 The other critical maintenance problem is the actual camchain tensioner bolt. Normally, you loosen the bolt, which allows the spring-loaded tensioner rod to push up gently against the tensioner blade, taking up the slack in the camchain. The bolt is only 6mm and has a machined “waist” in the middle to allow for installation of an o-ring to seal the bolt against the engine case threads. It doesn’t take very much force to snap the bolt off at the o-ring slot and then you have BIG PROBLEMS! I have tried to remove the broken bolt off with an EZ out, but they often break off inside the broken bolt piece, making the problem MUCH WORSE. I have also drilled out the broken bolts and drilled/tapped the hole for an 8mm bolt and a matching alloy crush washer to seal up the threads. The worst one I encountered wound up with me splitting the bottom engine cases and having a machine shop use an EDM machine to burn out the old bolt, allowing installation of a new stock bolt once again. Honda seems to have changed the design to a 286 (CB250-305 twin) part which doesn’t have the o-ring groove now, which should lessen the broken bolt issues of the past.

So, these are some critical issues that needs to be checked when you are looking to purchase a 350-400F Honda four.  Because of today’s diluted gasoline, I have found that vintage Hondas often require some bigger main jets to help offset the alcohol in the gasoline. The cross-country CB400F had #80 main jets in place of the stock #75 mains, even with a stock air box and muffler system. That bike ran smoothly and with good power at sustained speeds of 80+ mph for hours on end. Changing the intake or exhaust system nearly always requires carburetor calibrations different than stock settings.

The latest find….
Despite having my right ankle bound up in a cast/boot for 4 months after ankle fusion surgery, I continue to keep my eyes open for something interesting, like a CB400F. The prices of pure-stock CB400Fs have jumped in recent years, as supplies run low and parts become extinct. My non-related friend David Silver has had numerous CB400F parts remanufactured to fulfill all of his restoration bikes, which have become a staple in his business model.

A daily email, from the “Bike-urious” website, lead with a “1975 Honda CB450” with a “one of three” Tracy body kits and custom paint job. The bike listed only had 6,000 miles showing on the correct 1975-only 130 mph odometer. The bodywork was sleek and gave the bike a whole new character. The stock exhaust had been ditched for a Kerker system and the tiny stock headlight had been swapped out for an 8” searchlight beam. The engine was painted black to match the bodywork, perhaps, but nothing was known about whether the engine had been modified or not. The seller had gotten it from an ex-Tracy employee, who had stored it since the 1980s. The current owner, named Brian, resides in a quaint town in No. Cal., with a population of about 500. He is a 30-something guy who claimed to love restoring vintage cars and bikes from time to time. I was able to reach him and have a long talk about the bike and my history with the CB400F models, so we struck a deal and I made arrangements to have it hauled to Spring Valley from 750 miles away.

The bike was missing the center console indicator light panel cover and the centerstand. Fortunately, the warning light panels have been reproduced, as they fit 400-500-550 and 750 models. “Z-1 parts,” up in Oceanside, CA set me up with a killer deal on one, but they can be found at www.davidsilverspares.com and several other sites and cost about $60. A quick check on eBay turned up a decent centerstand and pivot bolt for $35. The spring and spring hook wound up coming from the UK, where the hooks were custom cut from stainless steel.

Brian had sent a video of the bike running up and down the road, so I knew it ran and didn’t seem to smoke or have running issues. The bike has K&N pod filters in addition to the period original Kerker 4into1 exhaust pipe, so one hoped that the carburetors had some adjustments made when the bike was built. 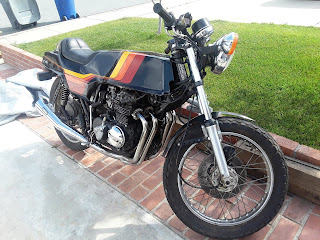