The JDMs in my life…

In more than 50 years of Honda motorcycle ownership, bikes of all sizes and histories have come my way, with the bulk of them “normal” US-spec models. I have owned more than a few JDM (Japanese Domestic Market) Hondas, which have mostly just showed up unexpectedly. It is an interesting mix, starting with the oldest ones… a 1954 90cc J model Benly and an F Cub, the Honda 2-stroke powered bicycle and they just kept coming…

I turned up the J Benly at a local salvage yard, which was sitting for many years before I extricated it, more out of curiosity than anything. It was rough, but mostly there, but the kickstarter cover had been split and re-welded once. I disassembled the engine just to see what was inside and did a valve job on the cylinder head, using a CB750 valve guide. 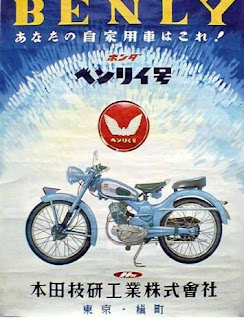 Ownership of this bike actually started my involvement with the VJMC, as I was trying to contact others who knew anything about this model at all. I sold the bike, locally, to a friend who sold it to Brian Slark (Barber museum wrangler) and it wound up in St. Louis for a number of years. Mike Buttinger contacted me looking for an “old Honda” and I put them together. The bike was shipped to the UK where it underwent a 100% stunning restoration, subsequently winning a “Best of Show” award at Staffordshire. I did, briefly, own a JC58 Benly, back in the 1990s, but sold it off before it was running again.

The “F Cub” might have actually been older, perhaps a 1952-3 edition, which I purchased off of eBay right after I moved to Hawaii! The bike was shipped in a bicycle box and arrived safely, from many thousands of miles away. It was a fascinating look into Honda’s first in-house engine building efforts, but wasn’t going to be practical for the Islands, so it was re-sold on eBay to someone in TX, who flipped it again, not too long afterwards.

My first ever motorcycle was perhaps a version of a JDM, probably from Okinawa. It was a 1967 Honda CL90 Scrambler. It was brought into the country by a local sailor, I think and traded in for a car at a used car lot. It was definitely the only one in town, as even the local Honda dealer had no idea of its existence. They were released in the US a few months later. That bike is the one that I drove 1500 miles in 3 days, going from San Diego to Reno, NV, to SFO and then back to LA, getting 100 mpg all the way.

The only JDM that I went to fetch in Japan, was an early SS50 Sports 50, featuring a 5-speed gearbox connected to a 11,000 rpm motor. That bike went 60 mph right out of the box. I was in the USAF and flew from my base in Sacramento to Yokota AFB in Japan, visiting Curly’s Honda, just outside the base entrance. I picked out a cute red SS50, paid $175 for it and was told to come back later. Upon my return, I found the bike had been turned into a neat pile of perfectly wrapped parts, suitable for shipment back on the C135 jet plane, as I returned back to Sacto, via Fairbanks AK.

After my stint in the USAF, I returned to San Diego and bought/sold a lot of Honda bikes. In the late 1970s, I happened to be in the UK, when Honda released the 1977 CB125T twin to the local market. I had been roadracing on and off since 1974, in the 125 Production class, so thought that this bike would be more competitive than my series of CB 125S models, which were all that was available in the US. The CB125T was another out-of-the-box terror… 80mph at 12k rpms in totally stock condition. The bike was raced successfully at several tracks, including Ontario Motor Speedway where it hit 88 mph at 13k rpms drafting a 175cc class bike.

I went back to the UK a few years later and discovered the new 1980 CB250RS street bike, based upon an XL250 chassis/engine, but with alloy rims, disc front brake, improved engine and a tiny quarter fairing. That bike would run up to about 90 mph and got 90 mpg at the Craig Vetter Gas Mileage run in 1980. I sold the bike to buy a new VF750F Interceptor. About 30 years later, the same CB250RS showed up on Craigslist, here in San Diego.  It had about 28k miles on it and was still owned by the same woman who bought it in 1983. It needed waking up, but it ran fine after a bit of work. The engine had never been opened up, wasn’t using oil and didn’t leak.

A rare CBM72 250cc Super Hawk (Type 2 engine with 360 crankshaft) showed up on a local Cycle Trader listing in the mid-1980s, which was the first of that type I had ever seen. I also pieced together a Type 2 CB77 domestic bike, during that time which had a lot of CYB racing parts installed on the chassis. I sold that bike in 1988 and wound up buying it back from the estate of the owner in 2017.

In the late 1990s I came across a CP450 for sale in the Mid-West. Apart from an oversized windshield and a dual seat, the bike had most of the CP parts still on it. I was able to purchase it and have my local wholesale friends grab it for me and haul it back to San Clemente, where I lived from 1996-2001. I was able to buy a NOS solo seat and rear rack directly from Honda. There were only 25 of the all-white 4-speed Black Bomber models brought into the country and Honda did inventory parts for them.

Through a rather complicated purchase and swap, I did wind up with a rare CYP77 Honda 305 Police bike, all in bits. They were never offered in the US (some CP450s came over in 1965), but a few were sprinkled around in Canada, which is where this particular bike was sourced. I found an ad, somewhere on the Internet, I think, where two were being offered. I gave the information to a friend in TX, who was seeking a project like that and a year or so later, the first one was finished to perfection. Enough parts had been rounded up to do the second one, but his enthusiasm waned. After sharing photos of the first one, I asked about bike #2 and he offered it up for trade wanting a CB92 project instead of cash.

I had just moved to New Mexico, but had been in contact with a man who had an unidentified “Benly” out in the desert that he wanted to sell cheaply. It turned out to be a CB92 with a unfinished CB160 engine wedged into the chassis. The bike came with the original engine, YB racing parts for the Benly and a YB seat for a CB77, too. I had to make a 1400 mile round trip over the weekend to fetch it all and return to NM. On Thanksgiving Day weekend, my friend drove up from Houston with the CYP77 and a running 1967 CB77 to swap for the CB92 project. I built the CYP77 in about 3 months and then sold it to CMSNL in Holland, prior to moving to Hawaii in 2002.

In 2017, an avalanche of JDM bikes came to me in convoluted ways… First a CB77-styled domestic CB350 went up for sale in PA, but the bike had been partially restored by a friend in NoCal, a few years earlier. I bought the bike and had it shipped here in SoCal, where I brought it back to life, but discovered numerous issues that needed a lot of TLC. At the same time, a 1997 Honda Dream 50 street bike came on the market, in Indiana, from a good friend and enthusiast, who had a lot of experience with Honda 350 twins and we wound up swapping bikes back and forth to the Mid-West. The domestic CB350 had gone from N. Cal to PA to CA and back to IN, in the space of a year.

In the meantime, the man who transported the domestic CB350 to me also had brought in 24 JDM-UK bikes from England, earlier in the year, including a 1988 CBR250R 250-four cylinder bike, which has a redline at 18k rpms. On the way back to CA, while bringing in the 350, he picked up the 250-4 from his warehouse in Oakland and brought both bikes down to me. The CBR250R was a little bit rough, but ran well and was great fun to drive. I had just gotten it registered in CA when ANOTHER 1988 CBR250 showed up on eBay auctions. The bike had been brought in from Japan by a dealer in Utah. That bike only had 310km on it… about 185 original miles and had been serviced and titled in UT. The first CBR250 was sold to an enthusiast in LA and the “new” bike remains with me today with about 1200 miles on it now. 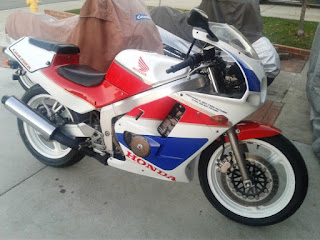 This interest in more modern JDM models lead me to bid on a 1989 Honda NC30, which is the 400cc V-4 version of the fabled RC30 750ss Sport bikes, which are now fetching $25-50k. I didn’t realize it, but the seller was the same guy I bought the first CBR250 from! It took him a few weeks to bring the bike out to SoCal and unfortunately there were numerous problems that were not disclosed in the auction, including having the original carburetors replaced by some “parts bike” carbs of a different series that had damage and missing parts. The fork seal on one side was leaking a lot and the bike tried to bend a rod by trying to compress a cylinder full of raw gasoline that had leaked into the cylinder through the vacuum hose attached to the vacuum operated petcock.

A new OEM Honda petcock diaphragm kit fixed the tank problem and I learned to turn the engine backwards to purge out the gasoline back into the exhaust system. I’m not sure why it didn’t catch fire and/or blow up once the cylinder was cleared and the engine fired up for the first time. I did get one ride in on the bike for about 75 miles before tearing into it, in an effort to salvage the carburetors. With 60+ horsepower and wet weight of about 400 lbs, the bike is quite entertaining to ride, once it clears its throat. I am hoping for good things from it, but it is going to take a lot more time and $$ to get it close to right again. I actually sold it on eBay to a guy in Hawaii, so the bike resides over there now.

I think that this will be the last of the JDM Hondas to come my way, but as you know, life is just FULL of surprises.
Bill Silver