I have worked on a couple of CB650s, over the past few years, but can’t say that I have ever owned one until this February! I was watching a poor bike languishing in the Craigslist postings for about 10 days feeling sorry for its lack of care. The seller only posted one photo from about 30 feet away, so you really can’t see how good/bad it really is. The meager text in the posting mentions that the bike only had 4,000 original miles on the clocks and needed “carb cleaning” and some general TLC. This bike comes under the definition of “barn find,” which can lead to a “learning experience” or send you to a financial “black hole” of unexpected work and parts purchases. 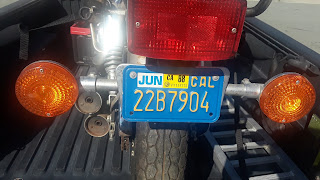 The CB650s were the last of the generation of mid-sized Honda Fours, which began as the CB500 Four, then got a big bore increase to 550cc. Honda stroked the engine out to about 627cc, which Honda rounded off to 650cc, as a model descriptor. By 1981, the engine was rated at 63 horsepower (up from the original 59 horsepower in 1979), not too much shy of the original CB750s 67 horsepower rating, however in a much lighter chassis, weighing in at around 480 lbs. Honda made numerous changes to the machine through the years of 1979-82. The stock slide-type carburetors were replaced with larger 31mm CV carburetors in 1981. The CB650 Custom had new forks, double-disc brakes up front, Comstar wheels, 4 into 4 mufflers and pull-back handlebars. Quarter mile times were 13.6 seconds at 95 mph.

After a 1-hour drive to North San Diego County, I was able to have a close-up look at the poor, neglected Honda 650 Custom. The last registration tags were from 1988 and supposedly the carburetors had been cleaned at some unspecified point in time. The first thing I noticed that the coil wires had been replaced with some very LONG wires and that the 1-4 coil leads were connected to 1-3 cylinders, while the 2-3 cylinder coils were connected to 2-4 cylinders. The battery had been charged up enough to hear the engine crank over, but it gave no signs of trying to start up on its own.

The front brake master cylinder plunger was stuck all the way IN, so there was no way to pump up any pressure to the front brakes. Removing the gas cap revealed that someone had sloshed some KREEM tank sealer inside and some of it had anchored the internal fuel filter in place. The gas cap latching function was sluggish and appeared to be both corroded and perhaps plugged up with some tank sealer residues. 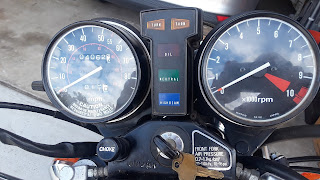 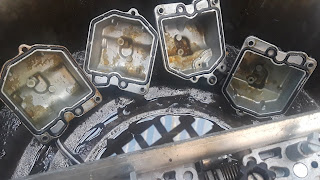 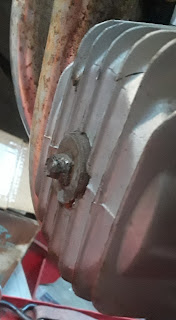 The tires were the original Dunlop Qualifiers, with expected weather checking and dry rot on the sidewalls. Tire tread did help to verify that the bike only had the 4k miles showing on the odometer. The right side mirror and some scuff marks and the fuel tank had a dent along the top right edge. With more than a little reluctance, I decided to adopt the poor machine and do what I could to bring it back to life without breaking the bank account. The sale price was $700, which gave me some breathing room as far as procuring necessary parts, but was probably a more than generous offer.

As expected, the carburetors were filled with a jelly-like substance and all of the float valve needles were stuck in the seats. All four slides were stuck in the bores and the accelerator pump plunger was stiff and non-pliable. Carbs were disassembled and bathed in an ultrasonic cleaner for several rounds. My friends at 4into1.com provided me with new tires, carb kits, cables, a master cylinder kit, spark plugs and oil filter bolt/filter/oil for an oil change. Ebay sellers came up with specific O-rings for the oil galley plugs and a good used speedometer/tachometer mount plate to replace the one which had a sheared-off mounting stud.

I found some Metal Rescue gel products at the local auto parts stores, which can be applied with a brush. Let it stand for a few hours and then rinse off and you have much better-looking chrome parts!

The drawback on the 1980s CV carburetors is that the idle jets are pressed-in and not replaceable. This makes a thorough cleaning just about impossible. I know that those who do carburetor overhauls professionally have a method of extracting the jets using a tap to catch some threads on the outside edge of the jets, then somehow being able to pull them out from the carburetor body intact. If you break off the tap or the end of the jet, then it’s “game over” for that carburetor.

After rebuilding the master cylinder, I discovered that the fluid lines were clogged with ancient brake fluid residues. So far, I have been able to push a piece of stainless steel safety wire down the banjo fitting for a few inches, which seems to be where the clogs reside. A combination of the wire and some brake cleaner shot down the fitting managed to open the passageway and allow fluid pressure to flush the lines out down to the calipers. The caliper seals were replaced, after the pistons were finally pumped out with the master cylinder pressure. Bleeding the dual brake lines can be challenging, but eventually the air was expelled and a firm brake lever returned to restore normal brake function. 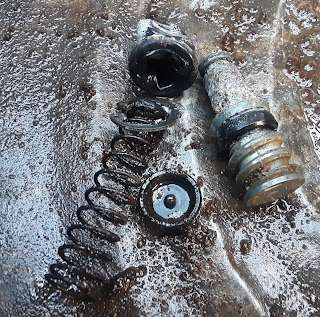 Initially, once the carbs were back on the engine, the #4 carburetor didn’t seem to be flowing fuel at idle. The exhaust pipe was cold after the engine had run for a few minutes at idle. Raising the engine speed up towards 3-4k allowed the cylinder to begin firing again, causing the engine performance to become uneven as the cylinder cut in and out on the first test drive. A follow-up check of the #4 carburetor’s float bowl and carb top allowed me to poke a slender, tapered jet reamer up inside the idle jet orifice to perhaps clear a blockage in the jet hole. I’m not sure if the carburetor slide spring might not have been tangled up in the return spring, but after everything was reassembled, the engine smoothed out and the engine performance began to sound more normal once again.

The engine sounded a bit noisy in the top end, so all the valve clearances were checked and found to be at specifications. The camchain tensioner needed adjusting, which is accomplished by loosening the lower tensioner cap nut while the engine is idling. A few turns out on the nut and the noise disappeared much to my surprise.

The original drive chain was rusty and corroded, so a replacement chain is one of the last items on the replacement list. Speaking of parts involved, as mentioned above, the list came out something like this:
Spark plugs, oil/filter and new oil filter bolt, master cylinder kit, caliper seals, top end gasket kit, carburetor repair kits, plus #125 main jets (replacing the stock #120s). New throttle cables and a new choke cable, plus a new $30 petcock screen set. The knob for the Hi-Low beam switch had been knocked off, so a good used eBay switch assembly was obtained for $20. New tires were mounted and balanced by my friends at National City Motorcycles. So, you can see that even if you get a bike like this for free, the parts required, plus a LOT of labor, makes reviving a “barn-find” bike into a bit of an ordeal, requiring a substantial investment in time and parts. 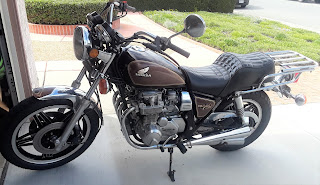 There is still plenty of de-rusting to do on the chrome parts that have sat collecting dust and rust for most of the past 32 years or so. From its sale in Denver, CO to time in Arkansas, before coming to CA in 1986, the bike has covered more miles in transport than on it’s wheels being driven normally. The factory o-ring drive chain was replaced with a solid-roller DID chain. Despite it’s rather dreary cosmetics, the bike is mechanically pretty sound now. The initial investment cost has doubled since purchase, but it is now fully street-legal in California now and ready for service and new adventures in SoCal.