You really never know what you are getting at motorcycle auctions unless there are details specific to the history and current running state in the auction highlights. Usually, there is nothing like that available to prospective buyers/bidders. You get a couple of photos and a couple of lines about what it is and from what “collection” that it came from and that’s about all. 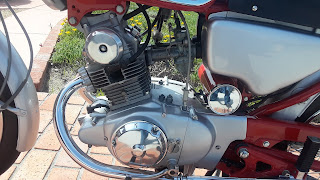 Case in point: I bid and won a 1967 CB125SS bike at a recent Mecum auction, which carried scant information about what it was and where it came from. These bikes appeared to be solely Japanese Domestic Models and few have survived after 53 years, much less having been lovingly restored in the Mid-West a few years back. These bikes originally came in various metallic Candy colors, rather than Honda’s usual black/white/red/blue options, that were the mainstay of the color palette of the early 1960s. This one was painted a traditional Scarlet Red, the color that you would have seen on a CB77 Super Hawk or S90 or CB160 back then. So, “points off” for non-original paint color. That said, it looks wonderful in this color, mimicking a CB160 in size and overall configuration. 1967 was a cut-off period for the 160s and newly designed CB175K0 and this CB125SS were transition models between the old “toaster tank” models and the chrome-fendered two-tone paint schemes commonly seen on 1968-on CB175 and CB350 twins. Despite numerous visual similarities to the earlier CB125-160 models, the only parts in common were the knee pads and rear mudflap/bracket.

I brought the bike back to San Diego in my Tacoma truck after the auction and set about to see what it would take to get it running, as obviously, it hadn’t run for a while. The battery was flat and wouldn’t take a charge and the fuel system needed some freshening up as well. This is a rare electric-start model, a feature which isn’t even shown in the period parts manuals. With fresh fuel and a new battery, the bike did fire up, sounding a bit loud, as the muffler system consisted of cut-off stock header pipes and a set of aftermarket Thailand-made slip-on mufflers. Initial test runs seemed to indicate a lot more power than recent SS125A and CL125A machines which had come my way in the past few years.

The shifting, however, was erratic and it seemed to skip gears and couldn’t find neutral easily. Off came the clutch cover to see what was going on and it was discovered that the shift drum detent arm was off to the side of the shift drum stopper plate instead of riding up on top of the notched plate. This is a very rare occurrence in my experience, but I bent the roller arm just a bit in order to help it maintain its correct location. The clutch outer plate, which has 4 pockets for the clutch springs had a big crack at the bottom of one pocket and a large chunk missing from one of the other ones. This, too, is something that is nearly unexplained and never seen previously in my 50 years of wrangling vintage Hondas. A quick trip to eBay yielded a used clutch assembly with a good pressure plate. I buttoned the whole thing up and tried it again. Low-speed trips around the neighborhood seemed to indicate that the problems had been solved successfully. 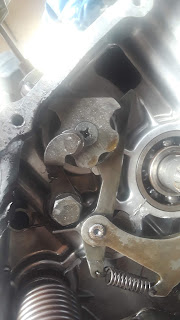 Performance-wise, the engine sounded quiet and didn’t seem to smoke out of the tailpipes, but when the compression was checked, the left side was 115 and the right side was 155! I found a somewhat tight intake valve on the left side, so loosened it up to the .002” spec and tried it again. Compression went up to about 130 and that’s all it would do. Slightly low compression is often an indication of a broken ring, scored cylinder walls, unseated rings or a mildly leaking valve.

Somehow, the bottom engine case boss, which anchors the stock mufflers, had a big chunk missing from the engine casting. When I finally tracked down OEM mufflers, the middle brackets, which are supposed to anchor to the engine case really didn’t line up to allow bolts to secure the muffler to the engine. There is a rear muffler bracket, which attaches to the frame and it holds the mufflers securely without the middle one being present. But, the combination of that fault, low compression readings and still erratic shifting when the engine was hot lead me to decide to just remove the engine and remedy everything that was going on with it. There are only 4 bolts holding the engine into the chassis, so after the mufflers are removed and a few wires and hoses disconnected, it drops down onto a small hydraulic jack and off it goes to the workbench.

The cylinder head was removed and valves tested for leakage by shooting some spray brake cleaner down the ports when the valves were closed. Nothing leaked there, so the next stop was the cylinder block. Once the cylinders removed from the engine crankcase, the cylinder bores had notable pockmarks along portions of the cylinder walls like tiny termites had been gnawing at the top of the bores. The pistons and rings were determined to be on standard bore and use of a hone revealed some light ridging at the top of the bores. Ring gaps were off at the wide end of the scale, as well. So, despite fairly tight piston and ring sets, the left side was losing compression when the rings skated over the dimples in the cylinder bore. Time for new oversized pistons and a rebore! 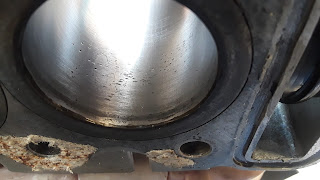 The engine had been assembled with a LOT of 3-Bond or similar liquid sealer, so every gasket surface was coated with the sealant and stuck together far more than usually found. With the clutch and oil pump removed and the stator/ignition components pulled off the left side, the engine cases could be split for inspection and replacement of the lower case. In removing the top shift drum anchor bolt, it was noted that the shift drum collar/roller was NOT present. I have run into this situation with a CB92 engine and the whole shift drum assembly was floating back and forth, selecting (or not) gears at random. One tiny roller makes all the difference in the performance of the transmission and that is what caused the detent roller to move over and drop down!

The parts arrived quickly from Oregon and I set about to see if the next generation parts would indeed fit into the earlier engine cases, which seemed virtually identical. The used eBay parts included the entire shift selection components, including shift drum, detent roller, guide pin with a spring and detent plunger and both shift forks. Everything was different than what was in my bike and fortunately, all the used upgrade parts fit into the CB engine cases perfectly. I reassembled the bottom end and sent the cylinders out to be rebored to .50 oversize. I found a whole piston, pin, ring, clips setup on eBay for $95, so with another $80 to be spent on cylinder boring, the engine will be nice and tight and ready for service. 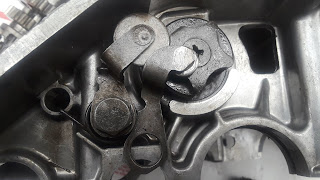 In keeping with rebuilding any old Honda engine, I spent more than one-hour scraping old gaskets and sealer material from the top-end components. Plan on some similar time to be spent on whatever engine you might be working on in the future. The OEM gaskets were made of asbestos and bond to aluminum in an unimaginable way over a 20-50 year period. This engine has been refreshed previously, but the builder appears to have used some aftermarket gasket kits. He also had used a liquid sealer on the head gasket, which adhered to the outer surfaces. When the head was removed the head gasket delaminated and there were signs of rust or corrosion that was embedded into the head gasket layers. Honda always cautioned about using non-OEM gaskets in their engines, even back in the 1960s, so this was proof-positive of their warnings.

The last remaining “issue” for the bike is that the front brake is really “grabby” when applied, especially at low speeds. I had the front wheel off previously looking for signs of rust or other corrosion that might make the brakes extra touchy, but not much was evident. It is a good-sized twin-leading shoe brake, used on the CB175s, which have 50% more power than the 125 and are capable of nearly 80 mph. I scrubbed the drum with a Scotchbrite pad and took a file to the brake shoe material, smoothing the high spots and roughing up the glazed lining faces. The DLS brakes have a connecting rod that runs between the primary and secondary shoes. I loosened the locking nut and set the shoes so they would both be contacting the drum at the same time. It appeared that the secondary shoe was hitting early from the way it was adjusted.

Once the cylinders were ready, I was able to finish up the reassembly of the engine and bolt it back up into the chassis. It fired up quickly but still seems a bit fussy at part throttle, just off idle. Compression readings are now 150-155psi now and there are no leaks at gaskets or seals, despite no using any liquid sealer, other than for the engine case halves. Honda didn’t build engines with sealers on the gasket surfaces and neither should you… 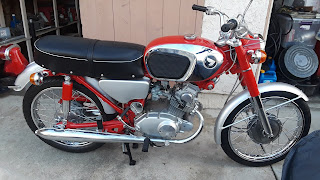