Lately, I have been nursing a somewhat one-off 1964 CL72 250cc Scrambler, for a new customer who has owned it for many years. His family owned a Honda shop in the Mid-West and this bike has stayed in the family for a long time. 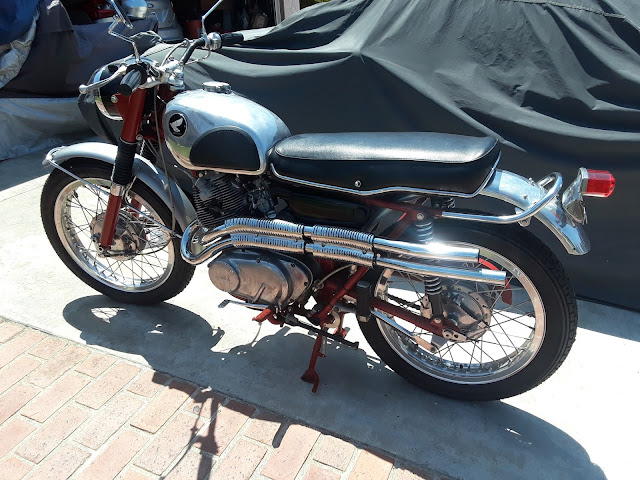 I had been contacted by the owner to “get it running” after it had been stored for a long time. It seemed like a fairly simple request, but I haven’t worked on a 250 Scrambler for quite a while and had forgotten how difficult they are to do simple maintenance on without having to disassemble half of the bike every time you need to service the carburetors.

What’s special about this bike is that it had been built with Akront alloy rims, over-sized tires and a CB72-77 cylinder head, featuring a tach drive. A later model CB77 speedometer and headlight shell were installed in place of the usual single meter setup. Additionally, the bike had been fitted with a YL72 alloy fuel tank, which was a factory-issued “racing part.” These tanks are very rare and made of an easily damage alloy, so finding ones in good condition is a rare event, 56 years after production. 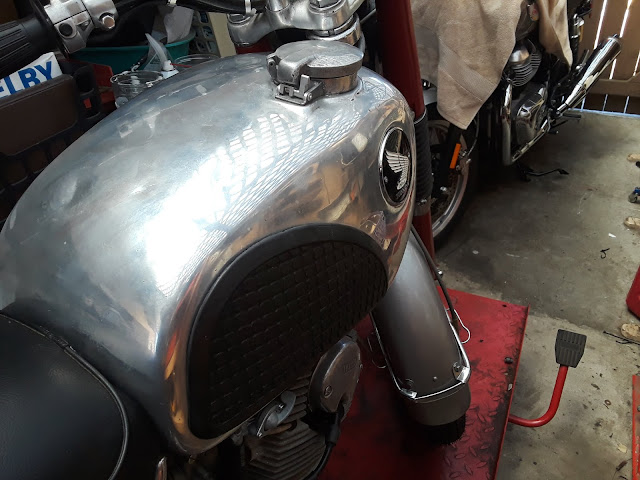 I gingerly removed the fuel tank after working off the old fuel lines and set it aside for petcock repairs. Also, the original gas cap latch for the “flip cap” filler had broken and somewhere along the line the owner’s father had contacted me about some billet ones that I have made available for the past 10 years. The problem was that the retainer pin had been removed/lost and so a beach-ball inflator had been inserted into the cap latch pin hole, as a temporary fix. Additionally, the caps had a cork gasket installed to seal the opening and the cork had broken up so a 329 code Honda gas cap gasket was installed around the central holder. The OD of the gasket was too small, so the cap leaked during driving.

When the tappet covers were removed for a valve clearance check, I was greeted with the look of alloy valve spring retainers, so I could only imagine what had been done to the engine beyond that. The clearances were close to stock .004” so I just reset them all to that, hoping that the camshaft was still a stock unit. The carburetors and air filters were removed for cleaning (filters replaced) and that gave easy access to the camchain tensioner adjustment nut/bolt. The adjuster moved in about an eighth of an inch, so you can either assume damage to the roller or just a lack of maintenance of the tensioner. 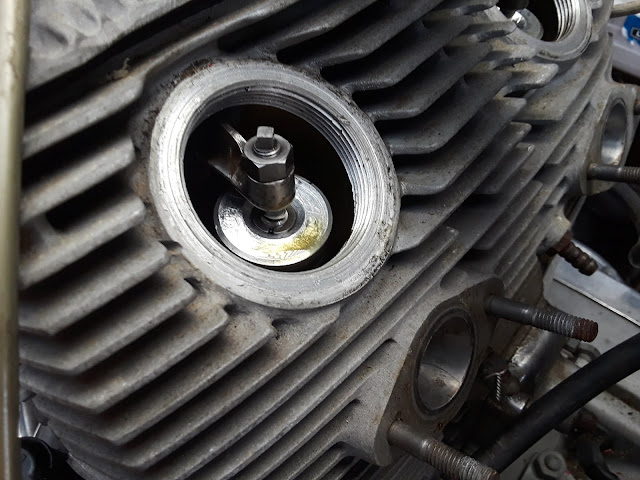 The clutch pull effort was very heavy, leading me to think that there was some kind of heavy-duty clutch installed, perhaps with the 275-810 clutch springs from the CB77s. After draining the dirty oil and removing the clutch cover, the clutch pack was removed. It was apparent that the clutch was a Barnett performance unit, including the springs. The clutch plates were stuck together and the wire retainers for the clutch hub were missing. Fortunately, the clutch plates were of the correct thickness so that the wire retainers could be installed, making for a clean clutch release action for city driving.

With the clutch cover removed, the oil filter was accessed, which proved to be packed with an eighth inch of dirt/crud. The filter was cleaned and reinstalled. This bike had the “small hole” clutch cover, which barely clears the OD of the filter, so doing a filter service with the clutch cover in place is impossible. Overall, the insides looked fairly clean, so the cover was replaced. In order to minimize the clutch pull effort, the kickstarter cover was removed for replacement of the clutch adjuster. The clutch adjusters are made of a soft material and wear down quickly, especially if not kept lubed up and when asked to work against heavy-duty clutch springs.

The carburetors were removed, disassembled and cleaned in a sonic cleaner, then reassembled with new bowl gaskets and o-rings; the rest of the parts were reused. The petcock was rebuilt with an aftermarket kit and all was put back on the bike for an initial fire-up. Well… The petcock fuel lever was pitted on the back side, so it was dressed up with a file, which took out most of the imperfections. Even after a couple of rechecks, it continued to slowly drip, drip, drip… When the carburetor fuel lines were attached, the float bowls began to weep around the forward straight edges of the bowls. This has become quite a problem for me lately. Part of the problem is that the non-OEM gaskets are a little too wide where they encounter the locating posts. The gasket channel is about 3.25mm and the gaskets are 3.5mm wide. When installed the gasket tips up against the posts and doesn’t lay flat into the channel. Installing the bowl should, theoretically, just clamp down on the gasket and flatten it into the channel. 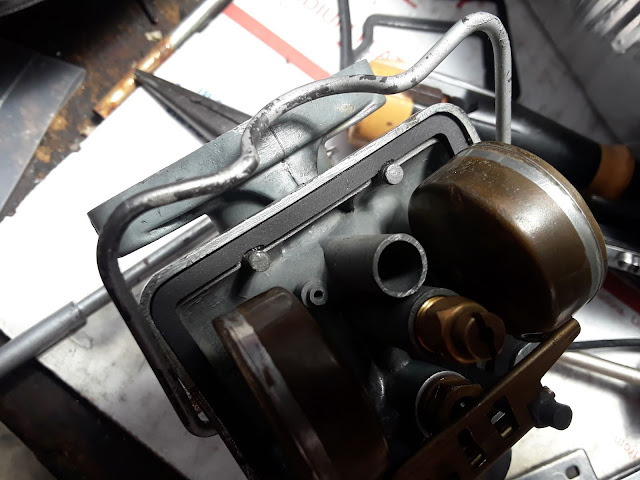 Most of the aftermarket gaskets are layered instead of solid material and it may be that the gasoline is bleeding through the material. Even rechecking the float levels several times, the bowls continued to weep a bit. I dug out a solid rubber gasket from an old kit and installed it in the left side carburetor, which seemed to have solved the problem, but I only had one to use. The bike came with a box of odd spares including a set of 1967 CB77 carb bodies. I took the bowl clip off of one of the spares and tried it on the CL72 carburetor after I had notched the gasket with a small paper punch. That seemed to work, but overnight there were signs of fuel leaking and it turned out to have a tiny crack in the overflow tube. A spare bowl was installed and that seemed to be the cure.

With everything installed, it was time for a road test. Initially, the bike fired up loudly (straight pipes with no baffles) and it seemed more or less okay. When I took off, in gear, the engine bogged down, then cleared itself after about 3k rpms. Above those engine speeds it seemed to run strong, but cracking the throttle in low gear at slow speeds repeated the bogging down feeling. Because it was jetted for 1964 fuel (no alcohol and lead added), I have generally found that the carburetors need to be jetted up to compensate for the 10% alcohol in the gas. Removing the float bowls, in order to change the main jets, set up another challenge… the float bowl gaskets fall down and absorb the alcohol in the gasoline, causing them to swell up and then they don’t fit back into the carburetor bodies! 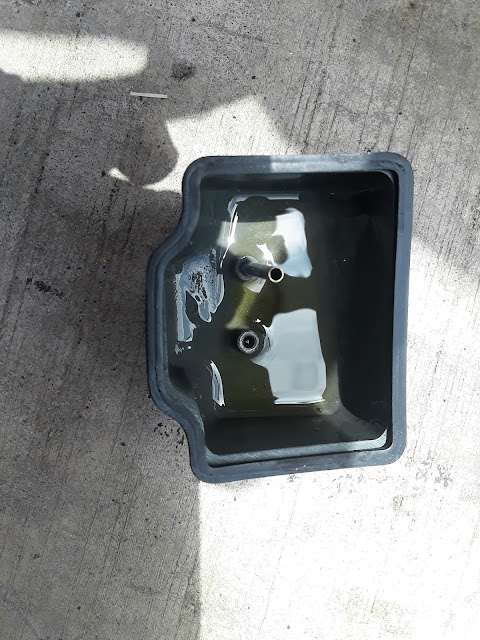 I have found that taking the gaskets out and laying them in the direct sun for an hour generally dries out the gasoline and the gaskets shrink back to size again. I reinstalled the new main jets, after I had raised the needles one notch and put it back together again. Now it wouldn’t even run on the right side cylinder! At first, there was no power to the points on that side. Removing the seat and then the tank bolt gave enough room to access the wiring connectors to the coils. One connector was snapped in, but you could feel that it was dancing around inside the connector. A squeeze with some pliers and a good push in remedied the power problem to the points. I dropped the tank back down on the mounts and tried to start the engine again… STILL not running, but on the left side now. I raised the fuel tank back up and got the bowl off from below the carbs. There is VERY LITTLE room to do carburetor work on the left side with the carbs still mounted on the engine. The float valve needle turned out to be rubber-tipped, and it jammed itself into the float valve seat, shutting off the fuel supply to the carburetor bowl.

I dug out an all-metal float needle and installed it while the carb was still attached and shrouded by the exhaust pipes and the dipstick tube. This really takes watchmaker skills to do and it doesn’t go easy if you are successful. Of course, the float bowl gasket had dropped out of the body, so that was the second step to accomplish. Eventually, everything was back in place with larger main jets and needles raised up. The result was pretty much the same as before. It still has a big bog off-idle, then clears up and runs well at high rpms. Pulling the choke on when it was struggling just made it worse, so apparently, we have to go the other way with the needles and see if that helps, even though it is counter-intuitive to what is generally found when jetting vintage Hondas.

Potential factors in why it is running the way that it does are: Straight pipes with no baffles installed. The pressure waves from the long pipes may be out of synch with the carburetor calibrations causing an over-rich condition. Secondly, if the cam was changed, along with the valve springs/retainers, the cam timing may be causing low-speed running issues and/or both factors could be at play.

The throttle cable on the bike was very old and coming apart at the ends. I decided to stop playing with it until a new cable comes in and then I can drop the needles back down at the same time. Other tasks done on the bike included painting the aftermarket chain guard and making repairs to the gas cap.

The bike barely stood on its centerstand because there as an ancient 4.00x19” tire mounted on the back and a 3.50x19 tire on the front wheel. Several hundred dollars later, a stock-sized set of Metzler tires were mounted up, but the bike is still a little unstable on the centerstand because the aftermarket rear shocks are about 1/4” longer than stock.

Much of the wiring harness was replaced, previously. The neutral light bulb was broken when inspected, but a new one didn’t light up apparently due to a neutral switch malfunction, which is located beneath the kickstarter cover. In order to remove the clutch cover or kickstarter cover, the footpegs must be unbolted from the bottom of the frame. There are few straightforward repairs or adjustments that can be made on a 250-305 Scrambler, without having to remove 3-4 associated parts in order to gain access to what you wanted to do in the first place.

Of all the 250-305 models, I have found the Scramblers to be the hardest to work on and the least satisfying to ride once you finally get them going properly. Because of the closed-loop frame and the exhaust system bolted to the side of the chassis, the amount of vibration becomes excessive and fatiguing, at least to me. For the die-hards who think that Scramblers look cool and sound cool, they can have their say, but they will not sway my opinion of them in the least. Give me a nice Super Hawk any day! 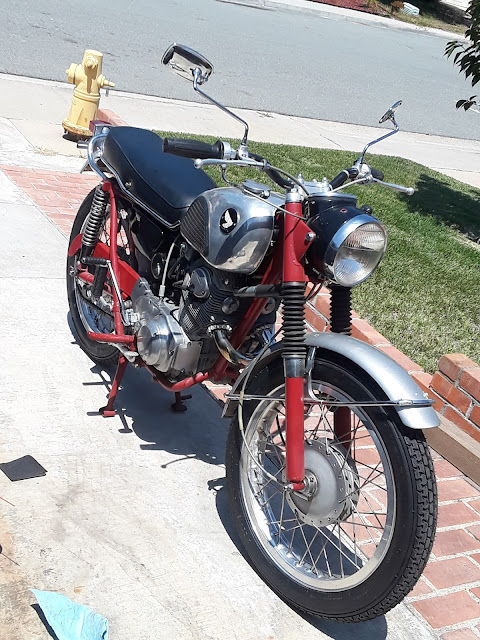