Having owned somewhere around 400 cars and mostly Honda motorcycles in the past 55 years, I seldom pass on an opportunity to pick up a vintage 1960s Honda motorcycle, especially a CB77 Super Hawk. A recent Craigslist posting was shared with me by my friend Burt, who had just seen it a few hours after it was listed. 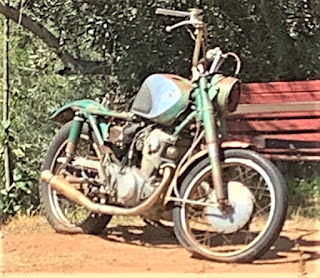 Burt sent my phone number to the seller who called back promptly and answered a few questions including the serial numbers which did match up to a 1963 CB77. Based upon his evaluation and answers to my questions, I packed up the Tacoma and headed out to the location, just 20 minutes away from home, hoping to find some good spares for my already running and riding 1963 CB77. I had put the bike together about 7 years ago from a pile of parts, powder-coating the whole thing black which was cheap and easy. After a 2 hour struggle, I was able to remove the pistons and complete an engine rebuild successfully. The bike was sold to a friend who sold it to her friend, then it went into storage in 2017. I bought it back, revived it, and have used it weekly as a post office box runner, but it could use a bit of bling here and there and a revised seat.

Arriving at the seller’s residence, they remarked that they owned a twin to my silver Tacoma, except theirs had 235k miles and mine 63k. The bike was sitting up on a dirt bank with 2 flat tires and both wheels locked up from rust. The drive chain was rusted solid and the front brake arms would not budge even with a plastic dead blow hammer. The tank had been left without a cap for a long time and there was no petcock. The seat pan had blue upholstery and the original outside strap buckle hardware rusted in place. The ignition switch was broken away from the key section and the left side cover knob seemed to be cemented firmly in place. The horn was missing, the speedo-tach broken and faded and even the dimmer switch functions were all frozen in place.

The bike had been painted metallic green, the rear fender replaced with a custom piece and of course, the big pull-back handlebars were all signs of a “customizing” job common in the 1960s-70s. I stared at the bike’s details for probably 15 minutes, trying to find some redeeming qualities that would make me want to drag it (literally) home, but apart from the chrome-plated factory side stand and perhaps being able to save the fuel tank, there was so much rust on every surface that it would take gallons of Metal Rescue to just get it dismantled and then refinish every surface.

I offered $200 but the seller’s wife said that her husband was “firm” on the price, so I picked up my hammer and left quietly. It’s hard to know who might pay that amount for a bike in that condition, but I guess someone will eventually haul it away. Having dismantled more than a few CB77s in that condition, I have decided that that is not the best use of my time and dollars anymore. I had to pat myself on the back for walking away from this one, as it is a rare occurrence when I do. There are times when the wise thing is to know when to say NO, and mean it.