The latest “get it running” project bike came in from Colorado a few years ago and had been parked here in San Diego ever since, while the owner completed law school. It was bought without getting a second opinion but apparently did run somewhat over a year period before it was moved down to CA. It is a pseudo-cafe racer machine, based upon a 1972 CL350K4. Whoever built it up used a one-piece alloy seat with tail piece and a couple of turn signal stalks poking out of the rear on both sides, like little ant antennae. The requisite removal of the rear fender sections, stock exhaust and installation of flat bars made up the majority of the modifications at first glance. 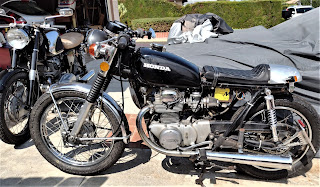 The exhaust system had heat-wrapped, low-slung CB350 header pipes connected with some tubing adapters to connect some long chromed baloney mufflers to the chassis. The owner complained of a rather loud exhaust note, so the plan was to replace the mufflers with something hopefully quieter.

Overall, the tires were dated back into the early 2000s, the drive chain was all rusted over, the fuel tank had about a gallon of very old gasoline inside that had eaten away at the old Kreme coating that was done years before. The forks were leaking badly at the seals and the engine had a line of oil leaks around the head gasket area and just below. The battery was an off-brand that was wedged into the battery box and the original airbox with filters had been replaced by K&N type pod filters.

The handlebars were black and flat, adorned with unknown handlebar control switches and lever brackets. All the cables were either too long or very badly cracked and the rear brake adjuster nut was riding well up the brake rod threads. It was showing about 19k miles on the speedometer, which showed signs of water leaks in and around the faces. Other than that, it was great! :>)

So, the first order of business was to remove the old battery, send the fuel tank out for cleaning and recoating, overhaul the carburetors and petcock, remove the old exhaust system and eventually address the leaking fork seals.

Starting out, the first little problem area was the fact that the carburetors were not a matched pair. 3 D on one side and 722A on the other side. The stock calibrations for the carburetors were different, so one side was running leaner than the other side. The petcock was so rusted and plugged up that a whole replacement one was installed once the tank came back from the shop. I pried out the old gas cap insert and soaked it in Metal Rescue for a day or so, then installed it back with a new cap gasket that wraps around the edges of the inner cap insert.

I blocked up the bike enough to get the forks off and discovered that the stock fork seals were too small for these forks. The fork setup appeared to be from a hydraulic brake model, eventually identified as probably a CB350 Four, which used a long damper rod screwed into the top fork nut. The fender was a match to the forks with the loop for the hydraulic hose. The standard 19” CL350 front drum brake wheel assembly bolted right into the forks, however. 3.00x19 tires seem to be difficult to source these days, so a set of IRC rubber was sourced from 4into1.com that were offered as 3.25x19” front and 3.50x18” rear. With the forks apart, the issue with seal size (not stock CL350!) became apparent. I had one leftover in stock, but had to order another one from 4into1.com as there were none in Honda dealers inventories in California.

Most of the parts came in within a week, so the front tire was changed out after the forks had been rebuilt. The battery came in and the carb overhaul was completed. With power to the system and fuel in the newly relined gas tank, I tried to fire it up to actually hear it run. And it did fire up quickly, however there was a noticeable snapping/knocking sound going on inside the engine as it idled. I tried to pinpoint the source, but it was resonating around inside the engine and not easily determined at first.

I removed the dyno cover and turned the engine over slowly by hand with a wrench on the rotor bolt. At specific times, the snap noise could be heard which gave me a clue that something was happening with the cams, timing chain or valve train components. The next challenge was to remove the top engine cover without removing the whole engine assembly. Honda didn’t leave any extra room around the top of the engine enough to remove the top head cover without either dropping the engine done off of the mounting bolts or pulling it all the way out. I had run across a similar problem with a CB350 engine where just the top rocker box cover gaskets needed to be replaced. I removed the engine mounting bolts and it left me just enough room to get the cover removed. Still that was a lot of unbolting and reassembling the engine components just to get to the top cover. I considered that there might be another option…

Using a cordless drill and some drill bits and grinding bits I ground away a little section of the frame and a matching section of the top cover mount bolt boss and eventually got enough clearance to remove the cover from the engine with everything still bolted in place. You won’t find that procedure in the shop manual, however. With the cover removed, I slowly turned the engine over again with a wrench and heard the distinctive snapping noise in and around the camshaft. As I rocked the engine back and forth very slightly, I could see the camsprocket floating back and forth on the camshaft mounting bolts!

The bolts had backed out to the point where it took more than one turn to get them tightened up against the cam sprocket again. I cleaned the bolts and secured them with Loctite and reassembled everything again. A touch of the starter button had the engine running and it was smooth and quiet like a stock engine should sound. Success for the shortcut repair!

Changing the cables lead to an interesting find. Inside the clutch lifter mechanism there was a little cutoff metal tubing spacer sitting just below the #10 ball bearing. It appeared that there was a problem with the clutch pushrod clearance and that was the answer at the moment. When I installed the new cable, I just left the steel ball in where it belonged, alone, and then discovered that someone had turned the adjustment screw all the way in the wrong direction. When the adjustment was made correctly, the cable pull feel relaxed about 30% and it now felt smooth and normal whereas it was a very hard pull when the bike arrived.

The rear fender was missing so the license plate was mounted upon an aftermarket bracket with built-in LED light that mounted onto the end of the rear axle nut! In order for it to fit, the axle nut needed to be threaded on backward in order for the cotter pin holes to line up!

I finally got it out for a test drive and the overall performance seemed to be nearly faultless. It was a little bit loud but the new mufflers have a removable baffle that can be packed for further sound-deadening purposes. Thus far, the carburetors seem to be dialed in pretty well, but a plug check will let me know more about how it is doing. I have concerns about carburetors that are just hanging on the end of a short, stubby, rubber manifold instead of being supported on both ends by an airbox and filters that are attached to the chassis.

With a new set of tires installed, the centerstand wouldn’t do its job because the aftermarket shocks were about an inch too long. The quick test rides showed no speedometer function, which first led to a discovery that the aftermarket speedometer cable wouldn’t register all the way into the front hub. Trying a spare cable, then revealed that the speedometer needle would barely move up to about 20mph and the reset trip meter knob was locked up solidly. I had a NOS speedometer for a CL450 which worked perfectly after installation. In removing the old speedometer, the single instrument light socket was rusted and the bulb was defunct. I can only imagine what the inside of the old speedometer parts look like now.

Winding down the project, the installation of a set of 12.5” rear shocks solved most of the centerstand instability. As the high spots on the tires wear down a bit it will be just fine. The bike fires up quickly and is running well now. There aren’t any apparent oil leaks, so all the gunk on the front of the cylinders and head came from leaking forks.

It isn’t real pretty, but it is all dialed in and running well now. Next!