Pointing to the past…

I subscribe to many FB forums, plus have my own stream of customers who contact me through my website: www.vintagehonda.com for help with their 50-60+ year old vintage Hondas. For those who are coming new to the hobby and the mysteries of old-school motorcycles, the subject of “points and condenser” ignition systems comes up often. In the 21st Century, the prevalence of electronic and CDI ignition systems overshadows the 20th Century ignition systems, which appear primitive by design.

The points and condenser ignition system, originated by Charles Kettering, is described on many websites like: https://ratwell.com/mirror/users.mrbean.net.au/~rover/ketterin.htm and

As applied to vintage Honda motorcycles, the function is the same as the automotive systems, which had distributors to feed sparks to multiple cylinders, one at a time. On a simple motorcycle engine, the ignition systems started out with self-powered magnetos, which mostly have a fixed ignition timing and do not require a battery to power the units.

Early Honda 50-70cc models all have magneto ignitions, most of which are fixed spark advance designs. Small-bore engines can run successfully on a fixed ignition as they are easy to kick over and start and the spark timing doesn’t cause undue engine heat buildup as what would happen on a larger displacement engine. In the case of the first-generation Honda Cub 50cc models, the kickstart models had 35 degrees of spark timing built-in. However, the electric-start C102 models needed a retarded spark timing to allow the starter motor to more easily turn the engine over at cranking speeds. So, only those models have a mechanical spark advance system built into the flywheel.

Magneto ignitions use a set of contact points and a condenser to manage spark production. They are “live” all the time, so in order to shut the engine off, you have to have a “kill switch” of some design to short the primary voltage to ground. When Honda went into the realm of CDI (capacitive ignition systems) in the late 1970s, they were also self-powered and required a kill system to shut down the sparks.

In their basic form, the ignition points are a variable switch that turns the ignition coil on and off. They are variable, in that the point gap can be adjusted by changing the point base in relation to the spring-loaded, movable point arm, which is operated by the rubbing block. The rubbing block rides on the eccentric point cam and follows the profile of the cam lobe. 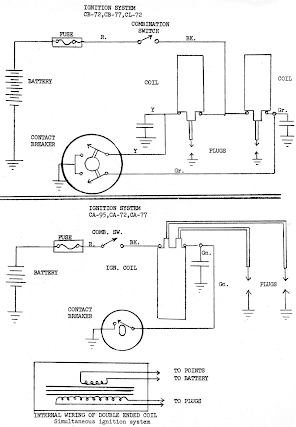 The problems with the point system are that the rubbing block eventually wears down a little at a time, which reduces the point gap. As the gap decreases, the opening point becomes later and later, which delays the spark timing to the engine. On a normal tune-up, the contact faces are cleaned with an abrasive to increase metal-to-metal contact which ensures more voltage going to the coils. Then the point gap is enlarged by the adjustment of the point base screws. This brings the ignition timing back to factory specifications and ensures proper engine performance. To reduce the amount of wear on the rubbing block, high-temperature grease is used to lubricate the point cam. On some point plates, a piece of oil-absorbing felt is located next to the point cam and a drop of engine oil keeps it wet and lubricated.

When all the wiring is intact, the battery voltage routes to the ignition coil which generates several thousand volts when the points are closed. The coil discharges the spark energy when the points are opened, dumping the high voltage out of the spark plug wire to the spark plug where it jumps the plug gap and creates a kernel of energy that ignites the fuel/air mixture inside the cylinder’s combustion chamber.

The timing of the ignition is critical to the engine’s performance as the fuel mixture is compressed prior to combustion. At slow idle speeds, the spark timing should be about five to ten degrees before top dead center on the compression stroke. As engine speed increases, the time available for the combustion charge to ignite also needs to speed up, and the spark timing is advanced by the point advancer unit.

The spark advancer is generally a system of weights and springs where the springs hold the weights in retarded mode and then the weights will overcome spring tension as the centrifugal force increases with engine RPMs. The weights pivot on locating pins and interact with the point cam at the base where the point cam rotates on the advancer base shaft. The point cam then shifts the opening moment earlier in conjunction with the increase in engine revolutions. Full spark timing advance generally occurs about 30-45 degrees before top dead center of the piston above 3,000 RPMs.

The configuration of the engine in regards to compression ratio, cam timing, and shape of the combustion chamber dictates how much spark timing is required to make the best use of the fuel available. When spark timing occurs too early or late, fuel energy is wasted and results in unburned fuels going out of the exhaust system which is a major contributor to air pollution as well as poor engine performance and dismal fuel economy results.

Spark timing directly affects the engine’s manifold vacuum signals to the carburetor metering circuits. As spark timing advances, the engine vacuum signals rise pulling in more and more fuel through the idle and main metering channels. In the case of the archaic spark advance systems in the 1960s Honda 250-305cc twins, the mechanism for advancing the spark timing is inside the camshaft sprocket and not serviceable without engine removal and splitting the two cams apart in order to remove the sprocket assembly.

This system, designed in the late 1950s, seems to be compact and self-lubricating, however, problems occur when the springs lose tension, the weights wear out on the pivot pins, and the little molded rubber stopper cushions on the weights either compress or dislodge from the weight faces. Furthermore, the camsprocket is basically riveted together and the rivets loosen up after many miles causing erratic camshaft timing as well as ignition timing irregularities.

All of these factors create a condition where the spark timing advances prematurely at idle from the normal five degrees before top dead center to twenty or more degrees. With increased spark timing the engine responds by speeding up unnecessarily. The engine speed increase causes more fuel to be drawn through the idle circuits further fueling the tendency to increase engine speed further. This snowball effect overcomes the carburetor’s ability to control idle speeds by the use of the idle speed screws and idle mixture screws.

On the market now are several electronic ignition systems that do away with the points and condenser, but still rely on the mechanical spark advancer for that function. These systems are magnetically triggered and are mostly immune to any wobble at the advancer in the case of the 250-305s.

There are other companies offering ignition systems for vintage Hondas including Charlie’s Place https://www.charlies-place.com/ and a company in Germany that makes a crankshaft-mounted system for the 250-305 twins. https://www.elektronik-sachse.de/shopsystem-3/en/digital-ignition-zdg-3-23-for-honda-cb72-77.html Prices range from $250-400+

While OEM points and condenser ignitions were perfectly fine for their uses when the bikes were built in the 1960-70s, the new electronic systems are maintenance-free and provide a clean trigger signal to the ignition coils for a fast and maximum spark burst to the spark plugs. Maybe it is time for you to bring your bike’s ignition system up to 21st Century specifications now.