What’s next? A pair of twins…

Having just cleared off the work table lift of the last CB77 project, I was contacted by my friend Michael in Orange County who had rounded up a pair of CB175s. Both bikes had very low miles showing on the odometers, but the mileage indications were backed up by the fact that three of the four tires on the bikes were original Yokohama tires. Someone had replaced the rear tire on one bike with a 3.50×18 tire, but the edges were getting chewed up from contacting something inside the fender area, so it needed to be replaced as well. 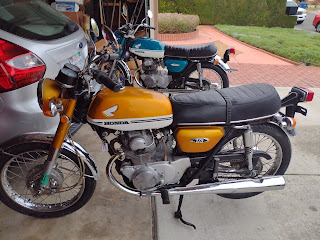 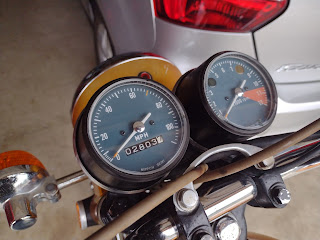 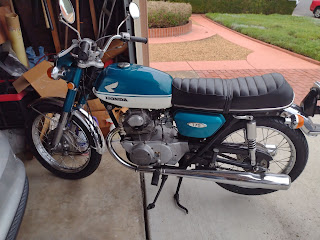 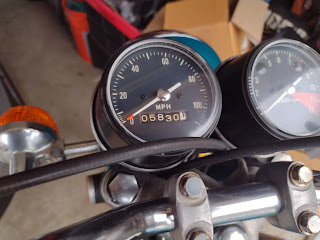 The pretty turquoise bike was from late 1970 production with a 5 (K5) serial number. The bike had the original front brake light switch embedded into the cable, but the handlebar bracket was black on the bottom and shiny silver on top. Apparently, someone tipped the bike over, broke the bracket with the mirror hitting the ground, and then replaced the lower half of the switch with one from a 1972-3 model. The other concern was that the clutch lever was VERY HARD to pull in, indicating the possibility that the clutch springs had been replaced unless the clutch was stuck or the release mechanism is rusted up.

The bike has been refitted with an electronic ignition, but the engine was not running well on one side. Compression readings were 175psi and about 155 psi. The spark plug came out looking kind of oily wet, so it is possible that the engine was overheated and had a partial seizure, causing oiling of the plug.

The Gold bike had not been run for a number of years, so would need the most repair work, but you never know until you dive in and find the problems and solutions.

On to work…Goldilocks goes first

I rolled the gold 1971K6 bike up on the work bench, drained the dirty oil and checked all of the valve clearances first. The carbs were gummy, so were removed and cleaned in my little ultrasonic cleaner. It is always necessary to replace the flattened out o-rings on both ends of the manifolds, which I happened to have in stock. Speedometer was reading about 2800 miles and the front tire was the original Yokohama while the back one had been replaced with an over-sized 3.50×18” CS brand tire.

The left air cleaner cover had a broken tab on the rear which had been glued up with some unknown adhesive but broke again. I wound up replacing all of the frame rubbers for both side covers and used JB-Weld to repair the broken one again. Silicone grease was used liberally to rubber and side cover tabs to reduce further damage.

The Charlie’s Place e-ignition system had been installed with a new coil, but giving the trigger wheel a twist with my fingers revealed that the spark advance function was locked up. The spark timing setup didn’t look accurately installed either, as the magnets were not aligned with the pickup module center-line. The spark advancer assembly was pried off of the end of the camshaft and using Charlie’s online PDF installation instructions the advancer was disassembled and a small locating pin was ground down to allow the ignition rotor to fully advance normally. Setting up the timing is easy with these systems as you only need a 12v test light to probe the connector wires and turn the engine until the F mark lines up. If set correctly, the light turns ON and you are good to go.

After refilling the engine and reattaching the carburetors, I fed the carbs with a remote gasoline tank and fired the bike up. It sounded pretty good, but started to run rich at idle even with the mixture screws out way beyond normal. All the carb jets were OEM parts, but either the idle jets had been enlarged or perhaps the floats were sinking. Compression readings were right about 160-165, so the engine seemed to be sound and should be with 2800 miles showing on the odometer. The valves were adjusted, but were pretty close to specifications.

The gas tank got a phosphoric acid treatment followed by a dose of Caswell epoxy tank sealer product. The petcock feed tube was missing, so the remaining part of the tubing was drilled out and a 4mm tube installed in order to save the part. New gaskets and a screen brought it back to normal function again.

I got an unexpected box of spare parts in the mail from Mike, including an invoice for about $800 for work to install the e-ignition system from a previous repair shop. There was a few lines that included a camshaft and spark advancer too. In the box were the broken parts, including a camshaft with the spark advancer portion broken off and the advancer with the end of the camshaft still stuck inside. Obviously, the ignition system installation went sideways and a lot of money and parts were needed to make it whole again. The date on the invoice was 2019! You just never know about these things...

After cleaning the carbs carefully, earlier on, the only remaining reasons for rich idle mixtures are idle jets that are too large, sinking floats or blocked air bleed passages. First pass was to remove the OEM idle jets and compare them to some spare a/m jets that were leftovers from a different project. I use a set of tapered jet reamers to clean out jets or just as a gauge to see if all the jets are the same size. The removed jets swallowed the whole jet reamer that was barely able to fit through the replacement jets. Using one of those cheap welding tip cleaner tools, it appeared that the jets were bored out to somewhere in the #45-48 size! Mystery solved, as the replacement jets cured the idle problem completely.

All that remained was to change both tires/tubes and take it out for a good test drive to check out everything else before turning to the little turquoise bike. The tire change took an extended period of time, as the brake drums and inside edges of the rims were rusted and needed a fair amount of time with a rotary wire brush and scraping with a flat-bladed screwdriver. When bikes sit for a long time, the air pressure drops down to near zero and the tires come off of the beads allowing moisture to enter and create rust spots. It is pretty much expected on bikes that are 50 years-old now.

If the same guy worked on both bikes previously, I had a road map of what to expect on bike #2.

This pretty turquoise 1970 CB175 had the stock muffler on the left side and a 354 code CB200T muffler on the right side, which fit perfectly. This bike had been running a few months before, but Mike complained that the bike had “over-heated,” during a summer parade ride and hadn’t run properly since.

The compression was a little low on the left side, so a valve adjustment was performed and there were several tight valves that needed to be adjusted. Afterward, the compression readings pretty much matched up to each other, so that alleviated having to tear down the motor for valve work or maybe tired rings. I injected grease into both bikes' grease fittings for the clutch lifters, which lessened the clutch pull quite a bit.

This bike had a Chinese-made Tytronic e-ignition plate installed, but the magnet alignments seemed to be off-target. The system is supposed to have a tiny LED light that turns ON and OFF when the timing marks are aligned, but the light had failed to function. The only way to check the timing was with a dynamic timing light with the engine running. The rotor runs in oil on these engines so they tend to spit out oil when the cover is off, but that was the only way to confirm the correct timing of the unit. It took about three tries, but finally, I saw the correct alignment of the marks, so closed it up, drained the oil and refilled it with fresh 10-30 Honda GN4 oil.

The bike got a new AGM battery installed, as its original AGM was robbed for the gold bike. The carb bowls looked clean and the idle jets were properly sized. When run off of a separate fuel bottle, the engine started up quickly and settled down once it warmed up a bit. A test ride went well going downhill but on the return run, it faltered as if it was either seizing or running out of fuel. After switching to reserve and waiting for a moment, the engine caught back on and got me back home again. As I inspected the gas cap, I noticed that it was some kind of aftermarket cap with an edge vent hole that seemed to be pinched off during assembly. I switched to a known good cap and rode the bike for another 20 minutes without incident.

That bike had both of its original tires replaced with some Michelin City scooter tires, which are one of the few options in the correct tire sizes. The tire sizes for the CB175 are the same as specified for the 305cc CB72-77 Super Hawks, which have seventy-five more pounds of weight and 50% more horsepower. When I checked local motorcycle dealerships for some inner tubes, none of them carried anything smaller than 3.50×18.” How times have changed…