Moving into my 7th decade of life on Planet Earth, I witness changes in my mind, body and daily living habits. I am generally a pretty patient person and try to be helpful wherever I am and with whoever I come into contact with on a regular basis. But I have noticed that, lately, I am a little more careless than usual and the overlooked steps result in having more do-overs than should be necessary.

Having owned and worked on dozens and dozens of 250-305s, I feel fairly confident that I can work on them successfully in most cases, but lately, there have been some unexpected challenges that had me scratching my head in wonder.

Part of any difficulties are of my own making, especially if I get in a hurry to finish up a job for myself or a customer. You get to a point in time, where you think.. “it will be okay”… or “I wonder if it will be okay” after you do a repair step. A case in point…

I have previously written about a CB77 that had such a badly-seized engine that I had to cut the cylinders in half after a lot of pounding on the pistons, just to get it apart. Once it was all torn down, I had the engine vapor blasted and cleaned carefully, then assembled the top end with a used set of cylinders on STD bore and re-used the rings, which seemed to be within specs, but had been run before. The parts seemed to be worth reusing as-is, so I put the engine together with that setup.

Once it was installed, the bike fired up, but had a persistent backfire and was fouling spark plugs with fuel and with oil. Often, when bikes have been sitting for years, the first 15-20 minutes of running will display smoke and often particles of rust or carbon blowing out the back. I gave the bike to the new owner and said to monitor it and see if it cleared up or not. Well, it didn’t and I decided that I should obtain another set of cylinders and have them bored to an oversize using the aftermarket IMD piston kits, which have nice 3-piece oil rings, and the rings are steel instead of cast iron.

The customer wanted to be a part of the exchange, so he helped me tear the engine out of the chassis and put it on the bench. Apart from the used pistons/rings causing oil smoke, the engine looked okay inside, but I double-checked the valve seating because of the still persistent backfiring when the engine was cold. No signs of compression leaks past the valves and when it was reassembled it had 180 psi on both sides. The bike sounded healthy and the customer trailered it back home, left it with an upolstery shop for a month, then brought it home. With little miles added, he had a problem with the idle speeds running fast when the engine was warmed up. So, I asked him to bring it back so I could replace the camsprocket with a rebuilt one that keeps the spark timing steady.

He dropped off the bike, I tilted the engine down to try to just change the camsprocket while the engine was still in the frame and then got a shock when I discovered that the cams and rocker arms were dry and never got oil to the top end! The bike probably ran some 30-40 miles with no oil to the camshaft and rockers! Gotta give Honda some credit for being tough under adverse conditions!

I finished pulling the engine and then tried to noodle out what was blocking oil to the top end. I pulled the clutch cover to check to see if the spring-loaded plunger was still in the end of the clutch pressure plate, which it was. I turned the engine up on end to remove the oil pump, which turned out to be okay still. The oil filter had a film of grit from the cams/rockers that had found its way down the camshaft tunnel and into the oil pump and back into the filter. I cleaned the filter and reinstalled the clutch cover. All that was left was the cylinder block and gasket. With the head off, I raised the cylinder block up an inch and saw that the correct 9-hole gasket was correctly placed. What’s left???

I pulled the cylinder block all the way off the crankcase and turned it over, only to discover that the cylinder casting was a replacement version that had the extended portion for the added oil channel hole but the cylinders were NEVER DRILLED for the oil passage. Mystery solved, but sadly this was the second time that this has happened to me in the last 10 years, where the cylinder was for the 1960-61 engine cases and the extra oil hole was not bored through. ARGGGGH!

I dismantled the cylinder head and flushed out the debris, then replaced the whole camshaft and rockers with good used parts that happened to be in supply. I laid out the location for the extra oil hole and drilled a progressive set of holes until I got it to the right size and depth to get into the oil galley. More flushing and air pressure to ensure that the chips were cleaned out of the passageways. Then a mystery appeared when I was turning the engine over with a wrench and when the left side piston was close to TDC, I could feel the piston hitting something with a thunk and then going past it. I pulled the head back off to inspect the valves and piston, but there were no clear signs of what was happening. When the head was back in place, held down with a couple of sockets, I could still feel this interference happening and actually lifting the head up slightly when the sockets were removed. ????? I decided to put an extra base gasket underneath the cylinders to raise the deck height up a bit and the interference, whatever it was, stopped happening. I still don’t know exactly what was hitting on that side...

Slowly, I reassembled the top end and refitted it back into the chassis. Reassembling the bike’s accessory parts, I had it to a point where I could start it up and see how it ran… There still was a bit of an “idle hang” and slight backfiring. When I squirted some brake cleaner at the carb flange and insulator, the engine idle changed… an air leak!

I normally always check carb flanges for warpage and file them flat so the new o-rings can help seal the intake manifold tract successfully. I removed the carb and checked the flange again with a file. There as still a slight bit of warpage and a low spot around the bottom edge between the flange bolt holes. I filed some more and reinstalled the carburetor. There was a marked improvement in the idle quality and engine sound.

When the bike was first taken away the customer commented that the left side header pipe was turning yellow due to some kind of heat issue. With the backfire going on, I kept suspecting either a leaking intake valve or carburetor internal passage issue. Once the air leak was cured the header pipe quit turning colors.

I should have noticed the correlation between the air leak and header discoloration because it happened to the white CB77 that I had acquired and serviced up. It was getting a discolored header pipe too, and when I looked more closely into the carburetors, I discovered that both insulators were blown out at the o-ring channels causing big air leaks. Replacing the insulators with new o-rings fixed that problem as well.

Had I taken just a little more time in checking ALL the parts more carefully, before installation, I could have saved myself many hours of labor and a bucket of used parts. I plan on being more diligent in the future to ensure that things are done right the first time and at a pace that is comfortable for me and my customers. 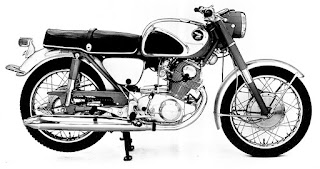