For my birthday, in 2020, during the start of the pandemic, I had the chance to buy a new Royal Enfield 650INT, which was the last one on the showroom floor. RE in Texas had shut down for parts and bikes and this one happened to be Silver and available with a discount, as well. I haven’t bought a “new bike” since my 1983 Honda 750 Interceptor, so it was a big deal and a big chunk of change.

The INT 650 is a great bike with classic styling and all the features that you would want in a comfortable standard motorcycle, like ABS, Fuel Injection, Slipper Clutch, and a smooth 270-degree firing twin engine. Apart from a couple of electrical glitches and wearing out the OEM tires in 3k miles, the bike was a reliable weekend rider getting upwards of 60mpg. I made a few mods to increase comfort, like a softer seat, repositioned footpeg mounts, softer grips, luggage rack, and a little flyscreen.

It’s been the Sunday riding bike that goes out with the Jamuligans (group name) for the past 2 years and I had no plans of selling it at all.

And then came a conversation with my long-time buddy, Gary, who mentioned that he was selling his 1991 NT650 Hawk GT for a great price. Oh, the dilemma! The Hawk GT only came in factory Red that last year of sales in the US and this one had 7600 original miles on it. Gary had bought it from a mutual friend back in 1994 and kept service notes on it for the last 28 years! He had it for sale a few years back and done major service work to it in order to facilitate the sale, which didn’t happen. Fast forward to 2022 and he’s ready to let it go to MrHonda for a great deal.

The bike is in stunningly wonderful condition. Fitted with a Targa 1 quarter fairing, Corbin seat and low miles on the replacement tires, it is in near showroom condition. I couldn’t resist… but it meant selling the RE 650 to make space in my limited garage area. I made the deal with Gary, then went about to get the RE onto the market.

Currently, there are very few RE 650 bikes for sale due to supply chain issues. Local dealers can only order about 4 bikes at a time and have to wait for several months to get them if they are lucky. Apparently, there are plenty of bikes built and ready to ship in India, but there are no containers to haul them out of the country and off to worldwide dealers.

I advertised the bike on Facebook Marketplace and Craigslist here in San Diego. After a few days, I received a message from a young man who lived in the SFO Bay area and wanted to come down to see/buy the bike. He had just had his FZ8 Yamaha stolen and wanted to see about buying a RE INT. Sure enough, he drove his Prius down from SFO, stopping to visit with friends along the way to San Diego. He came by and looked it over, started it up, looked at all the details of the bike and the modifications, then said “I’ll take it!”

I called Gary and told him that I was ready to bring the Hawk GT home the same day, so as the door closed on the RE, the door opened for receiving the lovely NT650. Gary had serviced a new battery for it and was having problems getting it running as he had drained the carburetors back in 2019. I mentioned that Honda’s fuel control system only allows the fuel pump to start up for a few seconds in normal operation and can’t fill empty carburetors as designed. He fed the carbs from a remote fuel tank and the bike fired right up. He verified that the fuel pump was still working properly so it was all good to go.

I did get a rude surprise when I took the bike out for the local event for the Distinguished Gentleman’s Ride and the rear brake started to lock up while I was on the freeway! I managed to get it downtown just off the highway and it pretty much came to a stop all on its own. There was smoke coming from the brake pads and the little plastic cover for the rotor had melted off the bike! I used the tool kit wrench to crack the brake line fitting open which released boiling brake fluid and the brake let go of the rotor. I decided to continue to the event, just remembering to use only the front brake and the rest of the day was uneventful. Mysteriously, when I removed the brake caliper, expecting to find a bad seal ring and corrosion/contamination in the caliper, it was pretty clean inside! So, I really don’t know what happened there. I replaced the pads, flushed the system out with new brake fluid and it has been fine ever since.

I have owned several NT650 Hawks in the past, including a 600-mile original a few years ago, that needed some rehab to get it going again. They are lovely bikes, with a great sound even with OEM exhaust systems intact. I will enjoy the summer riding this little red beauty. The divorce from the RE was quick and not too painful (apart from depreciation costs), but am happily married to the Hawk GT now. Two years after the RE birthday present to myself, I give myself another birthday present with the Honda Hawk. 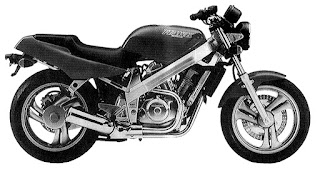