CB360T A bike of a thousand problems… 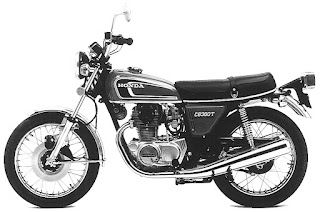 Image courtesy of AHMC
but ran poorly when the owner started it up. The tags on the out-of-state plate were from 1984 and it showed about 11k miles on the odometer. After a battery charge, the owner started it up, but it would barely run enough to go 100 feet down the driveway and back. This should have been a fairly straightforward repair job, but of course, it wasn’t.

One of his first problems was that the petcock was an aftermarket version and the lever positions are backward from OEM Honda parts. So, with little fuel in the tank, putting it on what is normally RESERVE was actually turning the fuel OFF.

On the service rack, it was obvious that some kind of crash had occurred as the tachometer was an all-plastic version used on the early CB350s. The right side mirror was missing, but fortunately, the mirror mounts were all intact.

The air cleaner system is kind of a Jenga mashup with little screened extensions on the tops of the air filter housings, which are held together with a long bolt, plus two more attaching bolts along the top edges. The filters share a central through-passage, which increases the air filter total volume and reduces intake noise in the process. Dismantling the filters leads to the removal of the carb rack, which is controlled by a push-pull set of throttle cables, which are not easily accessible to remove and install.

With carbs off and bowls removed, it appeared that most of the jets were OEM, but the float valves were probably aftermarket. With some of the jet edges rounded off, it was clear that someone had been in there once or twice before. There was some scale in the jets and passages, but they didn’t look that bad overall. I had ordered an inexpensive carb repair kit online from a reseller of Chinese-made kit parts and soon discovered big problems with their kit parts. They included two sizes of main jets, which covered a couple of versions of the CB360 calibrations. Unfortunately, the jets were not marked as to what size they were. I have tapered reamers to clean jets out with and used them to gauge which ones were which as they slid along the reamer surfaces. The jets didn’t seem to be the same size as the OEM jets that were still in the jet holders, however. I sifted through my piles of misc jets to see if I could find other OEM jets to compare these with and came up with mixed readings.

The idle/pilot jets were a completely different problem, however. As they were screwed into the carb body, they tightened up before the threads were fully engaged and when you tried to back them out, there was squeaking and they got harder and harder to remove. Then the slot on top wore down so they became embedded into the body causing a huge problem. Using a combination of left-hand drill bits and 3mm metric taps I eventually was able to remove them and put the OEM-used jets back in place.

The next problem was that the float bowl gaskets were entirely too small for these bowls. I contacted the eBay seller outlining the problems and they offered a refund for the parts, but I still had to order a separate set of bowl gaskets to close the carbs up. I put the carbs back onto the engine and fed them with a remote bottle, to see how it sounded. And it ran horribly…

I had already replaced the points, condenser, and spark plugs with an old OEM tune-up kit so was confident that those parts were not part of the problem. I also adjusted the valves and timing chain. These engines had a recall for damage to the tensioners, but there was no sign that this engine had been done, however, there was no evidence of a broken tensioner. The oil came out dirty, but nothing in the way of damaged metal parts was evident.

I removed the carbs again and carefully checked them over, then discovered that my inspection of the carb diaphragms missed the fact that there were tiny pinholes in the rubber diaphragms. I ordered a set of replacements from 4into1.com which came in 2 days. With new diaphragms installed the bike began to sound much crisper but it would take turns not idling well on one side or the other as it warmed up. The coils were some kind of aftermarket replacements, but whoever installed the spark plug caps onto the wire end kind of missed the center of the wire core, so the spike inside the cap was running parallel to the actual wire strands, probably arcing across the little barrier. The more I worked on the carbs and other subtle problems, the better it ran, but it took about 4 attempts of pulling the carbs on and off to get it to run properly.

The fork seals were leaking slightly, so new seals and dust covers were ordered up. The forks come off easily, but the bottom damper bolts were very tight, which slowed the disassembly process down until I put an air wrench on them. When I drained the forks I noticed that one of the drain bolts was not a 10mm bolt head size. Probably SAE instead! In the end, both drain bolt threads were damaged from a previous repair attempt, so I had to put a Heli-Coil insert into both sides with a sealing washer to prevent leaks. For some reason, the fork seals were very difficult to remove. I had to use a Dremel cutoff wheel on one of them to get it loosened up for removal. While attending to the forks and front brake caliper earlier I noticed that the date code on the front tire was from 1986! The owner agreed that a new set of tires was in order.

Finding tires for vintage Hondas seems to have gotten quite challenging recently. I guess the global supply chain issues are hitting all industries. In this case, the owner ordered a set of correct-sized tires from Amazon. What showed up was some Chinese-made K70 tread pattern rubber. He had ordered tubes and rim bands, but the tubes were back-ordered. Fortunately, I happened to have a set of new tubes on hand, so that little delay was averted.

The front disc brake had a soft feeling as if there was air in the system, as it would improve if you pumped the lever a few times. I rebuilt the master cylinder and caliper, bled out all of the air, but the soft lever feel persisted. All that is left are the flex lines, which of course are almost 50 years old. I wrapped a bunji cord around the brake lever overnight to see if would force any trapped air from the system. The next morning the brake system felt the same, so new hoses were ordered/

The drive chain was worn out, of course. It was the factory-installed endless chain that Honda was putting on bikes back then. I had a spare chain in stock, so averted ordering another one. I have noticed that local motorcycle shops don’t even stock anything except o-ring chains for $100+ prices. Any plain roller chains have to be ordered.

More little issues arose, like the three speedometer light bulbs were all blown out and the headlight bulb was working but the seal between the glass lens and reflector had deteriorated, so the lens was rotating around inside the reflector as the chassis vibration affected the bulb. A layer of GOOP solved that problem.

The handgrips were those original ridged OEM items that are hand-killers after 10 minutes of riding. Honda used them on many bikes during that time and they are truly a horrible choice. I ordered the smoother OEM Honda replacement grips and installed them easily.

When the seat was flipped open, I noticed lots of battery acid damage around the battery area, including the nearby starter solenoid. Someone had failed to keep a drain tube on the battery and acid splashed all over the battery box and surrounding chassis parts. The battery box unbolts from the frame, so was treated to some rust neutralizing spray and a coat of black paint. The list of little tasks seemed endless as they were dealt with one by one, but finally, the bike was ready for a road test. I had forgotten how nice it was to have a 6-speed transmission behind a vertical twin like this. The engine makes impressive power and keeping on the boil was easy when you have all those gears to play with while riding. Fortunately, the clutch function was intact and I avoided having to pull the clutch cover to unstick the clutch plates.

The run of the 360s, which replaced the long-standing 350 twins, was only for a few years. With so many bikes on the market at the time, including the lovely CB400F, the 360s never really caught on with the public. Honda made a Scrambler version for just a year and a CJ360 cafe-style bike that was pared down with the removal of the electric starter, disc brake, and centerstand. That model featured a 2:1 exhaust system, as well. Honda tried their best to keep that series alive but eventually replaced them with the new CB400T twins with 3 valve heads and electronic ignition systems.

The bike was returned to the owner, who swapped out the 360 for a CB550 in similar condition with similar sets of problems which will be the subject for the next story.