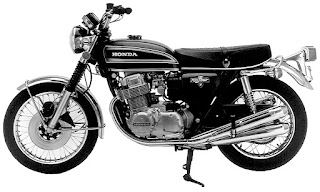 What it looked like new from the factory.
Having just cleared the backlog of bike repairs, a customer referral caused me to bring home another bike for a “minor” electrical repair. The 2-3 cylinders were dropping out intermittently after the bike had been at a shop for 8 months for a top-end overhaul. Even with an upgrade to Dyna Ignition and Coils, the bike continued to quit on the middle two cylinders.

It seemed like a repair that I probably could have done in the man’s garage, but time was tight and it looked like there was more to do than to hunt down the electrical gremlins. So, it was loaded into the Tacoma for the 30-mile drive home and unloaded the next morning for a closer view. The bike had had a rattle can silver paint job on the frame, some Clubman handlebars, a very fat 120/90-18 rear tire, a drive chain way too tight, oil leaking from around the left side of the cylinder head, an oil pressure warning light that turned on when the high beam was selected and a few other issues. The carbs were fitted with little cheap cone-shaped pod filters and the rubber sealing boots for the top of the slides were all MIA.

Fortunately, the dead ignition symptom was still present, so after the fuel tank was removed, access to the ignition system connectors was easily performed and what seemed to be a decent installation turned out to have a pair of undersized bullet connectors that were floating around inside the insulated ends. I replaced the bullet ends with larger sized versions and tested the system again. After clearing out some leftover un-burned fuel in the dead cylinders, they came back to life and the engine started sounding a whole lot more like a normal CB750. Mission accomplished… or not!

The owner was impressed with my findings and wanted me to work on his OTHER CB750 after I was done with this orange one, however there was a pressing need to fix the oil leaks that appeared to be from the newly installed head gasket. The saving grace for this particular bike is that the frame sections above the head were cut out and then then special tubing splices were installed to reunite the frame section after the gasket repair. I probably wouldn’t have even taken on the job if I had to pull the heavy lump of a motor out of the frame. With the owner’s permission I ordered a set of top end gaskets from my friends at 4into1.com and tracked down a $90 set of the OEM carb boots for the carburetor tops.

There was a lot of fiddling to get the frame section loose. The fasteners were all SAE nuts and bolts and all the splices had to be slid aside to get the frame piece out of the chassis. Eventually, it all came apart and I was able to begin removing the top end components. The top cylinder head cover was all held down with stainless steel Allen bolts, some of which came out with some difficulty. This is usually an indication that the threaded holes are damaged, which isn’t unusual for a lot of the Honda Fours from the 1970s. There are a lot of little nuts, washers, bolts and screws that hold the top end together and they all have to be dismantled in a certain sequence. I removed the one accessible cam-sprocket bolt which holds the cam-sprocket to the camshaft, then kept working on the other parts. Suddenly, I noticed that the cam-sprocket had fallen off the camshaft when I had brushed up against it! There was NO second bolt and the one I removed was not very tight. Looking around the base of the valves, I spied the missing cam-sprocket bolt all mangled and unusable. There was a random piece of aluminum that had broken away from somewhere but I didn’t see the source right away.

Eventually, the cylinder head was ready for removal and cleaning. The tops of the pistons were barely coated with some burned oil carbon deposits, so it hadn’t been run for too many miles. In checking all of the 6mm bolt holes in the head, the first thing I did was to flush the holes out with brake cleaner and I was surprised to see a lot of old oil deposits that had been lurking deep down in the holes. The contamination inside the holes can cause the ends of the bolts to bottom out inside the hole and that in turn, damages the threads. Eventually, I wound up repairing seven 6mm holes with Heli-Coil thread repairs.

After prepping the head for re installation, I loosened up the drive chain so it had some slack to it and then spent another 20 minutes dismantling the back of the speedometer to access the various light bulb sockets and then determine which ones needed to go where. I checked the wiring inside the headlight shell and found a lot of either disconnected wires or ones that didn’t match up to normal OEM Honda wire colors. Eventually, I sorted them all out so that the neutral light came on in the green lens and the oil pressure light came on behind the red lens.

The gasket set which was ordered on a Friday morning, went out to the post office that day and landed in the mailbox on Saturday afternoon’s mail. I was all ready to open the kit and start installing new gaskets and o-rings from the D&K branded gasket kit. I had a bad experience with a CB650 gasket kit from these makers a few years back and hoped that those problems had been long-solved.

Sadly, the CB750 head gasket had numerous mismatches where the 6mm bolt holes were supposed to line up It was just off here and there, but clearly could not be used as-is. I used a rotary file tip to enlarge the holes in the correct direction so that bolts could be installed once the cylinder head was dropped down in place. This probably took an additional 30 minutes of test fitting and whittling on the gasket, which can be easily damaged, but finally I felt like it was going to work.

Bolt by bolt, I installed the four external 6mm bolts which are exposed to the outside, then the front and rear bolts in the center of the head, followed by the all the washers and nuts on the cylinder studs. The sealing plugs were a nice tight fit, but I glued them in place with Gasgacinch gasket adhesive. The old sealing plugs were about 1mm thinner and not a tight fit around the edges of the holes where they are fitted. It appeared that the last mechanic had chosen to reuse most of the rubber parts and all of them had flattened out over the years.

With the head bolted down and the cam towers installed, the rest of the process is getting the cam timing correct and getting the rocker arms and rocker arm shafts all installed, followed by a valve adjustment. I had to order new cam-sprocket bolts, which are 7mm, from an eBay seller. Those came down in 3 days from the Delaware, and were installed with a dab of blue Lock-tite to ensure that they don’t try to back out once more.

It takes a bit of time to dismantle the carb tops and linkage bits to refit the rubber sealing boots. They are not really critical for operation, but keeps corrosion and dirt from damaging the adjustment nuts. They are fussy to install into the grooves of the adjuster sleeves and you have to pull them away when you are syncing the carburetors.

Slowly, all the hardware and brackets were all reinstalled and the bike readied for a start-up with a newly sealed cylinder head. There was a little hiccup with installing the new camshaft sprocket bolts. Despite looking at the threads of the side where the bolt flew out, the new bolt didn’t want to start into the hole. This was one of the last steps before putting the top cover on, so everything was in place like rocker arms, etc. Fortunately, my aged MAC tap and die set had a 7x1.0mm tap in the set, which was never used in the last 30 years. I rolled the engine over so that there was a little bit of room to insert the tap and I turned it over with a 7mm open-end wrench and was able to clean the threads up with everything still in place.

I had set the top cylinder head cover aside when it was dismantled, and when I grabbed it for some cleaning up, I finally noticed a quarter-sized hole that was punched through when the bolt made its exit. Fortunately, a friend in Lakeside (16 miles away) was the CB750 whisperer for many years and had a spare solid cover available. It was a bit scruffy, but I saw that he had a bead blaster in his shop. He offered to let me use it and that made the price more palatable. Once home, a good wash job and some aluminum paint made it look pretty good.

The reassembly process continued with the carburetors and wrestling the 4:1 exhaust system back onto the spigots and all clamped down. The fuel tank was installed and fuel lines were attached (OEM 5.5mm hose not that plastic crap). The bike fired up almost immediately and sounded like it was hitting on all four cylinders evenly. After a warm-up, I took it out for my local test run for about 5 minutes, then returned to check for leaks and problems. Some of the leftover oil and grease had heated up and was drooling down the engine surfaces, but there were no active leaks on the top end now. Of course, after the second good run on the freeway, oil leaks surfaced from elsewhere.

The gasket and seal kits came on the same day, so with some careful cleaning and a little bit of Gasgacinch sealer to help the sealing process, the gaskets were installed successfully. I had to add some extra sealer around the rubber grommet for the stator winding wires, but it looks like it is ready to return back to the owner.

I suppose the next task will be to look over his other CB750…..