Deja Voodoo…. The evil twin takes the place of the Orange CB750

I dropped off the Orange CB750 Cafe bike to the owner, after more than a week’s worth of dismantling, ordering parts, cleaning, adjusting and doing a deep dive into what I had to work with. The owner was thrilled to have it back, but then pleaded his case about having me “take a look” at his black CB750 which is a mismatch of K0 engine parts, an unknown frame, custom 4-into-4 exhaust pipes, Clubman bars, and a set of pod-filtered K2-ish carburetors.

The quick rundown was that he was putting a battery in it every few months and the bike kept dying due to charging system issues. Beyond that, the custom exhaust “mufflers” (there are some baffles inside but they don’t do much) were hitting the end of the swing arm on the #2 pipe, and the side stand was wedged in between the #1 and #2 pipes so that the shortened stand arm was getting stuck between the mufflers and didn’t fully retract which was causing grounding issues on left-hand turns.

Also mentioned was that the engine was an 836 big-bore motor with “low compression” in a few cylinders. There was a misfire in #3 cylinder and rattling noises coming from the engine cylinders as well as a very noisy clutch.

We loaded the bike up and I drove it back to Casa de Honda for a going over. With the tank removed and the side cover removed, I had access to a Medusa-like nest of wires that were zip-tied and taped up that were going every which way. The first tests are on the stator and field coil with the harness lead disconnected and the VOM first checking continuity with the buzzer function. All three yellow wires were connected and not grounded. The field coil checked out okay, with a 7.9 ohm resistance value. The bike had already had a solid-state regulator-rectifier installed which was a Hail Mary attempt at solving the charging system issues. Working backward from the connector to the Reg/Rec unit into the harness I discovered that one of the three yellow wires wasn’t making a connection down to the control unit. Unwrapping old, oily electrical tape and cutting a few zip-ties got me to a section of the harness that had been zip-tied to the carburetor throttle cable bracket. Pulling it away and unwrapping the wiring revealed a separate yellow wire that was smashed up against the carb bracket and the friction and vibration had worked the wire into two ends. I cut back the ends and crimped a butt connector into the harness wire. Checking with the VOM again, I had continuity all the way through the three stator wires.

I fired up the bike with the gas leftover in the carburetors and watched as the voltage increased as the revs built up. So far, so good.

The compression test came back with 140 psi in #4, 160 psi in #3, 190 psi in #2 and nearly 200 psi in #1. The high compression numbers are consistent with the 836 big bore piston kit, but the two lower numbers, side by side, often indicates a blown head gasket between the two cylinders. The #3 spark plug came out with a much different color than the other three, which indicated either a lean condition or has something to do with the blown gasket.

This bike had the same removable frame section kit installed like the Orange bike, so with that frame piece out of the way, the tappet cover could be removed for a quick look at the overall condition of the engine internals. Everything was pretty clean and well lubricated but when the engine was turned to 1-4 TDC for a valve clearance check, most of the “loose” ones were too tight, including the intake valve of #3 cylinder.

With the difference in the cylinder pressures so great, it was time to pull it apart and find out what was wrong with it. Wrestling the exhaust system off was the first challenge as the original header pipes had somewhat baffled muffler bodies welded on, but only the outboard mufflers had brackets to the frame. The inboard mufflers were attached to the frame with radiator clamps. The #2 muffler came off and had a big hole worn through it from where it was rubbing against the sidestand/bracket area. That required a trip down to my friend, Rob North, for some creative clearance work building a little box into the muffler body.

The carburetors were a chore to remove from the manifold stubs, as the heat and age had hardened them into solid blocks of plastic. I had to use a Dremel cutoff wheel to remove the manifolds from the cylinder head. A check of the carb bank showed float levels a bit low, but #140 main jets installed. That is pretty big for most applications, but the spark plugs seemed to be reading okay.

With the camshaft disconnected and removed, the zillion head nuts and various bolts for the rocker arm stands were all extracted, but I could feel that there were stripped 6mm bolt holes in the head. Two of the bolts were not installed at all, owing to the fact that the rocker box gasket holes were out of place, so they decided to just leave them out.

The head was lifted off and the condition of the head gasket seemed to be fine. It definitely was a big bore motor, so a Cometic special gasket was sourced from an eBay seller. The bore spacing on these engines are pretty wide, so the chance of a gasket blowing out between cylinders seems remote. That left the valves to be inspected. All of the valve heads were marked “Made in Japan” which indicates that they are NOT OEM parts. The intake valves wouldn’t come out of the guides until I filed down the ridges that had formed around the valve keeper areas. The valves and seats were making good clean contact, so that left the exhaust valves to be the source of low compression. Sure enough, the exhaust valve seats in the head looked pretty good, but all of the exhaust valve faces were pitted all the way around and all were exactly the same. Honda wants $70+ each for an exhaust valve, so I tapped into my account at www.cmsnl.com and ordered up a whole set of valves (same brand), plus a set of reproduction intake manifolds and a few spare bolts/nuts for about $250 delivered from Holland.

I had to reorder a set of Heli-coil repair inserts to repair all of the damaged 6mm holes. An eBay seller has a nice kit for less than $20, with 25 inserts, plus all the installation tools. After de-greasing the head and installing all the inserts, it was ready for new valves and stem seals. I bought a different brand of gasket set (NE) from an eBay seller and instead of ill-fitting gaskets, I was dismayed to discover that the “complete kit” was missing all 6 of the rubber seals, the two small o-rings for the rocker stand feeds and the 8 sleeve rubbers that are used on the later engines. The kit was labeled 1969-76, but was sorely lacking in content. I complained to the seller and was refunded $11. It’s another case of wondering why some company would go to the trouble to make a gasket set and get it all wrong….???

After waiting for all the incoming parts orders, the reassembly commenced. The camchain was a little worn, so you can see it moving a bit on the sprocket. Camchains on 750s are the same length as those on the 250-305, 350 engines, but they are endless instead of having a master link. To replace the camchain requires a full tear-down of the engine so you can loop the camchain over the crankshaft sprocket.

Initially, I missed the cam timing by one tooth and a quick check of the compression readings came up in the 120 psi range! Shifting it back to where it was supposed to be yielded 170 psi readings across the board. Slowly, the rest of the top end was reassembled and buttoned up. The new intake manifolds were almost as hard as the old ones. It took about a half hour of shifting them around and pushing the carbs on with a pry bar to get them seated and clamped down correctly.

Wrestling the exhaust pipes back onto the chassis was another twenty-minute task, as all the clamp bolts were rusted and needed to be replaced and the pipes positioned correctly. The inboard pipes were reattached with hose clamps again as there were no other options. Working on these “custom” bikes has worn me out with endless tasks to make the parts go back onto the bike working with someone else’s ideas of what is “cool” and custom.

I fired the engine up on a remote bottle feed to see how it would run. The mufflers appear to have baffles on the end, but they are basically straight-through, so quite loud. I’m sure that my neighbors will be pleased not to hear that roar for too long.

The fuel lines cracked when I pulled on them to hook up the petcock fittings, so those needed to be replaced with 5.5mm Honda hoses. The rear brake pedal hits the muffler unless you position it just right and adjust the brake rod to find a happy place between being too high and hitting the muffler below.

Eventually, it all came together and it went out for a test run around town. The bike has a bit of a flat spot at 4k then comes alive after that. Idle is good but there is a little backfiring happening in that #3 cylinder that must be carb related, as the manifolds were all changed and the jetting is the same as all the other cylinders.

With some miles run in with the new owner, we'll see if it heals itself or needs a round of carb work which is quite time-consuming with the later carb sets. I dropped it back off to the owner and he's happy to have both bikes back and running with a lot fewer problems and more understanding of what they need and perhaps a deeper knowledge of what to look out for in future purchases. 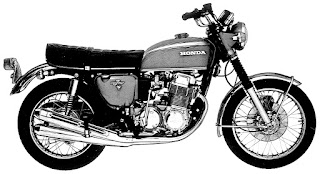 What this bike would have looked like from the factory.