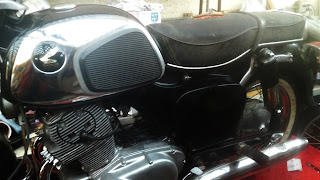 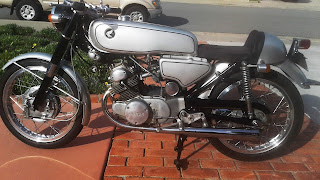 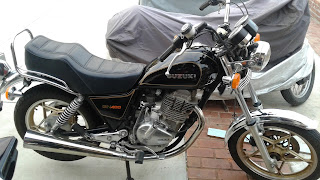 After wrapping up the engine work using some new copper sealing washers and nuts for the cylinder head, the starter motor and accessories were attached for final assembly. I eased the 110 lb motor down to an awaiting bike stand which I use for loading engines in and out of 250-305 chassis.  Dream engines go up and in with a vertical lift, a little at a time. Some powdercoating was ground away inside the engine mount points to ensure a good engine to chassis ground before engine loading.  Dream engine installations are a bit of a puzzle which needs to be done in pretty specific steps otherwise, you wind up having to unhook something to put in a part, once in awhile.  The bottom motor mount bolts have to be inserted through the holes in the footpeg mount bracket before they are tightened up. The smaller 8mm bolts must also be in place at the top of the footpeg bracket ends. With two bolts at the top cover and four at the back, the engine is pretty solidly mounted to the frame. The engine harmonics tend to send vibrations back to the end of the rear fender, often resulting in vibration cracks in and around the tail light bracket.

It is best to mount up the air filter/tube in the frame hole opening before engine installation, however wrestling the carb end of the air filter tube onto the carb inlet can be a bit of a chore. I had secured all the proper sized o-rings for the insulator and carb flange so the carb was about ready to be mounted up when problems arose. The carb had been apart in a plastic container for a few weeks and they hadn’t had close inspection until assembly time. While the carb body was undamaged, a previous attempt to remove the stuck slide caused damage to the front and rear edges of the slide and mangled the aluminum slide needle to a certain degree.  Searching for a new or good used slide and needle online came up empty-handed. Apparently there are some subtle changes between the 250 and 305cc applications as both the needle and slide for the 305s have 266 code part numbers, vs. the 259 coded parts for the 250cc edition. Considering that they both share the same carburetor body and slide bore size, one wonders just what Honda found to make them create different parts for each application
.
Digging through the dwindling box of carb parts, a 22mm slide appeared, but it had a 3.0mm cutaway, vs. the 2.0 cutaway for the Dream slide. Typically a 3.0mm slide is for the CB/CL72s. Still, it was better than the poor original slide, so it was put into play, along with a straightened out needle for temporary running purposes. Doing some research, the needles for the 250 Dreams had a part number revision from 259 to 268, which are for the CB/CL72 models. I found some cheap OEM 259 needles in Thailand from an eBay seller, so one will be arriving in the next couple of weeks.

The bike came with its original stainless steel mufflers, although they were the early style with the sharp-edged openings which require the black sleeve gaskets. I only had one of the gaskets and no one had just one for less than $45 (ouch!) so I got a pair from my Thailand supplier on a deal for $55 including shipping. The header pipes had been rechromed back in the year 2000, according to the paper that they were wrapped up in. Dream pipes are side-specific and one side is longer than the other side. I had always been under the impression that the left side pipes were the long ones, but in the process of fitting up the headers and mufflers, the long side pipe would only work on the right side of the bike! Lesson learned/relearned, I guess.

Once all the wires were hooked up, carburetor installed and exhaust system in place, it was time to light this thing off and see what I wind up with after weeks of work and quite a lot of expense. The ignition switch was turned to ON and the neutral light immediately glowed on the headlight shell. Tapping the starter button for just a second confirmed that the electric starter was still functioning, as well.  So, with a temporary fuel supply bottle hooked up to the carburetor line, the choke was pulled fully closed and the starter button depressed in earnest.  The engine spun over about 5 turns, then the starter motor began to labor due to dwindling battery current.

I lowered the bike down to ground level, still on the repair stand and swung a leg over the chassis to kickstart the engine while there was still some juice for the ignition coil. It only took a couple of strong kicks to get the engine to begin sputtering back to life for the first time in many years.  The big carb slide cutaway caused it to run lean off-idle, so a combination of turning the mixture screw almost all the way in and raising the idle speed using the speed screw finally kept it going with the throttle released.

The first few minutes of a new engine startup are critical, so everything needs to be spot-on for a successful run-up period. After warming the engine up for a few minutes, it was shut down to check for leaks and to recheck the ignition timing. The ignition timing was advanced by a good 5-10 degrees, which was reset by rotating the backing plate in the mounting plate and then reducing the point gap a few thousandths of an inch.  The engine sounded good, with no abnormal noises whatsoever. A quick look beneath the engine revealed an alarming amount of motor oil dripping off the bottom of the engine. Despite a careful disassembly, cleaning and use of all new gaskets for the oil pump, there were signs of leakage in the middle of the gasket/oil screen flange/gasket sandwich. I really haven’t had these kinds of problems before with oil pump installations, so it came as quite a surprise to see.

I really wanted to drain the oil anyway and check the filter for debris that was washed out of the various passages and any leftover media from the vapor blasting process. The clutch lever was a VERY HARD pull for some reason. Thinking back, I vaguely suspected that the clutch springs were somewhat heavier than normal for a Dream engine. That, plus the clutch cable being used was about 4” longer than the original combined to cause a lot of friction through the clutch release parts. I had already installed a new clutch thread in the kickstarter case and the clutch lifter seemed to be in good shape. Early Dreams use a clutch cable that is over 4 feet long, plus it is routed through the frame where it makes several tight turns and twists before entering the kickstarter cover at a 45 degree angle at the rear.  Later models used a much shorter cable which goes straight down the top of the kickstarter cover and that improves the whole clutch feel/pull effort a lot.

With the clutch cover removed, the clutch springs were removed and found to be probable CB72 parts. The correct Dream clutch springs have been superseded to 425 code parts from the DOHC CB750. I happened to have a set of new ones on hand, so that problem was easily corrected. The filter was disassembled and cleaned with minimal amounts of debris found inside. With clutch service work done, the cover was reinstalled after the filter was mounted and the rest of the chassis parts re-attached for another engine run. The oil pump was removed and checked for obvious sealing issues which were not readily apparent. The pump was re-installed and new oil added.

The engine started happily with fresh oil in the crankcase, but the oil pump leak was worse than before! The engine was run for another 10 minutes on the stand, then shut down to cool.  A correct clutch cable came in the mail on the following day, so the right side of the engine was stripped off to install the new cable, add the lower chain guard half and recheck everything on that side of the engine. The oil was drained again and the pump inspected. An additional bottom gasket was placed on the pump body in holes that it might help smother some of the invisible irregularities which were causing problems previously.

One week later…
Time out on the Dream project, while I drove to Las Vegas and back for the Mecum auctions. I hadn’t planned on buying anything and was hoping that the 1974 BMW R90S project bike would find a home while I was visiting, but no such luck, so far. I did buy a 1980 Suzuki GN400X which had 3300 original miles on it for $500, plus fees. After that; out of nowhere came a CR93 Replica bike that looked eerily familiar. The bike was not on the floor when I checked that morning and wasn’t in the auction program whatsoever, but THERE IT WAS! The bike had an alloy CR93 style tank and racing seat. It started out as a CB160, but acquired a CL175 5-speed engine/trans combo. AKRONT rims were laced up into polished hubs. Rearset pegs were installed on modified CB72 footplate mounts. The bike had a CB77 speed-tach combo installed in a CB160 headlight shell and it even had “winkers” installed! The bike was all polished, painted and chromed to a nice finish and overall workmanship was well above average for a one-off machine like this. I wound up paying a pretty high price for the bike, but I couldn’t have built one for that figure.

After the auction was over, I walked back to see just exactly what I had won and that familiar feeling returned to me… I owned the bike back in the late 1990s, but not in such nicely-finished condition!
When I returned home, I had a few boxes of parts waiting for me, including a set of carb covers and an upper chain guard, both of which came from a friend in Canada. The parts needed freshening up, but were in good useable condition, once some new paint was applied. The chain guard seemed to be different than the original lower half and it took quite a bit of fiddling round, bending things here and there  and generally spending way too much time on a chain guard installation. Eventually, I won out and the bike now has a fully enclosed drive chain; but not until after I removed the whole rear wheel unit, in order to see/feel and adjust the two halves to blend into a single assembly.

The petcock was cleaned and refreshed with all new sealing parts inside, then the tank was hoisted up onto the chassis for bolting down into place. The seat is original and has a very crispy cover with a hole in the center. The foam is all brittle underneath the cover, so either it will get a patch of super duct tape or I will have to succumb to buying a cover and foam package for redo. More and more it seems like every step you take in rebuilding these bikes is a $100 or more step.
Posted by MrHonda (Bill Silver) at 7:37 AM