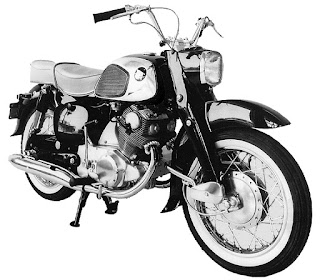 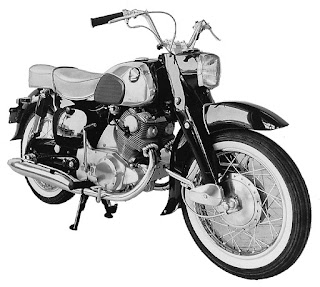 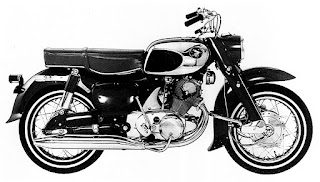 Some years back I tried to catalog all the changes that occurred in the 1961 vs. 1962-later CB72-77s, which were many back then. If you are just getting into the world of 250-305s Honda twins from the 1960s, you might have run across Honda’s photos of CA77 (Early) and CA77 (late) editions. The same applies to the CA72s, as well, but they didn’t always have completely parallel changeover periods.
For the sake of the discussion, I am only referring to the wet-sump Dreams from 1960-67, not the dry-sump models from 1957-60. When viewing a Honda Dream, the main differences between early and late models is the shape of the fuel tank and side covers/knee pads, handlebar controls and the luggage carrier brackets by the rear shocks. Early CA72 models even had a different fuel tank design than the CA77s, which was a feature that was done away with when the later model bikes were released.
As an overview, I am including some preliminary information from my Honda CA72-77 Dream restoration guide download package available for sale from my website: www.vintagehonda.com
The first generation CA72-77s were brought over to the US in 1961. I have seen several engines stamped C77-A1XXX, instead of CA77, which agrees with the production number charts, posted in early parts manuals. The 1961 versions had the “rear breather” lump on the top rear of the upper crankcase half. The idea was that crankcase vapors would be separated, via the labyrinth, inside the round canister-shaped casting and then some of the solids would dribble out through a small one-way check valve to oil the drive chain. This feature was used until CA72-110101, CA77-110900), when it was deleted and the breather duties were taken over by the top cylinder head cover. Other changes, in the early years, included the inclusion of a spring-loaded primary chain tensioner in 1963.

Note that the Keihin carburetors changed from “round bowl” to “square bowl” designs, probably in 1964, so the float bowls and bowl gaskets will not interchange, but you can use square bowl floats in the round bowl carbs. Nearby, the first generation camchain tensioners had a left-side adjustment bolt feature which was changed to the right side after 1963. BTW there were Mikuni carbs fitted to some early CA72s.

Visually, the most striking differences between the 1960-62 and the 1963-later machines were in the shape and styling of the fuel tanks, knee pads and side panels. The changeover came at either CA77-20902 or CA77-20851 (CA72-20250 or CA72-311110), depending on which resource you read. However, in reality, the changeover took place somewhere in the middle of the 1963 production run. The early tanks swept more forward and the fuel crossover fittings were at the front edges of the tank, whereas the later tanks used a more central location for the crossover tubes, adjacent to the petcock location. It has been noted that during the 1963 production run (which is when the cross-over from “early” to “late” models were transformed) Honda added a 5 into the engine numbers to differentiate the two series of bikes, so the “late” 1963 engines appear to be exactly 5,000 numbers higher than the chassis, however the end 5 numbers continued to be within a few hundred of the frame’s last 5 digits.

1963 was the only year where they added a 1 into both the engine and frame numbers in the beginning sequence, so you will see them shown as CA77-31xxxx or CA77E-311xxx. You really DO have to check your 1963 serial numbers against the parts listings to see if certain parts qualify for installation, depending upon whether the bike is an early or late model.

The 250 tanks used different shaped tanks/side covers. The “frog eye” side covers brought the plastic tank emblems out to a more vertical positioning than the 305 emblems, which laid on the rounded surface of the tank panels. The 250 tanks also featured a chrome strip that covered the central tank seam. Early tanks had seamless fuel tanks with a central fuel location, whereas the later seamed tanks located the filler hole at the right side of the seam, which allowed for easier filling when the bike was on the side stand. Another small change was that the HONDA emblem was not used on the bottom of the headlight shells until the “Late” models were introduced. Also, the rubber front fender packing and chain guard inspection hole covers were gray material, changed to black for later versions.

The handlebars and controls were another visual change from the 1962 machines onwards. Pre-1963 bikes had twist throttles, where the throttle drums pulled directly on the throttle cable, which exited from the bottom of the throttle housing, like those of the CB/CL72/77s. The mirrors were mounted on a set of clamps, separate from the lever brackets.  The handlebars and mirror clamps were all 257 coded parts, carried over from the CE71 models.

The post-1963 clutch and front brake cables gained shiny, chromed elbows, which held the cables out and prevented kinking to a certain degree. The new mirrors were mounted into new lever perches, eliminating the crowded look at the handlebar ends. Honda was now able to use the same mirror set (derived from the CA95s) on all 250-305 model machines, including the CB/CL72-77s.

1963 also seems to have marked the passing of the tire pumps, which were bracketed on the left side of the frames, prior to that time. The same tire pumps were carried on CA95s, CB92s and all 250-305 Dreams up to 1963. Some controversy exists about the fuel tank badges, as the early ones were marked “Honda Dream 250” or “Honda Dream 300,” whereas the 1964-later bikes all had either “Honda 250” or “Honda 300” markings. The 1964 badges carried a -279 product code, which indicates a Honda CY78 parts source. In the US, that was the only part on the machine that carried a 279 code part, but all of the chassis began to carry a CA78 serial number thereafter, even though the engines were always marked as CA77!

Batteries are often a challenge to locate for the early bikes, as they were tall, thin and wider than the CB72 batteries that Honda decided to install in the 1966-later machines. The early dry-sump Dreams had 6v systems, but all of the wet-sump bikes have 12v electrics. The starter motor and related parts are all interchangeable with those of the CB72-77 machines.

The first wet-sump Dreams came equipped with tiny rectangular tail light assemblies, which featured a single, unique, double-ended bulb that resembles an automotive interior light bulb. The tail light brackets were welded onto the rear of the fender sections. The long, dual lamp filaments proved to be quite fragile (especially when subjected to the tingle of the engine at certain rpms) and the illumination was less than satisfactory, at least for US standards. While 1962 models were equipped with the tiny tail lights from the factory, AHMC wound up replacing them at the dealerships with a “short lens” version of the CB72-77 268-code tail light assembly. By 1963, new bolt-on tail light brackets carried a generic “long lens” version of the CB72-style tail light assembly. Many early taillights were replaced by dealers as part of a factory update/recall of sorts.

Visually, the front and rear rims and hubs seem identical, but there were some subtle dimensional differences between the two, so there are separate part numbers for the two different rims. At the rear of the chassis, the “luggage carrier” components which fit around the upper rear shock ends were extended in the “late” versions to incorporate turn signal lights when used outside the US. Small flat plates were used to blank off the openings for the American market models.

Three different rear hubs were designed, incorporating two types of rear cush-drive dampers. The sprocket carrier is held into the swing arm by a long sleeve nut, allowing for removal of the rear wheel/hub assembly for tire maintenance without having to remove the chain guards, sprockets and drive chain. The sprocket carrier has provisions to incorporate four molded rubber dampers, which engage with four matching drive paddles cast into the hub assembly. The early style dampers clipped onto the edges of the carrier, while the updated ones had little extruded extension tips, which were
pulled through small holes in the sprocket carrier and snapped in place. The early style brake backing plates had grease-fittings installed to allow for lubrication of the brake cams.

Dream mufflers are now a very scarce commodity, plus there were several versions of Dream mufflers installed over the years. Originally, the Dream mufflers came with a sharp edge on the inlet side, onto which a “sleeve” gasket was placed. This gasket had a lip on one end to help seal and secure the “muffler packing,” as it is called by Honda. These early generation 1962-63 mufflers were made from stainless steel, instead of chromed steel used thereafter. Next, we find that the inlets were modified to house some small, circular O-rings, which had some chamfered lip sealing edges cast into the design. These early mufflers were all “two-piece” style, employing a separate header pipe to connect it all together.

In 1966-67, Honda tried to join the headers and mufflers together, using a crimped sleeve connection, which was spot-welded onto the header pipe. The flare on the header inlet necessitated a new design for the exhaust pipe joint (flange) and new split collars (from the CL72) to help join it all together. Additionally, a special engine bolt was created to help stabilize and locate the left side muffler onto the chassis, so there was quite a lot of work and expense to install the new, replacement “one-piece” muffler sets.

Two different types of standard low mufflers are seen for Dreams, including ones with deep recesses on the left side to give clearance for the end of the centerstand. The normal US-type don’t use this recessed area design and, of course, they both have different part numbers. Mufflers of all types are now extinct from the Honda factory, but a firm in Australia has taken the time and effort to make tooling for replacement mufflers, created in stainless steel. These new mufflers have a welded-in baffling system, but are still the two-piece design, which is generally found on most 250-305cc Dreams anyway.

Most rare are the mufflers for the CS72-77 machines, which were only sold in the US for one year, it seems. While the dual upswept headers/muffler sets looked almost identical to those of the CS71-76 dry-sump machines, there were differences in the sweep and angle of the header pipes and some of the bracket locations on the mufflers were slightly altered. Many parts on the Dream Sports were re-engineered to complete the installation. Among those items were: footpegs, side covers (split- horizontally), center and side stands.

Wet-sump Dream speedometers were sourced from Yazaki and Nippon-Seiki, originally. A few individuals have tried to make silk-screen or computer-generated overlay faces for the meters, but only a few speedometer shops seem capable of repairing either style successfully. As with most other early model Hondas, the high beam indicators didn’t come standard on US spec bikes until 1964, so numerous
speedometer faces are necessary to cover all applications.

The ignition switches for Dreams can be found in either 5-position or 6-position types. US-spec bikes have the 5-position switch, whereas the Euro models, which had an extra running, light inside the headlamp, used the 6-position switch, so the running lights could be used as a separate function. All US machines came with sealed-beam bulbs, but the domestic/Euro models had separate, replaceable headlight bulbs, along with the previously mentioned running light. Turn signals (or “winkers”) were never a part of the US specifications for any Honda street bike until 1968, so finding parts for the signal system on bikes that found their way into this country has been quite a challenge.
Posted by MrHonda (Bill Silver) at 8:39 PM