Even though more than 300 cars and motorcycles have passed through my hands in the past 50+ years, there are always a few that you wonder about… “I wonder what happened to that ____?
At a recent motorcycle auction in Las Vegas, a bike showed up completely unannounced and unnoticed in the day’s auction lineup. As I was casually watching the parade of bikes head up the auction ramp, suddenly there was a “CR93 Replica” Honda being offered, based upon a CB160 with a LOT of modifications added on. As it was being announced, a haunting feeling came over me: That was MY bike back in the late 1990s! I got caught up in the auction fever and some part of me thought I should really own that bike again, so I bid and bid and eventually won the auction, but at a fairly high price.

After it was rolled back to the “sold” bike lanes, I went over to it to see just what I had just purchased and to verify that it was, in fact, my old bike. It was in far better condition than when I sold it off to a man from SFO, who asked if I knew where he could find a CL175 5-speed engine for it after the sale. I did have an engine, but it was all torn down for inspection. No matter, he had it shipped back up to him in the Bay Area and I didn’t hear about the machine for a good 15 years. It was sold off on eBay some years ago and I did receive a brief note from the buyer asking if I had owned it before. After that, nothing more came of the bike until its magical arrival in Las Vegas last month.

I trucked the bike back home and went over the details more closely. The first area of concern was that I really couldn’t reach the rearset controls due to my knee replacements over the past 2 years. I wobbled around the block on a quick test drive and then resolved to move the pegs forward as much as I could. The footplate mounts were modified CB77 Super Hawk parts which bolt right onto a CB160 chassis. Even the most forward mounting points are clearly much more rearward than the stock peg setup, so moving them all the way up seemed the best plan. That did work for the shifter side, but the modified CB160 brake cable bracket would not allow the pegs to be moved more than one spot forward before it contacted the exhaust system.

The bike started up quickly, however an oil leak appeared at the tachometer drive unit seal. I happened to have a -425 code (CB750 DOHC) tach seal on hand, so that was repaired quickly. The engine sounded fluffy when started and the spark plugs came out black from excessive fuel. Dropping the float bowls revealed a heavily soldered right side float which still leaked internally causing it to sink and raise the fuel level up excessively.  New floats and float valves were ordered and that remedied the running problems.

I had barely returned home from Vegas auctions before I received an email from a car wrangler friend who sent photos of 5 CB72-77s rotting away in the coastal town of Coronado. He had bought a 1967 Mustang GTA from a widow, which was riddled with rust holes but was the real-deal S code car. Parked next to the car was a fleet of corroded, seized-up Super Hawks waiting for someone to rescue them which he photographed and sent to me.

I swung by to have a look a few days later, but was immediately corralled by the next door neighbor who had purchased three “nice Super Hawks” from the widow who was clearing out her deceased husband’s rolling stock. When I met her, she commented that she knew me and that her husband bought the “red” café style CB77 from me back in the early 1990s. It all came back to me in a rush of memories about what had happened to the bike since I had sold it so long ago.

As mentioned, her neighbors quickly grabbed up the “nice bikes” and split the cost of the trio; two stock black CB77s and the “Red café bike,” which they were willing to sell to me for what they paid for it. Once I recognized the description of the bike, I knew it was my old one-off 1962 CB77 with a Type 2 engine and a bunch of CYB72 “racing parts” attached. They asked if I knew anyone who could work on these models and I answered in the affirmative…

I arranged to come back the following week and pick up one of the black bikes for revival and to see the “Red bike” which hadn’t been available to be viewed on the first visit. It was like “old home week” when I looked inside the neighbor’s driveway and saw the still shiny (I had powdercoated the chassis) 1962 CB77 just as I had sold it, some 25 years before. We loaded up both bikes; I paid for the red one and brought it and one of the black ones home for some long overdue maintenance and revival.

Details on the Red bike: I vaguely remember buying a basically rolling chassis CB77, partially because it was cheap and that it had a Type 2 engine installed. The serial numbers for the 1962 Type 2 engine are CB77E-26xxxx, with the 6 denoting a Type 2 engine installation from the factory. The bike was torn down, powdercoated a matching Scarlet Red and the engine rebuilt with a 336cc big bore kit installed.

Back in the 1990s, you could still run across the various CYB72 “race kit” parts for sale and apparently I wound up with a racing fork bridge, clip-on handlebar set, steering damper kit and special bolt, steering stopper to prevent the handlebars from hitting the fuel tank, alloy rear fender, fork cover clamps, a racing seat and rearset shift linkage rod and shift lever. A fresh speedometer was installed in the loop-styled fork bridge and everything was pretty much rebuilt at the time. The electric starter was left off the motor for lightness and a better “racing look” effect.  The stock 1962 mufflers are stainless steel and the tail light was the correct (for 1962) short lens unit. I fashioned a little bracket to mount the tail light and license plate, but attached it to the base of the seat pan instead of drilling into the alloy fender.

Unfortunately, there was 25 year-old gas in the fuel tank, so extensive cleaning of the fuel system will be required. The carburetors did come apart without too much struggle and only the throttle cable was damaged from someone trying to open the throttle with stuck slides. The old tires were Avon branded, but in the correct sizes. The brake backing plates have the early style brake cams which use a self-locking nut to secure the brake arms. Apparently I was unable to find new nuts so drilled flat nuts for safety wire retention. 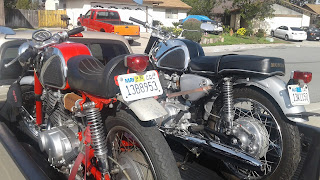 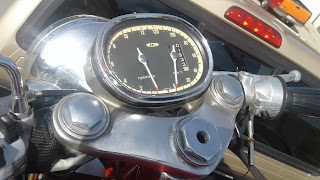 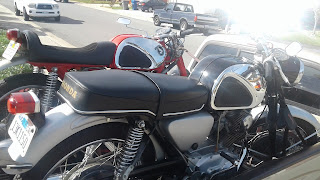 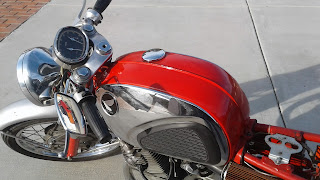 It’s going to take time and money to rehab the bike back to normal running condition, but I am looking forward to hearing it roar once again, after 25 years.
Posted by MrHonda (Bill Silver) at 8:56 PM