Someone didn’t read the book… How wrong can you be?

Well-intentioned efforts to rescue at least one CB77, from a stash of 5 bikes which sat outdoors, near the ocean, for some 20 years can involve a lot of twists and turns in the adventure.

My friend Steve, whom I steered towards the horde of Super Hawks (and a couple of other strays) has been sifting through several engines in hopes of finding one that was worthy of repair and overhauling. The first engine removed had cylinders full of corrosion, rust and other contaminants. Unfortunately, that engine was the match to the best of the CB77 frames in the pack. One of the bikes is a PI issued CB72 250 Hawk, so while some of the lower end parts are interchangeable, the top end components and crankshaft are all of different specifications.

On the second engine pull, Steve was shocked to discover cylinders with brand new pistons and rings, nestled in nice honed bores, all ready to go to work. The valves in the head were all new replacements and it looked like the best path to success, once the engine was completely disassembled for a thorough cleaning and inspection of the internals. With the top end already dismantled, it was time to turn attention to the lower end in hopes that the crankshaft, rods and transmission components were all in similar condition.

At first glance, it was noted that the infamous crankshaft locating pin on the rotor end of the crank was pushed up into the engine case and the displaced chunk of aluminum was subsequently glued back down in place. Unfortunately, the patch seemed to be displaced once again, so it seemed like more troubles could be lurking below. And so they were…

The kickstarter cover was still mostly in place, however it was broken in half and just shards of aluminum remained attached to the lower edge of the bottom case. The case and stator were removed to allow access to the rotor for removal. Normally, the central bolt is a special one with a 14mm head. This bolt had a 7/16” sized bolt head holding the rotor onto the end of the crankshaft end. Once the rotor was dislodged from the crankshaft snout, the back side of the starter clutch looked pretty much destroyed with the wrong screws installed and rollers and the back cover plate damaged severely.
There won’t be any reusing of those parts in the future.

I use a long #3 Phillips impact bit to loosen the clutch cover screws, hitting the bit with a hammer first, then using an impact drive to twist them loose enough for removal. That process worked well and the clutch cover came loose after some use of a plastic mallet and even some screwdrivers to pry along the edges. Once the cover was removed, the outer oil filter boss was seen as dimpled in a few locations where someone had tried to pound it onto the clutch cover without regard to the position of the oil filter shaft locating pin. The thrust washer was nowhere to be found and the order of installation of the crankshaft washers and nut were somewhat incorrect. I happened to notice that one of the primary chain rollers was split down the sides! The clutch assembly looked new, but the plates were all stuck together from sitting for so long.

With the forward sprocket, primary chain and clutch outer basket removed as a unit, the shift shaft slid out of its position easily. Standing back to look at the whole side of the engine, it was shocking to find that the primary chain tensioner and bracket hardware were all missing! Not only that, there was a strange-looking bolt in place of the stopper bolt for the kickstarter shaft end. When the bolt was removed, it was found to be a self-tapping oil drain plug, not a transmission stopper bolt! It was way too short to even begin to contact the end of the kickstarter shaft end as designed. All it did was to plug a hole.

The bolts for the shift selector parts were not very tight, but nothing had dislodged after the reassembly. From the looks of it, the engine was never run at all after the aborted attempt to reassemble the engine correctly. Thank goodness for that miracle!

With the whole clutch side of the engine cleaned off of components, it was time to split the cases to see what kind of shape the transmission was in and how far off the crankshaft bearing pin hole in the main bearing was located.

The cases had been sealed with Permatex gasket sealer; fortunately the non-hardening type. With the bottom case pulled up and away a look at the transmission gears and shifting seemed to be somewhat normal with some minimal gear dog overlap on the countershaft gears. When the countershaft was removed to inspect the kickstarter pawl function, the end of the shaft was damaged, the pawl was loose inside the engine case and the end bushing had a huge gouge along the edge of the bushing face. My best guess, forensically, was that the kickstarter pawl was installed backwards, which causes them to fly out of the end of the kickstarter shaft end, where the pawl interfaces with the inside of the transmission’s low gear. The stepped, 14mm bushing was in decent shape, probably due to being replaced during the attempted repairs.

The main shaft and gears all seemed to be in serviceable condition and the assembly set aside for cleaning. With the transmission shafts and shift forks/drum removed, the last item on the agenda was the crankshaft. I already knew there was a problem with the rotor end of the crankshaft, however I was appalled to discover that all of the main bearing oil holes were in disarray and completely out of position. The rotor end main bearing was a ball-bearing instead of the normal roller type. This kind of substitution is generally used when the main bearing and crankshaft bearing surface on that end has been damaged.

As the crankshaft was lifted out of the engine case, I discovered that all of the other three crankshaft main bearing locating pins were missing! Without the locating pins to index the bearings, the mains can only get a little splash feed to lubricate the needle/roller bearings, instead of the normal flow of oil that trickles down from the upper end and is funneled into the main bearing feed holes. How can it get worse than this?

Well, it did, in that the oil pump drain bolt was discovered to be another self-tapping automotive drain bolt and one of the pump attachment bolts into the bottom case was an SAE bolt, instead of a 6mm metric bolt.

With the lower end all torn down and inspected, the cylinder head was brought to the bench for disassembly. There were signs of a lot of water going down the intake ports, but luckily the intake valves were both closed when the engine was installed back into the chassis. All of the valves had nice fresh margins, so were obviously new when installed. The camshaft lobes had scoring and discoloration consistent with a lack of lubrication. The rocker arms, however, were the early side-feed versions and really had no matching wear to that of the camshaft lobes. That’s very unusual! The camsprocket was in good shape, but the advancer shaft was stuck in place initially. The points cover had been left off the bike so the end of the point cam was heavily rusted and frozen in place. Things loosed up after disassembly and the point shaft might be reusable with some cleaning and polishing of the point cam lobe.

The pistons were mostly all shiny, however the top ring of one side was a little rusted into the piston groove, but finally loosened up with an application of penetrating oil and some gentle prying with a small, scribe-tipped tool. The cylinder bores still had a nice cross-hatch finish and should be perfect for refitting the pistons and breaking the engine in, as was originally intentioned.


Steve is faced with either having me rebuild this engine, which has non-matching engine numbers for the frame he will use OR he will bring the matching engine down for an attempt to penetrate the corrosion in the cylinders sufficiently to allow the cylinders and pistons to be removed so the
crankcase can be reused for the engine rebuild. I hope that no one has done the same thing to the other engine as what was done to this one by someone who just couldn’t read the book! 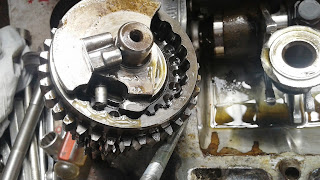 Kickstarter pawl found in the bottom of the engine after egress from the shaft end. 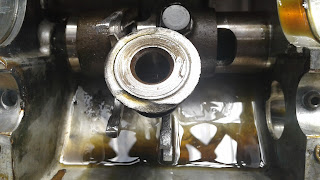 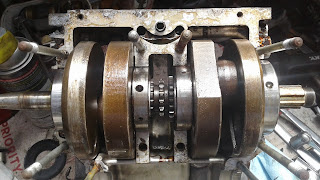 Crankshaft main bearing oil holes all out of alignment 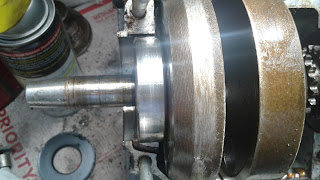 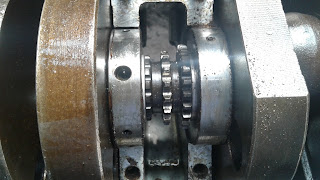 Ah, these holes are not supposed to be seen like this. 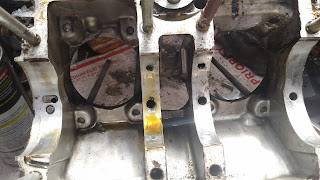 Locating pins all missing from the main bearing locations. 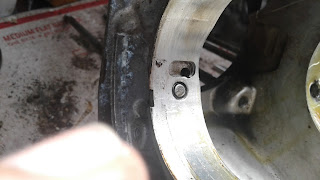 Rotor end of crankshaft had main bearing locating pin pushed into the engine case.
Posted by MrHonda (Bill Silver) at 12:05 AM