Most people think of the standard CB72-77 Super Hawk in conventional terms; a flat-bar machine with a dual seat, a 180 degree-firing crankshaft engine design, dual carburetors, a 4-speed transmission, stopped by 200mm DLS brakes and rolling on 18” wheels/tires. Honda made something over 137,000 Super Hawks for worldwide distribution from 1961 to 1967, in various guises; some of which have never been seen or are seldom seen, even to this day.  Even in the beginning of the 1961 production machines, there were exceptions to the conventional CB72-77 models.

What is not shown clearly on the Honda production chart above are these unusual versions:

CM72 models, primarily 1961 and some early 1962 editions. These bikes were a cross between a Dream and a Super Hawk; solo seat, luggage rack on the back, single-carburetor, 360 crankshaft, rotary gearbox, single Scrambler-type speedometer, sidestand, winkers, early tail light.

CBM72 models, standard 250 Super Hawks, which have Type 2 engines installed. I have owned at least one of them and have seen others.

The Type 2-powered bikes used a 360 crankshaft, left cam with different master spline location, Dream points/point camshaft, special mounted twin-lead coil/condenser and a TYPE 2 labeled point cover. The cam timing was normal CB series lift/duration and carburetion was normal to any other CB. While there were Type 2 engines installed in 250cc Scramblers, no Type 2 engines were used in 305cc form. However, the 305cc CYP77 Police models did have Type 2 crankshafts.

In 2002, I was able to rebuild a genuine CYP77 Police bike, but the original engine was missing. I did come up with some engine cases that were stamped CP77, but the second digit (9) was not present, because they were for a non-Police application. I purchased a new Dream crankshaft for the 360 firing order. I ground off one of the splines on the left camshaft, which allowed the correct 360 degree firing. Fortunately, a genuine Type 2 ignition coil and condenser was available from a source in Canada to complete the installation, as close to original as possible. Because the Police bike rotary gearbox components were not available to me, I used a conventional CB77 gearbox with X’d gears in the transmission. The bike turned out well, with good low-end power and strong mid-range, too.

The oft-mentioned 1962 Type 2 CB77, currently in the stable of bikes, was built in the early 1990s and was treated to the then-available CYB racing parts, including the alloy rear fender, shift lever/rod, fork crown, clip-on handlebars, special fork cover clamps, hydraulic steering damper, steering stop and the factory racing seat.

I can’t recall exactly how I came upon the chassis in the beginning, as it was definitely not a US spec model. Following the domestic Japanese frame numbering system used in the first few years, the year is stamped in the middle of the frame number, so the frame is CB77-62-260474, where the 6 denotes a Type 2 engine that year. Honda used 4, 5, 6 and 9 as designators for Type 2 engine models through the years, although the 9 also designates a CYP77 Police model.

Honda stamped CP77 on both Police and non-Police versions, calling the Police model a CYP77 in the parts books (282 product code). The regular CP77 (281 product code) was a standard Super Hawk equipped with high handlebars, winkers, side stand, solid footpegs and the early style tail lights only seen in the US on 1961 CB77s. CP77s used that same tail light through 1965-66, while the rest of the export models used the more conventional CB72 generic tail light assembly from 1963-66. 1967 model bikes received the oval tail light treatment, along with some chrome fenders on the last 200 machines built.

Some sources report that many of the CYP77 Police models were used by the Army in Malaysia or Indonesia, back in the 1960s. There is ONE bike in Norway and perhaps TWO in the UK. Very few have ever come up for sale or even in photos. My CYP77 came out of Canada, where they did bring in a limited quantity of bikes and stocked parts for them briefly. There are several Facebook pages for vintage model Hondas, including a couple for the 250-305 Super Hawks. Recently a CYP77 was revealed in as-found condition down in SE Asia, but that is a rare occurrence these days.

Super Hawks are celebrating their 56th year anniversary of their release. While really good originals or even carefully restored bikes are becoming more scarce, you can see that there were many, many bikes produced and a good 68,000+ were sold right here in the US.  I got mine… go find yours! 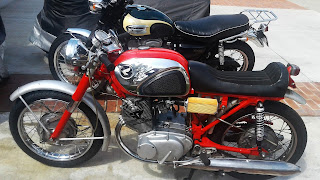 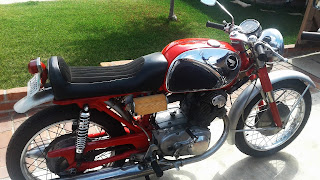 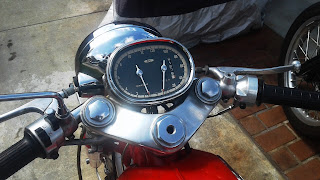 Honda CM72 image from a show in Thailand 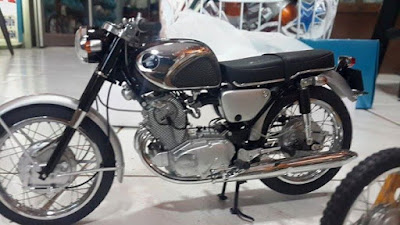