Wheels, rims, spokes and all those funny angles…

As long as I am embarrassing myself this month, I have to confess to another miscue that was based upon observed problems in the past, coupled with mis-identification of parts.

That Scarlet Red 1962 CB77 had been carrying one of the DOT stamped rims up front since it was built back in the 1990s. Aficionados of restored vintage Hondas really don’t want to use the replacement rims which Honda was required to produce and sell since the early 1980s. There is nothing subtle about the big DOT required rim labels, in this case “J 1.60x18 7 84 DOT” vs. the little tidy “DID” logo in between the spoke holes, plus 1.60x18 lightly stamped nearby on the flat edge in this case.

I had already purchased CB77 spoke kits from Marty Mattern at 4into1.com as the spokes on the bike were pretty corroded, having sat not far from the ocean for 25 years. The chrome on the rim was remarkably good, but seeing those giant letters was distracting. New tires had just arrived and the plan was to re-spoke the wheel and install new rubber for safe driving duties. While digging around beneath my work table, I discovered this apparently unused 1.60x18 DID rim which I had no recollection of acquiring whatsoever. It seemed like divine intervention to have a perfectly good rim show up like that to replace the ugly DOD version so after a bit of cleaning up, I was ready to take on the rebuilding task.

Once the tire was pried off the old rim, the corroded spokes came out fairly easily and the rim/spoke swap began in earnest. Unfortunately, when the spokes were sorted out, there were 19 inner spokes and 17 outers packed into the kit! Not a good start already…

The spokes all installed without difficulty, however once the nipples were snugged down evenly the spoke angles were all a bit “off” with gentle curves coming out of the nipples and across the expanse to the hub. That’s not right, obviously! After taking a couple of photos of the misguided spokes, I jumped to the conclusion that the spoke kit was one of those errant versions from Thailand that I had seen in the past on various Dreams and some Super Hawks. Some of those rim/spoke kits had severely kinked spokes once they were tightened up and I figured that must have been what happened here… cheap spoke kits!

I fired off photos to Marty to show the results of the spoke job and wanted to know if he had other complaints of them in the past. According to Marty, they have sold over 100 kits without complaints. Well, how could that be? Obviously, I was fairly certain that I was dealing with OEM Honda parts in the rim and hubs, which had been aligned perfectly before I changed the spokes. The rim looked correct, and was the same size as those of the CB72-77s which never changed through the years. When you see a DID rim with 1.60x18 stamped on it and it has a 36 hole pattern, it MUST be for a Super Hawk, right?

Well, after exhaustive comparisons between the OEM spokes and nipples and the a/m kit parts, only a few minute differences were apparent, but perhaps they were sufficient to cause this problem. None of it really made sense as I tried to noodle it out in my mind. All that was left to do was to pull the wheel off and apart, once again and compare the rims carefully, side-by-side.

Using a digital micrometer, I measured out the distances between the first two spoke holes on each rim, just beyond the valve stem hole. Well, they were just slightly different in that measurement. So I expanded the measurements out as far as the caliper would allow, which was about four holes apart and the figures came out substantially different, to the tune of a millimeter and a half as I recall.

I stripped the rest of the spokes from the hub and rim and switched back to the DOT rim for reassembly. Lo and behold, the spokes straightened out just fine without any kinks or bends coming out of the nipples or across the expanse between the nipple and the hub! So, apparently, the “CB77” front DID rim was, in fact, a rim for a Honda CB160 instead! The CB160 has a 180mm brake vs. the 200mm brakes on the CB72-77s, but the flange holes must be fairly close to the same in allowing the 160 rim to spoke up to the CB77 hub with just a little bit of deflection in the spoke angles. Ah, another lesson learned and to be shared with those who might/may have encountered a similar situation. The similarity of the two rims was certainly sufficient enough to fool MrHonda, so don’t let it happen to you, too!

After apologies to Marty and his supplier with emails entitled “Mea Culpa,” I think I learned my lesson on this one, for sure. However, there ARE rim/spoke kits out there from SE Asian sellers, which were made to either Benly or CB160 specs but being offered as replacements for full-sized Dreams and Super Hawks. So “buyer beware” on those offerings and check with others, on the various forums, who have encountered problems and successes with these wheel kits being offered from across the sea.

Thanks to Marty Mattern at www.4into1.com for his patience and understanding, as I muddled through this problem which had nothing to do with the quality of his products. While I was in the midst of discovering the actual cause of the problem, a phrase from that popular song by the group Level 42, called “Something About You” goes:And it's not so wrong; we're only human after all,” kept running through my mind.

Yes, even MrHonda is human after all. 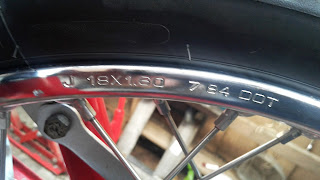 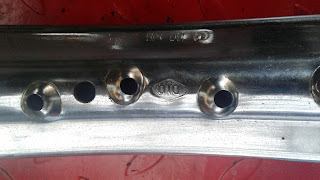 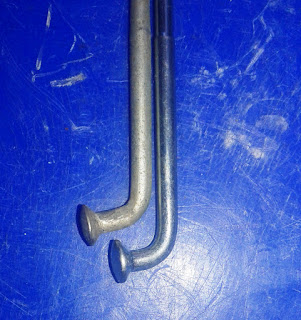 There ARE differences between the two spokes. 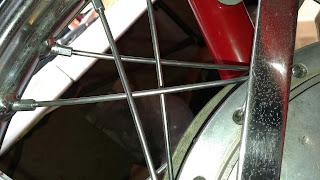 Bent spokes on the first attempt. 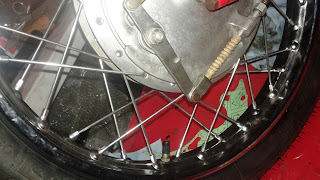 Success in the end, returning to the original DOT rim.