Fuel Petcocks (sometimes referred to as Fuel Valves) generally have three positions to control the fuel flow into the carburetors. OFF, ON and RESERVE are the three options and all must be functioning properly for a safe, well-fed motorcycle. Most of Honda’s early petcocks had a fuel bowl attached to the bottom, which trapped water, dirt and other debris from heading down the fuel lines towards the carburetor float valve, the float bowl and jets. Simple maintenance is to turn the fuel valve OFF (check either a punch mark alignment with the lever retention plate or use the lever as an “arrow” to indicate the direction of the fuel flow in each position) and then unscrew the sediment bowl carefully (use a rag to catch the overflow).

Clean out the bowl, inspect the filter screen that is usually held in place with the fuel bowl O-ring and reinstall. Turn the fuel lever to ON and watch for any leaks at the bowl/body interface. If there are fuel leaks, either tighten down the bowl a bit more or turn valve OFF, remove the bowl, O-ring and screen and replace the necessary parts to ensure a good seal. DO NOT leave your motorcycle unattended with a leaking petcock!

The least that can happen is that the tank empties out all over your motorcycle and onto the ground, contaminating the area with raw gasoline, which is toxic and very flammable. The worst thing is that the bike catches fire from an external ignition source and you lose the whole thing.

When you have leaks around the fuel lever, drain the fuel tank, remove the tank from the bike, drain the fuel bowl, remove the O-ring, screen and then remove the two screws that hold the outer lever plate onto the petcock body. Again, use rags to control spills and be careful about the potential for fires and damage to your machine. Once the plate is loose, the lever, tension spring and plate will all come off as a unit. The 4-hole sealing gasket in the petcock body can be inspected for tears or flattening and replaced as necessary. In emergencies, you can rotate the gasket or turn it over and reinstall the lever parts to help control leaks. Use of a new gasket is preferred, along with inspection of the flat side of the lever surface, where it contacts the gasket.

Fuel can often etch the face of the lever surface and allow minute fuel leaks to pass by the edges of the gasket, causing continuing fuel seepage. If you see this condition, use a flat file or some mild emery cloth on a flat surface to carefully flatten the surface of the lever for a positive seal once it is assembled again. 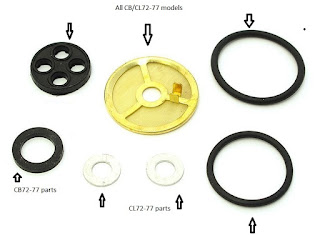 It is wise to remove the entire petcock unit, periodically, to check for sediment contamination in the RESERVE passage at the bottom of the petcock body. The petcock, for most models, has a small brass rod that rises up inside the fuel tank, accessing fuel to a certain level. Once that tube end is exposed, it becomes necessary to switch the fuel lever to RESERVE, which will pull the remaining fuel from the bottom of the fuel tank, through a small passage in the petcock. Old fuel, condensation, rust and debris can easily clog the fuel passages in the petcock, causing fuel flow difficulties. Usually small drill bits, inserted by hand can clear most of the passageways, so the fuel can freely flow through the petcock body.

Replace the petcock O-ring that seals the body to the bottom of the fuel tank. On the 160s, 175s, CB72-77s and many of the 350-450s, the nut that connects the petcock to the fuel tank nipple has a special flat sealing gasket inside that must be replaced and carefully threaded to both parts at the same time, ensuring that the ends of the two parts are sealed in the middle of the nut.

Later model machines, like 350-450s, use a special nylon screen that covers the petcock's inlet fuel passages and feed tubes. This screen must be checked for tears, damage and wear to ensure clean fuel feeding the carburetors. 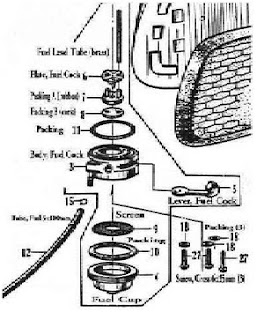 The petcocks used on the 250-305 Dreams, CB92, CA95, CA160s are unique in design and require careful assembly with new parts to ensure that there are no fuel leaks around the lever. Many of the petcock sealing parts are interchangeable between the Benly and Dream models. The bottom of the fuel tanks must be clean and able to receive the petcock O-ring, plus the screw holes must all be sound, to insure that the three retaining screws will hold the petcock body tightly against the fuel tank. The 5mm screws are JIS thread, which are very difficult to find now. For best results use OEM Honda replacement parts for Benly-Dream petcocks. Most aftermarket kits do not fit well, especially where the three central holes fit into the base of the petcock body.